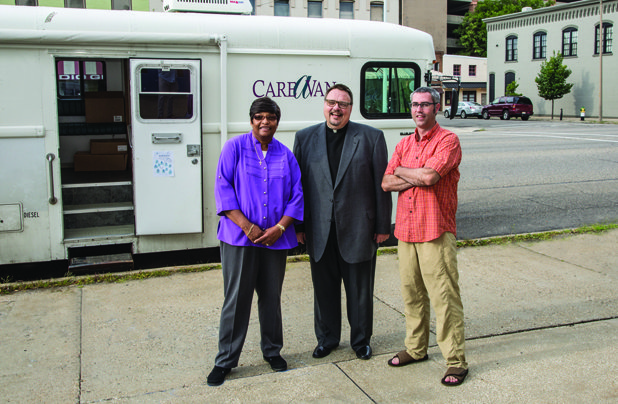 From left: Lucinda Stinson, the Rev. Dr. Randall Warren and Joe Bower stand in front of the mobile clinic that will temporarily serve as a free clinic in Kalamazoo.
Faiths come together to meet community need

When it comes to health care, 10,000 to 15,000 Kalamazoo County residents are believed to be uninsured, underinsured or undocumented, says Lucinda M. Stinson, deputy director of community services in the county’s Health & Community Services Department. Stinson further estimates that 20 percent of these residents — more than 2,000 annually — would visit a free health care clinic if one were available.

Thanks to the initiative of Stinson and many other deeply dedicated persons, such a clinic — the United Interfaith Free Health Care Clinic of Kalamazoo County (UIFC) — will soon be operating.
The area used to have a free clinic, the Free Clinic of Kalamazoo, which closed in 2010 after organizers determined the clinic was duplicating services already available in the community.

But the Rev. Dr. Randall Warren, priest at St. Luke’s Episcopal Church and executive director of UIFC, says a clinic to serve this population is still necessary for the physical and emotional health of disadvantaged individuals as well as the social and economic health of the community.

“Regardless of where you stand on the issue of affordable health care or of undocumented folks having health insurance,” Warren says, “the simple fact is that everyone without insurance who goes into a medical crisis, receives treatment in a hospital emergency room and can’t afford to pay (for it) raises the cost for all and adds stress to the community’s health care system.”

Warren and Stinson, who served as UIFC executive director prior to her employment with Kalamazoo County, say that the name of the United Interfaith Free Health Care Clinic defines its purpose.
“We want this clinic to be all-inclusive, not a clinic that sees some but not others. Therefore, the word ‘united’ came to mind,” Stinson says. “Also, all of us involved have a faith-based compass, regardless of our chosen religion. Therefore, we included the word ‘interfaith.’”

In regard to the word “free,” Warren emphasizes that all the world’s religions espouse free health care as a basic human right. “Buddha didn’t charge people to heal them. Muhammad didn’t tell people he needed money to pray for them,” he says. And Stinson points out that Jesus helped both the rich and the poor, all at no cost.

The clinic will be staffed entirely by volunteers. It will also be an affiliate of Volunteers in Medicine (VIM), a national organization that works with individuals and groups interested in developing free health care clinics for the uninsured in their local communities.

Warren adds that volunteers’ efforts, along with medical supplies donated by the community, will enable the clinic to also be “free” of government sponsorship. “The moment we take a cent from the government, there are limits on who we can see, and we don’t want there to be any limits,” he says.

The clinic will be located at First Baptist Church, 315 W. Michigan Ave.. “This is near the hub where homeless and uninsured people congregate,” Stinson says. “It’s three blocks from MLK Park, one block from Bronson Park and near the Gospel Mission, Ministry with Community and the Rickman House.”

The location is also close to Kalamazoo’s main Metro Transit depot, providing some convenience for persons who reside in the city’s and county’s outer reaches. And it’s less than a mile from the Western Michigan University and Kalamazoo College campuses, making it convenient for the student populations as well.

Joe Bower, the elected lay leader at First Baptist and the church’s primary liaison with UIFC, says his congregation is expressing “a lot of excitement because the clinic offers an opportunity to share the space we have.” The congregation is looking to utilize unused areas within its church building, and Bower says the United Interfaith Free Health Care Clinic is a prime opportunity.

In addition, Bower is thrilled that the downtown churches are working together. The board fostering this cooperation calls itself “Faith Square” and includes members from First Baptist, First Congregational, St. Luke’s Episcopal and First Presbyterian churches. The UIFC project also involves congregations of the Northside Ministerial Alliance, in part because of Stinson’s membership at Mt. Zion Baptist Church.

Bower says the effort follows the spirit fostered by Kalamazoo’s founder, Titus Bronson, who intended that the land surrounding Bronson Park be developed for religious, governmental and public-service facilities.

The UIFC governing body and volunteers ready to serve include clergy, pharmacists, health administrators, nurses, chiropractors, therapists, social workers, faculty and students at WMU’s School of Medicine and College of Health and Human Services. Other volunteers without medical experience can assist with patient check-in and other non-medical activities.

The clinic will begin seeing patients one evening a month this fall, potentially as early as October, in a mobile bus it will commission from Community HealthCare Connections in Calhoun County. In the meantime, remodeling of First Baptist’s educational wing to provide a permanent site for the clinic is set to be completed by summer 2016.

The clinic’s operating schedule will be promoted through the religious community and social-services networks. “We will add hours as need requires and resources allow,” Warren says.
Both Stinson and Warren emphasize that this clinic, which has 501(c)3 nonprofit status, will blend seamlessly into the county’s current health care systems.

“The clinic could become a medical home for those who don’t have a primary health care physician,” Stinson says. “But our role is to partner with other health care providers. If a person with a primary care physician comes to see us after hours, we will call the physician’s office the next day to relate the patient’s condition and the services we delivered.”

“We see the medical world as a web of relationships,” Warren adds. “We intend for this free clinic to sit firmly in that web.”

The Need for A Free Clinic

Regardless of where you stand on the issue of affordable health care or of undocumented folks having health insurance, the simple fact is that everyone without insurance who goes into a medical crisis, receives treatment in a hospital emergency room and can’t afford to pay (for it) raises the cost for all and adds stress to the community’s health care system. 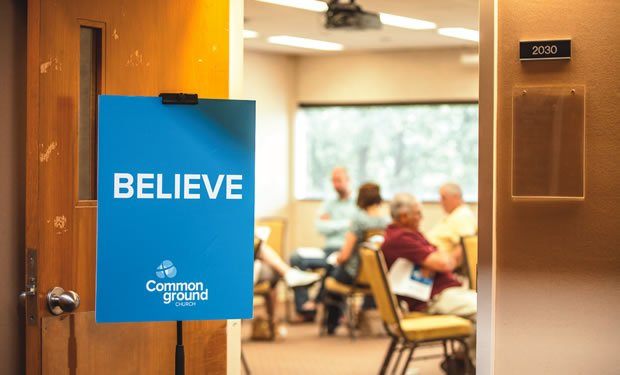 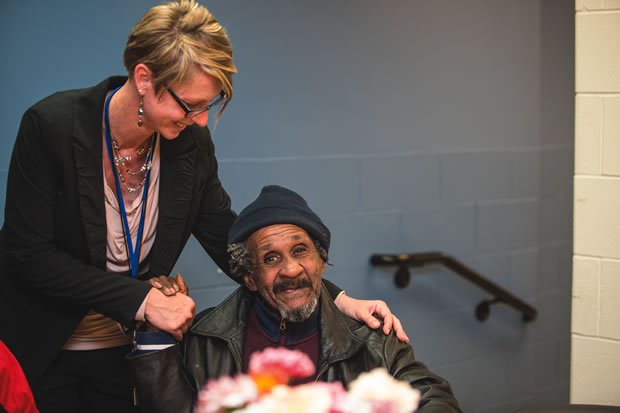