In the spring of 2016, when Dave and Shari Groendyk visited Inglenook, a pocket neighborhood in Carmel, Indiana, one thing quickly became apparent: its neighborliness.

The Groendyks, owners of Dave’s Glass in Texas Corners, were there on a scouting mission to see about building a pocket neighborhood on some land they owned near their shop. As the couple strolled Inglenook’s sidewalks and Shari snapped photos of houses, a resident relaxing on his porch called out to them, “Hi, can I help you?”

“And the next thing we knew, we were taking a tour of his home,” says Shari.

After the tour, the three stood outside chatting when a couple of women approached them, looking for the home of someone hosting a bridal shower.

“Tell me their last name,’” the man asked the women, says Dave. “They said ‘Smith’ or whatever, and the man said, ‘Oh, yeah, a street down. Second house on the left.’”

Residents of pocket neighborhoods know the surrounding houses by the families that live in them, Dave explains, not by their street addresses — and that’s the point. Neighbors actually know each other.

“It’s all about community,” Dave says.

Porches are a must

That visit was enough to compel the Groendyks and five other investors to develop Belle Meade, a new pocket neighborhood in Texas Corners.

The idea isn’t necessarily new. A similar concept to the pocket neighborhood was used in the historic Radburn development in Fair Lawn, New Jersey, in the late 1920s and early 1930s. The original concept there, “the Radburn design,” was based on English “garden city” models and involved an entire town, but bankruptcy of the city housing corporation left the project incomplete, according to the website of the PBS station WTTW. The neighborhood that was developed, however, with homes facing shared common areas, was declared a National Historic Landmark in 2005, according to the Radburn Association’s website.

Fast forward almost a century and the idea has been reborn, but is now called a pocket neighborhood. Ross Chapin, owner of Ross Chapin Architects in Langley, Washington, coined the term to describe a neighborhood where there are “nearby neighbors coming together around a shared space.”

“Pocket neighborhoods are set up in little pods,” Dave explains. “You have five houses facing five houses and common space in between.”

At Belle Meade, the occupants of a pod’s 10 houses decide collectively how to utilize their common space. They might, for example, decide to construct a gazebo or fire pit or plant a flower or vegetable garden. Another characteristic that distinguishes a pocket neighborhood from typical housing developments is design — it’s not a “cookie cutter” kind of place. The houses’ exterior designs, which highlight front porches, are throwbacks to the 1920s or 1930s, Shari says.

As for the pocket neighborhood in Texas Township, another thing that distinguishes it is its colorfulness. “We encourage color — bright, vivid colors,” Shari says. “There’s always a need for a white house and a gray house, but we love it when they (the homeowners) do things outside the box and choose a soft blue or yellow or red or something like that.”

A decade ago, Shari first learned of pocket neighborhoods while reading a story about them in Parade magazine and was immediately intrigued. But other distractions kept her interest at bay.

“I had kind of stepped away from the business (Dave’s Glass) a little bit because our grandkids were starting to go into day care,” Shari explains. “So my job was to pick up whichever one of the four’s turn it was to get picked up.”

Shari says she anticipated being the only grandma picking up children, but in reality “it was mainly grandparents that were picking up the kids.” While talking with those other grandparents, Shari learned that many had relocated from Chicago or the east side of the state to help their children raise their grandchildren.

Pocket neighborhoods kept popping into her thoughts. “By having houses facing houses, with the sidewalk and everything in between — that’s how you get to know people,” she says.

From research to reality

In 2015, the Groendyks began researching the idea of building a pocket neighborhood in Texas Township, on 10 acres of land they had purchased in the 1980s. They developed Texas Corners Plaza on the front of the property, and, Dave says, they could have built more businesses, but they believed a pocket neighborhood would better serve the community. Belle Meade is a 55-year-olds-and-up community, Shari says, although a HUD law requires that 20 percent of the development’s residents be under that age.

Texas Township is one of the fastest-growing townships in the state — its population has grown 17 percent since 2010, according to U.S. Census Bureau data — and the community needs more housing, Dave says, especially for township residents who want to downsize but don’t want to leave the area. The Groendyks themselves fit into this category.

“We are so intrinsically a part of this community,” Shari says. “We’re both on committees over at the township. I do the elections. He’s on the DDA (Downtown Development Authority). We don’t want to leave our community. This is our home.”

Wayne and Cheryl Cavanaugh, who moved into Belle Meade in August, formerly lived in a home on 12 wooded acres in the township.They loved the rural lifestyle, Wayne Cavanaugh says, but, upon becoming empty nesters, realized their “nest was way too big.” The couple looked at condos and townhouses but didn’t want to share walls with neighbors and weren’t into the cookie-cutter appearances those developments tended to have.

“We wanted something that we could put our own stamp on,” Cavanaugh says.

“The variety of house sizes, the old-time feeling of an active neighborhood, owning a custom home and small yard without the labor and time (the association handles this) and being nestled in our great little village of Texas Township was too intriguing to resist,” Cavanaugh says.

The Cavanaughs say they like having so many businesses and recreational opportunities within walking distance, including restaurants, fitness centers, physician offices, dog grooming and the Al Sabo Preserve. “While we have all this access, we are tucked into our own private and quiet little enclave surrounded by tall evergreens,” Cavanaugh says.

So far, 10 houses have been built in Belle Meade, with a total of 48 houses planned. House sizes range from 1,200 to 1,800 square feet of living space, and all of the houses have basements. The homes’ interiors can be customized by homeowners and have so far proven as distinct as the exteriors.

Take a home currently under construction, for example. “It’s going to look like a Florida house,” Dave says. “It’s got these beautiful, bright colors.”

A nod to history

Before going into business with her husband at Dave’s Glass, Shari was a reference librarian in the government documents area of the Kalamazoo Public Library. Understanding the importance of history, Shari wanted to incorporate Texas Township’s past into Belle Meade.

“I had a blast going back into the (Local) History room and researching about who the founding fathers (of Texas Township) were and how this (township) came about,” she says.

Belle Meade’s clubhouse is named for the year Texas Township was founded: The 1838. The house models are named for six of Texas Corners’ founders: The McClin, The Campbell, The Ambrose, The Towers, The Bishop and The Julia.

The Julia bears the name of Julia Mills Morton, an early teacher in the township. Morton was trained at the (former) Cedar Park Female Seminary, in Schoolcraft, and went on to teach for schools in Kalamazoo and Van Buren counties. Based on Shari’s research, when Julia married Owen P. Morton from Texas Township, she became one of the township’s first teachers.

Even the names of Belle Meade’s streets, such as Switch Grass Ridge, Milkweed Trail and Coneflower Cove, were chosen by research.

“They’re all named after native plants that thrive in Michigan,” she says.

In April 1978, when Dave Groendyk approached his wife, Shari, about starting their own glass business, he was met with a bit of resistance — Shari thoroughly enjoyed her occupation at the time as a reference librarian at the Kalamazoo Public Library.

“He dragged little Shari kicking and screaming out of the library,” she jokes, laughing. “We started our business, and the rest is history.” 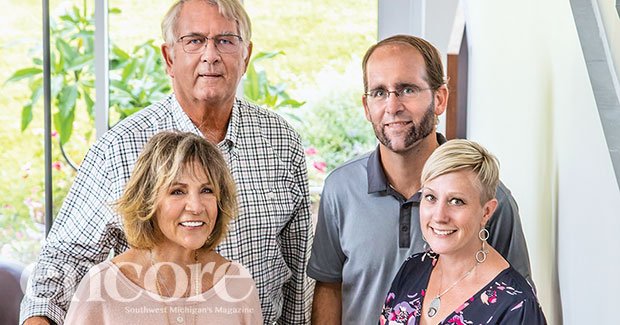