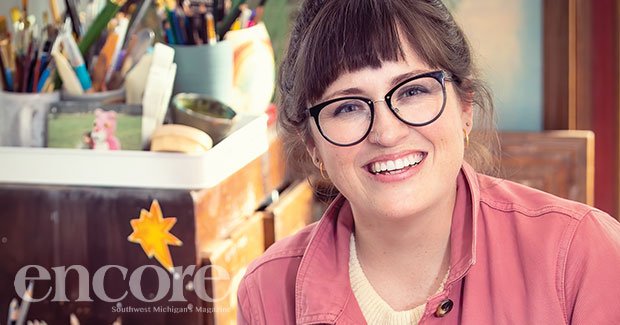 Emmy Kastner in her studio, where she has authored and illustrated four books in the Nerdy Babies series of children’s books. © 2020 Encore Publications/Brian Powers
Writing and illustrating feed the soul of Nerdy Babies creator

Emmy Kastner knew from an early age that she was a writer, but it took her decades to say it out loud.

“It’s such a weird thing because, in retrospect, I have been a student of picture books and children’s books my whole life,” she says from her Kalamazoo studio, located above Factory Coffee, the North Side coffee shop her husband, Dan, owns and operates.

Decades ago, it was another children’s author, Jon Scieszka, who first told a very young Kastner that she was a writer. “I told him I wanted to be a writer, and he told me as long as I was writing anything, I already was a writer,” she says.

That was in fourth grade. But, despite that nod from someone she looked up to, Kastner admits she fought imposter syndrome well into her adult life.

Today, however, she proudly calls herself an author and illustrator. She has had four children’s books published by Macmillan Publishers. They’re part of her Nerdy Babies series, which explores subjects related to nature and science. She also has two more books in the series coming out soon and has a stand-alone children’s picture book in the works.

Kastner is originally from Ortonville, Michigan. After graduating from Western Michigan University, she taught high school science and language arts, first in Battle Creek and then in San Francisco. Although she and her husband loved California, they returned to Kalamazoo, where she co-founded the nonprofit youth literacy program Read and Write Kalamazoo (RAWK) with Anne Hensley and served as its co-executive director until 2018.

Through all the moves and changes, Kastner says, art and storytelling have been constants in her life. But her writing and illustrating career and creative process have come a long way since her father first handed over an electric typewriter to her. She laughs as she recalls that she skipped most of the creative process for her first book manuscript, “The Bear Who Came Alive,” which she wrote in elementary school and that was based on her stuffed bear. “I just went to town,” she says. “I went straight to final draft.”

That first book is still unpublished, but it started Kastner on her path. She created the Nerdy Babies series after watching her daughter memorize and recite her picture books. “I thought it would be great for kids to learn about science in the same way,” says Kastner.

With that spark of an idea, she created the first two Nerdy Babies books, Nerdy Babies Space and Nerdy Babies Ocean. As she wrote the stories, the characters — a cast of babies that Kastner illustrated and developed as an inclusive representation of scientists — came to life.

Kastner lets the characters take turns being the lead character of their own book, and she spends about six months writing and illustrating each book. Using inspirations from her love for science and nature and her children, she has had a different creative process for each book, she says. “I kind of go with the flow for every book. Some start with visuals. Some start with the theme or idea.”

While Kastner has drawn from the knowledge she already had as a science teacher for the first books, she says as the series grows and the topics expand she spends more time researching and reaching out to expert scientists for vetting. The next two books in the Nerdy Babies series will focus on dinosaurs and transportation and will hit store bookshelves in 2021.

“What’s really fun about writing this series is that it is not 100 percent essential for the readers to read all of the books in order,” she explains.

Kastner’s latest book project came about after she created a painting of three leaves that turned out to look like characters. She stepped back and realized there was a bigger story to be told. Words and more images followed, resulting in the book A Very Big Fall, which will be released in 2022.

Kastner says she devotes time each day to creating art. She works from her studio, a large, open space that she currently shares with her three kids while they learn remotely. “I love to paint,” she says. “I love the traditional medium. It’s exciting to me.”

Kastner says she finds inspiration for her books in unexpected places. “I’m in a lot of different places when ideas come up,” she says. To make sure the inspirations are not lost, she keeps a running list of ideas on her phone and always carries a sketch pad.

“I love art, and I love storytelling,” she says. “There is something magical when those things collide.”

“I love art, and I love storytelling. There is something magical when those things collide.”