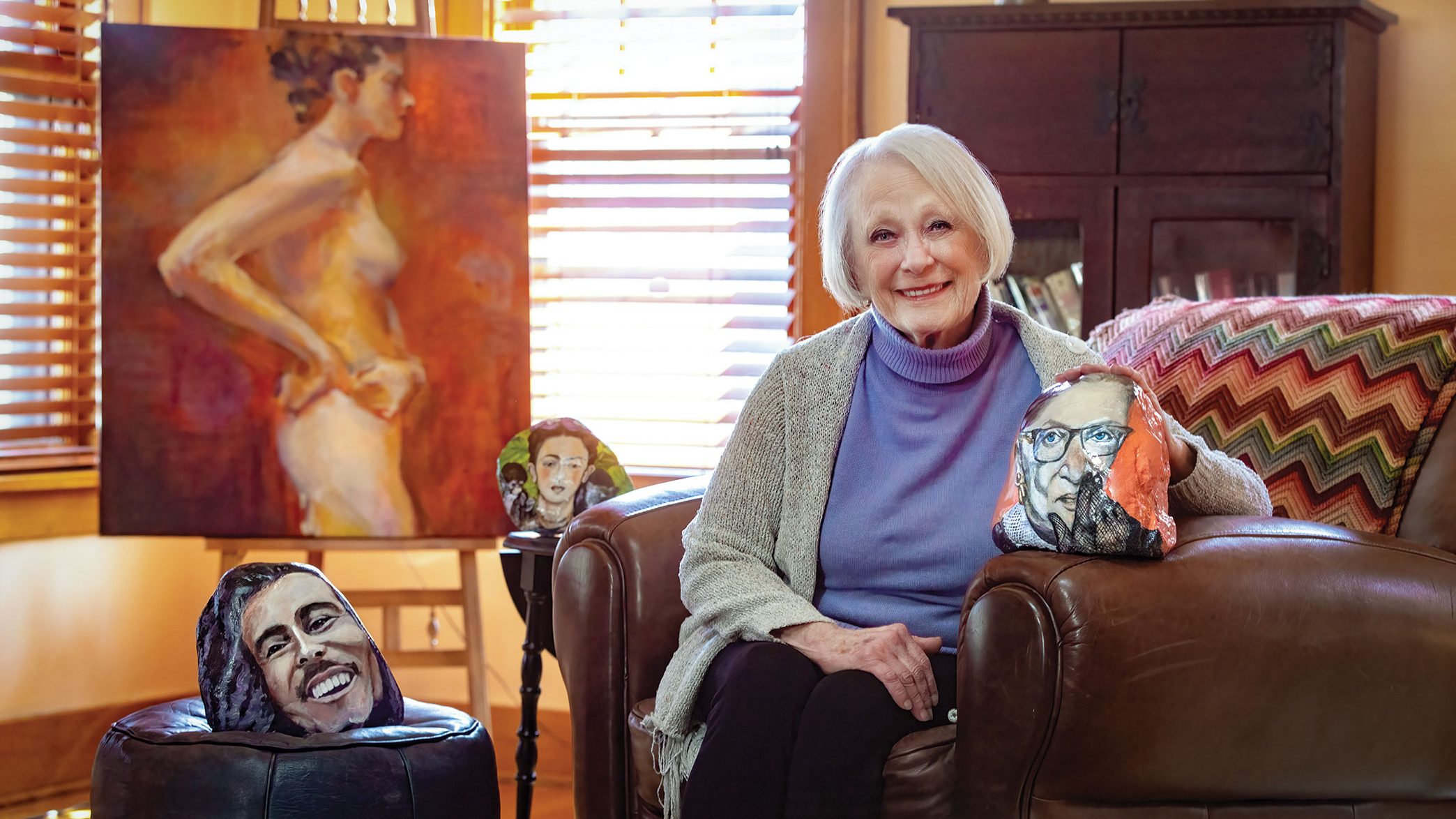 Jacqueline Tafoya with some of the artwork she’s created on canvas and stone. Tafoya makes the most of a rock’s structure, such as her paintings of a Jimmy Choo shoe, owls peering from a hole and a singer. Photos courtesy of Lora Branson.
Jacqueline Tafoya creates mini-masterpieces on stone

Retired school librarian and artist Jacqueline Tafoya loves to paint. She has painted everything from furniture and cigar boxes to large murals on the exterior of her home. But lately she’s been painting rocks — nearly all day every day — in preparation for her June 3 Art Hop exhibition at the Kalamazoo State Theatre.

She has painted such famous people as the late U.S. Supreme Court Justice Ruth Bader Ginsberg and actress Marilyn Monroe but has been mostly painting rock stars and musicians such as ZZ Top, the Supremes, Prince and Janis Joplin, a theme fitting for the music venue where she’ll show her art. Speaking from her cottage in Plainwell, where she “spent the morning with Willie Nelson,” Tafoya says she has been working for three months on a portrait of Bob Marley.

“I’ve looked at so many photos of him, trying to get his eyes right — I love eyes, the more expressive the better. Even harder are his teeth,” she says. Painting Marley’s dreadlocks was easy, however. “I splashed lavender paint over purple, and it worked.”

This will be the third Art Hop Tafoya has participated in, but she remains as humble about her work now as she did when she first exhibited it.

“Truthfully, I was embarrassed,” she says. “In my view, my art was amateurish. None of my work on canvas sold, and now I paint for fun without expecting profit.”

An art lover from the start

The 77-year-old Tafoya, who was born in Kalamazoo, was raised by grandparents who had little money for extras like art supplies.

“I recall wanting to paint something, anything, and found a partial can of house paint and a hardened paintbrush in the basement. I smoothed out a grocery bag and produced a sticky mess. That didn’t invite a lot of encouragement,” Tafoya says. “Books, however, were free to borrow from the wonderful, magical Washington Square Library. I became hooked on stories in those pre-television years.”

After graduating from Loy Norrix High School, she received a bachelor’s degree in English and a master’s degree in librarianship from Western Michigan University. She served 32 years as a school librarian and media specialist in Berrien Springs, Bronson and Harper Creek schools before retiring in 2005.

“I remember attending a student art show in college and being awestruck by the beauty of one painting in particular: a perfect rose,” she says. “It was an epiphany. I now believed two things: I could never do anything so beautiful, and art would never give me security, so I turned to my second love, books, and didn’t take a class in art for nearly 50 years.”

Tafoya discovered after retirement that Kalamazoo Valley Community College offered free tuition for students 62 and older (KVCC confirmed that this is still true).

“I took every art class they offered — some of them several times for the sheer joy of learning. I loved the instructors, the unintimidating atmosphere, and the society of young people,” Tafoya recalls, noting that she participated in three art shows, was awarded first place in two of them, and was delighted to shop for art supplies with abandon.

Known for murals too

People living in the Westnedge Hill neighborhood might know Tafoya’s home on Westnedge Avenue from the murals she has painted inside the home — they were photographed for the Kalamazoo Gazette more than 20 years ago to be featured as the Gazette’s “House of the Week.” Some of the murals have been painted over since then, but those that remain include a Tuscan landscape.

“They were my attempt at trompe-l’oeil,” Tafoya says, referring to art that involves a visual illusion.

She says she once was offered a commission to paint a ceiling at Henderson Castle but refused it. “I truly could not imagine painting on my back like Michelangelo. Besides, he had helpers!”

Her rock art has snowballed

Tafoya took to painting rocks for fun about 12 years ago, selling some through eBay until shipping costs grew too expensive.

“Why rocks? Because they’re available. My husband and I live on an island in Pine Lake in Barry County for nine months a year. It offers solitude, privacy and rocks galore,” she says, crediting her husband, Dorian Ross, with keeping her supplied. “It’s much better than a dozen roses.”

“My plan was to paint a few as gifts, but it snowballed into 400 and still counting. I’ve painted almost every animal, from insects to elephants,” Tafoya says. She adds that sometimes a rock suggests what
it can become, as, for example, a rock she painted as a Jimmy Choo shoe. “Those are my favorites.”

At the moment, she is hoping her husband will find just the right rocks on which she can paint Aretha Franklin, John Lennon and Elvis Presley.

The styles of the images on the rocks vary: They can be whimsical, such as comical snowmen or the Cheshire Cat looking down on Alice, or detailed and lifelike portraits of animals and humans.

“I was surprised when people actually spent their hard-earned money on my rocks, but Lora’s and her husband Steve Amsbury’s encouragement and Steve Stamos’ support have given me a mission and purpose. I am a proud painter of rocks,” Tafoya says.

Tafoya paints many different sizes of rocks, from pebbles to boulders weighing upwards of 30 pounds, and plans to have a range of paperweight-size painted rocks on sale for as little as $15. Most recently,
her rock painting of Prince sold for $75, her highest price yet.

“I hold a rock in my hands and wonder about its antiquity,” she says of her unusual medium. “I look at its scars and crevices and think about my aging self, both of us shaped by our journey.”