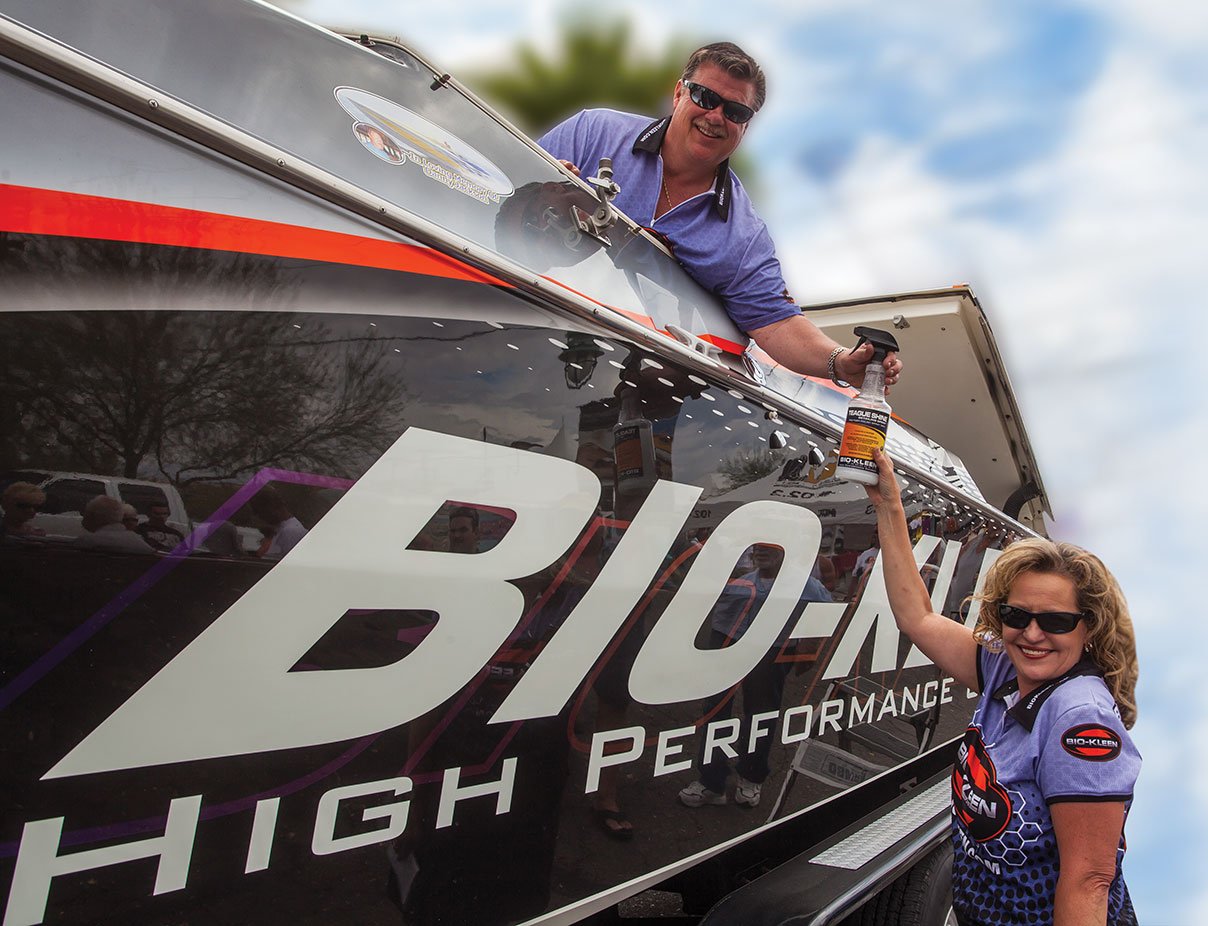 Making the world a little cleaner one product at a time

In 1985, a friend of Tim Kowalski’s who worked at a prominent local business told him about how his company was using a cleaning product for its machines that had carcinogenic properties. Kowalski, a recent chemical engineering graduate of the University of Michigan, decided he would help fix that problem. He created an environmentally friendly parts-washing soap, and the company loved it.

Bio-Kleen today looks different than it did then. Originally, Bio-Kleen produced and distributed parts-washing products for industrial use for about a decade, until a suggestion from an accountant changed the trajectory of the company. Kowalski’s accountant told him about the big community of boaters in South Haven who were dissatisfied with marine and boat-cleaning products that were currently on the market. A boater himself, Kowalski decided he could help fix that problem too, and he created what is now one of Bio-Kleen’s best-selling products, Amazing Cleaner.

Like the parts-washing products that preceded it and all the products Bio-Kleen has created since and sells now, the spray-on Amazing Cleaner, designed to clean boat and RV vinyl and fabric of mold and mildew stains, is biodegradable and non-aerosol.

“I had a friend in marketing that told me, ‘Do you wanna spend all your time on fun stuff? Or do you wanna spend all your time on a bunch of boring stuff?’” Kowalski recalls. “The industrial side was doing okay and it was making a living, but I wanted to get into the more fun side of the work. If I’m gonna put in 60 or 70 hours a week, I wanna do something that’s going to be fun. When I came out with all the boat products, the marine side of it just really took off and everything else just fell into place.”

From its location at 810 Lake St., Bio-Kleen now makes more than 200 cleaning products for marine, RV, snowmobile, motorcycle, automotive, household, janitorial and commercial uses, all of which are environmentally safe, nontoxic, biodegradable and nonaerosol. The company has enjoyed double digit percentages sales growth year after year, according to Tracy Lynn Kowalski, Bio-Kleen’s sales and marketing director.

If you see a common thread in the company’s products, you are right: Kowalski likes his outdoor toys. Kowalski, who was born and raised in Paw Paw, says he loved any outdoor activity as a kid and spent a lot of time boating in South Haven and camping with his family.

“I realized that there was room for environmentally friendly products in the machine shop world as well as just the world in general,” Kowalski says.

Today many companies try to make their products environmentally friendly, but back in the 1980s that wasn’t the case, Kowalski says.

“When I first got started, a lot of my friends said, ’Nobody cares about biodegradability’ or ‘You’re gonna have a tough go at it,’ but I never really stopped growing from day one,” Kowalski says of his company. “As years passed, obviously I hit the bullseye. I thought that the market would fall that way eventually, that the biodegradable, safe, nontoxic products would fall into place.”

Something else that sets Bio-Kleen’s products apart from others, according to Kowalski, is that he and his wife, Tracy Lynn, are avid participants in the industries they serve, such as boating, camping and snowmobiling.

“Not only are we in the industries, but we’re sleeping and breathing those industries because we have the toys and we’re having fun with our fellow motorists, RVers, snowmobilers and motorcyclists,” says Kowalski. “So we understand the problems and how dirty they get and what creates those problems, and then I can create a product that fits that niche.”

All Bio-Kleen products are manufactured at the company’s facility on Lake Street from domestically sourced ingredients. The company currently has 15 employees. While Tim is the president of Bio-Kleen and is in charge of production, his right-hand woman is his wife, the company’s vice president and sales and marketing director.

The couple originally met as teenagers, in 1982, when both were on trips to Florida with their families. Tracy Lynn lived in Texas, and Tim in Michigan. They didn’t see each other for 25 years but were reunited in a meeting when the company Tracy Lynn worked for was considering carrying Tim’s products. A few years after reconnecting, Tracy Lynn was looking for a new job and applied to Bio-Kleen.

She began working for Tim in 2011, and, working side by side as friends, they became closer and closer. The pair married in May of 2017.

Tracy Lynn was raised on the water so she was a boater, but she says that, unlike Tim, she has not always been much of an outdoors person. Through Tim, though, she has learned to love the outdoors, although she admits that when it comes to camping, she is more of a “glamper.”

Looking at Bio-Kleen’s impressively long roster of products, it’s obvious that the couple’s interests — and knowledge of those — influence the product offerings, which range from a black-streak remover for RVs to a snowmobile engine degreaser. Many products have been found to serve dual purposes. A friend of Tim’s discovered that a product originally designed for RVs ended up working great on guns, so Bio-Kleen is now bringing the product to market as a gun lubricant. A customer swears by the company’s hull cleaner to get the rust stains from Kalamazoo’s notoriously hard water off her white shower tile.

“I’ve spent a lot of time putting the wow factor in the products so that when people try them, they know that I put my heart and soul into that product,” Kowalski says. “I work at a product until I wow myself, and once I wow myself I know everybody else is going to be wowed.”

Of the company’s 200-plus products, Amazing Cleaner and Amazing Armor are the bestselling products in the marine market, while its Black Streak Remover and its RV Roof Cleaner lead its sales in the RV market, Kowalski says.

And just as Kowalski seeks to create products to improve the activities he and his wife love, they also work to share the activities they love with those who might not otherwise have the chance.

The Kowalskis have been involved with the Make-A-Wish Foundation for more than 15 years, giving ill children the chance to experience the outdoor fun they are so fond of. Their participation started when Tim was put in contact with a child at the Chicago Children’s Hospital who was dying from leukemia and whose wish was to go on a fast boat ride.

“That always touched my heart because I was like, ‘Well, I’ve got a fast boat. I could take him for a ride.’ It’s what I enjoy doing,” Kowalski says.

“Fast boat” is a bit of an understatement. The Kowalskis own a 34-foot Sunsation CCX with triple 400R, which can zip along the water at 80 miles an hour. The couple, who travel around the country promoting their company at events like boating Poker Runs, make sure they arrive early enough to the events to give rides to underprivileged or special-needs children. The pair has also become involved with the Easter Seals and Wounded Warrior non-profit organizations.

“I’ve become successful enough that I wanna give back,” Kowalski says. “I felt like that’s what God gave me, to make me successful, so I could give back to the people that were less fortunate. I want to do something good for the world and give back. The more you give, the more comes back to you.”