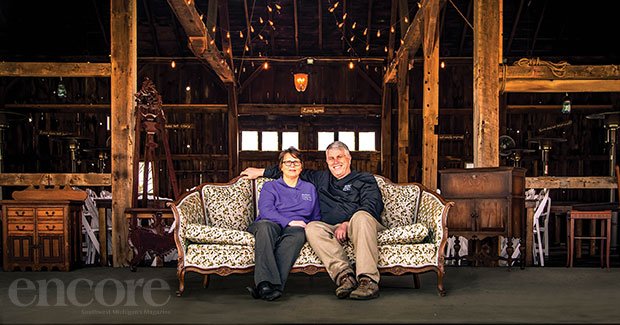 Cindy and Terry Blodgett sit on an antique sofa in the century-old barn they transformed into a special events venue. © 2019 Encore Publications/Brian Powers
Project for daughter’s wedding leads to event venue

When Terry Blodgett has an idea, he goes all out.

In 2016, when Blodgett suggested to his wife, Cindy, that they renovate the 1830s-era barn on their property in Schoolcraft for their daughter Bethany’s wedding, Cindy didn’t realize it would be more than patching a few boards and pouring a concrete floor. Much more.

“If I had known, really, how big of a project it was, I would have nixed it,” she says.

But Bethany, as well as some other couples and families, are happy the project didn’t get the ax. The Blodgetts transformed the barn — built during Andrew Jackson’s presidency, complete with dirt floors, milking stalls and haylofts — into a special event venue rivaling those featured on channels like HGTV or in magazines such as Country Living.

The guests at Bethany’s wedding raved about the barn. Members of the groom’s family told the Blodgetts about a barn in Berrien Springs that was rented for weddings and receptions and wondered how often the Blodgetts rented out their barn.

That’s all it took for Terry — who, with Cindy, co-owns Terry Blodgett Builders Inc. in Schoolcraft and Servpro of North Elkhart County, Indiana, a franchise that offers fire and water cleanup and restoration — to get started. In 2017, he built an addition to the barn that houses a 400-square-foot bar space, a 300-square-foot buffet space, a kitchen and bathrooms. Above that, Terry built a bridal suite, groom’s quarters and a family room, all of which have heat and central air conditioning.

The original barn has a 2,750-square-foot reception area with seating that accommodates 200 people. Immense barn doors open to overlook the 200-acre farm’s apple orchard, replete with a gazebo that is used as a site for outdoor ceremonies.

“I had people wanting to book 2020,” Cindy says. But the Blodgetts didn’t want to book that far ahead yet. She told them, “I need to at least get through a season and see how it’s working.” Their first year worked well, with 15 weddings held at the barn.

It’s easy to understand people’s enthusiasm. The upstairs bridal suite is filled with comfy chairs, abundant lighting and a lengthy mirror for doing hair and makeup. The adjacent room is a family gathering room, where family members and friends can visit with each other on cozy leather sofas before the wedding.

“Everybody really comments on this (the family gathering room),” Cindy says. “I don’t think there’s another venue that has this type of a space for extra people.”

The Blodgetts also paid attention to the décor. Cindy shopped at antique stores, estate sales and thrift markets for exactly the right pieces, and her effort paid off. People often comment on these features, she says, like the heavy-duty, well-constructed farmhouse tables used for wedding receptions. Even the chairs catch guests’ eyes.

“Nobody has the spindle-back chairs that look really nice,” Cindy says.

Being a family-owned business has proved to be advantageous, since there are plenty of family members to assist with the work. The Blodgetts have 10 children, ranging in age from 12 to 42, not to mention 10 grandchildren and an 11th on the way and the nearly dozen foster children the family had over a 10-year period.

At two events in a row at the Blodgett Wedding Barn someone forgot to bring a cake cutter, Cindy says, but the family came to the rescue with the utensil. Another wedding lacked a table skirt. Again, someone in the extensive Blodgett clan had one.

“You don’t want your day ruined because ‘Oh no! We ran out of forks!’” Cindy says, chuckling.

When the Blodgetts purchased their farm 20 years ago, wind blew through the farmhouse windows so forcefully the curtains waved, and cracks splintered the plaster walls and wood floors. The home’s refrigerator sat on the dilapidated porch, and orange shag carpet covered the house’s floors. When Terry first found the property, Cindy told him emphatically, “No way!” But Terry always went all-in on projects, she says, so she knew he would “make it right.” At the time, they didn’t foresee the Blodgett Wedding Barn in their future.

“This is what we decided to do for our (future) retirement,” Terry explains, then jokes that when retirement does happen, he can stay home and mow the grass.

“We’ll see how long he is content staying home and mowing the grass,” Cindy chimes in. “There will be some other new project that he will start.”

“He can’t do anything small,” she says, grinning. Terry smiles back. And he already has a new project to start: a lavender garden for wedding ceremonies.

“If I had known, really, how big of a project it was, I would have nixed it.” 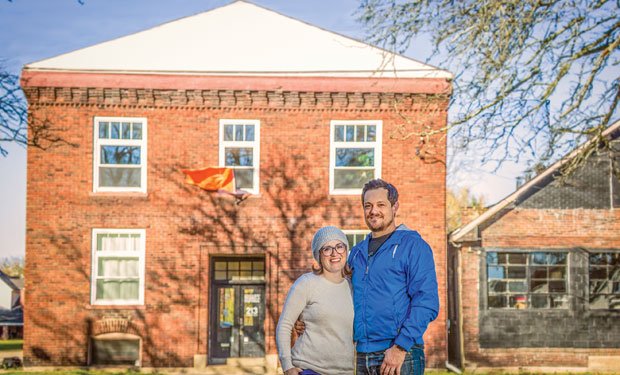