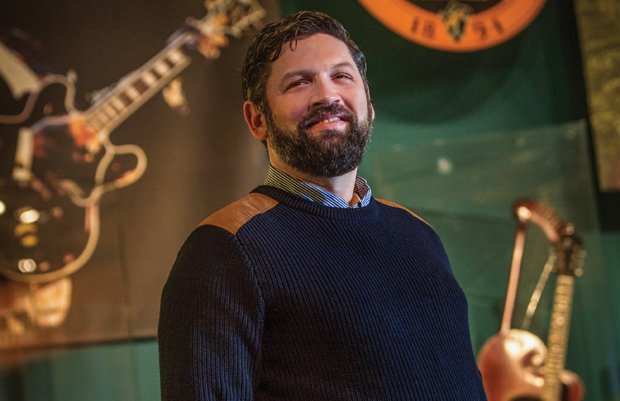 Chris Falk once got a job because he looked like Elvis, but it’s his passion for music that has kept him at the forefront of music promotion in the Kalamazoo area.

Falk, a native of New Orleans, is the organizer of this month’s Fretboard Festival, a celebration of stringed instruments and Michigan musicians scheduled for March 3-4. He’s also the muscle behind the museum’s monthly Friday Night Highlights concerts. In addition, he coordinates the Kindleberger Summer Festival of the Performing Arts and runs his own business, Kzoo Music Scene, which he describes as an entity that “creates festivals and opportunities for musicians and acts as an advocate for musicians.”

I worked for an art gallery in Sarasota, Florida, that closed, and felt like I needed a change and had family up here. After being unemployed for about six months, I started my business, Kzoo Music Scene, based on Sarasota Music Scene, which I had created and operated in Sarasota.

I heard about the special events coordinator job at the museum and that they were looking for someone to bump up their music and the concerts and festivals. I had 13 years’ experience in that area, so I thought I might be a good choice for the job.

How did you get your start?

When I was in college, I did an internship at a performing arts hall and it became a full-time job. Then my boss was indicted for fraud and bid tampering, so the whole department got fired. A friend of mine’s mom had a gallery that needed a director. I got the job based partly on my skills, but mostly because she thought I looked like Elvis. She was born on Elvis’ birthday and was a huge fan of Elvis. It was always really easy to get her a Christmas present — I just got her something with Elvis on it.

How has the Fretboard Festival changed since you’ve taken over?

The festival started in 2005, and when I came here six years ago, the festival had seven vendors, four bands and four workshops. I was very adamant about bumping it up a little bit, saying, “If it doesn’t grow, it’s going to die.” Now the festival is in two buildings — the museum and Anna Whitten Hall — and we have 15 performances, 10 workshops and 40 vendors, and we’ve added a kid’s section.

I work hard to keep things exciting and new, and still hold to the festival’s tradition as a celebration of instruments made in and around Kalamazoo and of musicians from the area and around the state.

That’s a lot for one man to do.

While nobody else actually helps me plan and put it together, there’s a team that makes it happen. The marketing team at Kalamazoo Valley Community College (which owns the museum) does a lot to get the word out. We have a sound company that takes care of the stages and getting bands on and off stage. And then it’s all hands on deck for museum staff, who are there the night before and the day of the festival. They are are so professional — they do what they are supposed to be doing. It’s seriously really easy for me that day.

Last year it was (estimated at) 3,700 people; the year before, 3,500. This year, though, we are coming up with a better way to calculate the numbers. We have two buildings, and in the past some people might have been counted twice. This year everyone gets a sticker and we’ll be able to tell from the number of stickers given out a more accurate attendance number.

How do you choose the performers for the festival?

I am kind of selfish when it comes to that. I think, “What do I want to see at a festival?” and then consider the budget and make a preliminary list of bands. I look for bands that are working their butts off playing at venues and festivals and who have an album out or one to be released. These are bands that are on people’s radar and will attract audiences.

We also choose two acts from the Play-In Contest in January. This year we had 12 bands we considered and chose two: Blarney Castle in the acoustic category and Last Gasp Collective in the electric category.

What has been your biggest challenge?

Getting to the next level. I would like to do more festivals outside of the museum in the community of Kalamazoo. The next level would be doing a festival with a bigger budget but that is specific to Kalamazoo — something like the New Orleans Jazz & Heritage Festival — that includes local and regional acts and a few national acts but that shows off what Kalamazoo is all about.

I love living in Kalamazoo — if you want to do something, you can get it done here. And if like-minded people can put their heads together, then a lot more things can be accomplished.

Love Where You Live

I love living in Kalamazoo — if you want to do something, you can get it done here. And if like-minded people can put their heads together, then a lot more things can be accomplished. 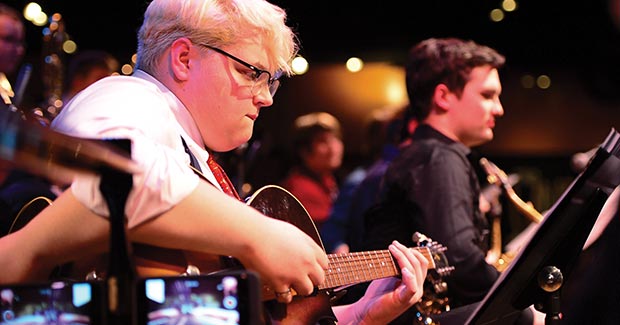