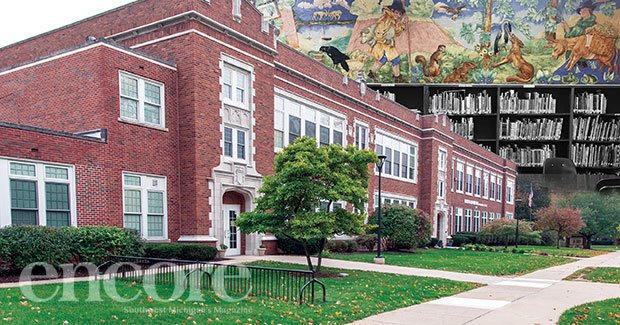 Our memories of school might include a favorite teacher, an unforgettable fellow student or a memorable class. Many people might remember some aspects of the buildings where they attended school, but they might not have paid close attention to specific details about a building or learned its history. Over our lives, we spend a huge amount of time in school buildings, as students, teachers, parents or staff members. Here I highlight some of my favorite Kalamazoo school buildings, looking at specific features that make these buildings special.

Many times school buildings reflect the theory of the day regarding which building design would be best for educating students. In 1945, Kalamazoo Public Schools began plans for a new multi-story junior high school. Within four years, however, those plans were changed to a one-story concept. Considered more economical, this design allowed for more daylight in the rooms. Noisier classrooms for shop and music were isolated to other wings. Other junior high buildings in Kalamazoo subsequently followed this plan. The new building, designed by Louis C. Kingscott & Associates and initially named South Junior High School, opened in 1951. The school became the Maple Street Magnet School for the Arts in 2001.

Woodward School for Technology and Research

Since Woodward School opened in 1880, several different school buildings have been located on this property. The fifth structure, designed by the local architectural firm Billingham & Cobb and completed in 1930, is by far the most elaborate. This company designed eight school buildings for Kalamazoo Public Schools in the 1920s, but the style chosen for Woodward Elementary School differed greatly from the style the company usually used. This classic symmetrical Georgian-Colonial Revival has a central portico decorated with six metal Corinthian columns 26 feet high and a second portico on the east side, both with fanlight windows. The central tower also is a unique feature, giving the building some stature. Since 1997, Woodward has been a magnet school emphasizing technology and research.

This building is the fourth high school on this site. The first was completed in 1858. The current building, an example of Collegiate Gothic style, has recessed arched entrances, crenelations at the top, and decorative buttresses on its front façade. Since 1972, it has housed a variety of Kalamazoo Public Schools programs, along with the already existing Chenery Auditorium. The sections completed in 1913, which were designed by the Grand Rapids architectural firm of Robinson & Campau, included the manual training building to the south and the gymnasium to the northwest. In 1922, voters approved construction of an additional Robinson & Campau classroom building spanning South Westnedge Avenue, with an additional classroom building on the north side and the auditorium, designed by local architect Rockwell LeRoy.

Parkwood-Upjohn is on my list not because I spent 11 years here as a parent volunteer, but because this building was originally two separate schools that are different architecturally. Parkwood, designed by Billingham & Cobb and opened in 1921, is an example of Collegiate Gothic similar to many schools built during these years. The Upjohn School, completed in 1939, served students who were visually, hearing or physically challenged. This Georgian-Colonial structure, designed by Detroit architect Albert Kahn, had aids for students such as handrails and padded benches. Artistically painted panels of fishing and gardening scenes are in the hallway. In addition, the library features a terra-cotta mural depicting some of Aesop’s fables, pictured below, and one of the classrooms has a tiled fireplace.

Choosing just one building on the Kalamazoo College campus is hard. Choosing the entire Quadrangle in the center of campus is easier. Kalamazoo College traces its beginnings to 1833. Its first building was erected on Cedar Street, between Park Street and Westnedge Avenue. The college moved to its current site in 1850. Plans to relocate the campus to West Main Street changed in the early 1920s when President Allan Hoben chose to have the college remain on its existing site and retain a small, intimate atmosphere, considered good for the students. Florence Robinson, a landscape architect and a former Kalamazoo College student who graduated in 1908, designed the campus expansion. Three new buildings were constructed between 1927 and 1932: a classroom, a library and a chapel. Added later were a student center and dormitory, completing the “Quad.”