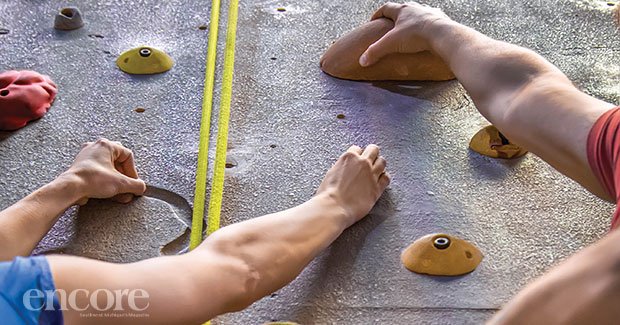 We all know that feeling: Sometime toward the middle of the summer you get that hazy, been-there-done-that mood that just can’t be cured by viewing a summer blockbuster, hiking in the woods or sitting on the Lake Michigan beach. You just need to do something different.

Luckily for us, Southwest Michigan offers a variety of recreation alternatives — from arcades of varying kinds to disc golf courses to indoor rock climbing — to get you out of the house and back to enjoying summer.

Get your game on

Who says recreational activity has to make you sweaty? Sure, video games aren’t the most physically strenuous activity, but they are definitely fun and humidity-free. Whether you like your video games old school or straight out of Silicon Valley, there are plenty of places in the Kalamazoo area to check out.
Klassic Arcade 1.0 and Klassic Arcade 2.0, in Gobles, should hit the spot if you’re craving a nostalgia injection, a little bit of competition between siblings or just a way to switch up date night. Housing 140 classic arcade games and pinball machines between them, these arcades have everything from Pac-Man and Donkey Kong to Joust and Space Invaders.

Owner Kevin Ketchum has spent more than 20 years collecting and caring for old school video games in his spare time. By 2003, he had accumulated enough to fill a warehouse and opened Klassic Arcade 1.0, at 22711 M-40. It has 60 pinball machines and classic arcade games, almost all of which were new in the 1980s. By 2016, Ketchum had more than 200 machines, giving him enough to open a second location a mile and a half away, at 206 S. State St. That site boasts 80 games.

Both arcades are open Saturdays and Sundays, with 2.0 open on Thursdays and Fridays as well.

And when customers pay to play at one arcade, they’re allowed to play at the other the same day without an additional charge.

Classic arcade games and Deadpool-themed pinball machines line the walls at One Well Brewing, at 4213 Portage St. as part of the brewery and restaurant’s eclectic décor. One Well opened in 2014 and the next year began hosting its own pinball tournaments and pinball league.

The first pinball tournament had only five participants, says owner and pinball lover Chris O’Neill, but the league now has 35-40 players.

One Well’s summer pinball league meets at 6 p.m. on the second and fourth Wednesdays of each month, beginning on June 12 this year. The cost to join is $5, which goes toward trophies and fees for the league to be part of the International Flipper Pinball Association.

“We have forged some great personal relationships through pinball and also gotten a lot better as a whole as players,” says O’Neill.

The brewery also holds weekly Two Player Tuesdays and quarterly tournaments. Both are open to anyone interested in improving their skills in a competitive environment. Two Player Tuesdays last from 8–9:30 p.m. and, aside from the 75 cents it costs to play the pinball machines, cost $1 to enter.

Tournaments are free to join, but don’t forget the coin drop.

“Anyone can join,” O’Neill says. “We have age ranges from children to blue hairs.”

Not feeling competitive? The machines at One Well are always ready to be played during its operating hours, provided there’s not a league or tournament players using them.

Want to go to Yellowstone this summer? Or brave a zombie horde? Step into Nova Virtual Reality, at 806 S. Westnedge Ave., put on a headset, and see the geysers or just about any other world of your choosing.

Nova uses HTC Vive technology and offers between 95 and 100 different experiences, according to Peter Bernhard, Nova’s night manager. One of his favorites is Superhot, a first-person shooter game in which time moves only when you deliberately move through an arena of knife- and gun-wielding figures attacking you, he says.

Recently, Nova updated the headset in the VIP room to a wireless HTC Vive headset with a battery pack that fits in a player’s pocket, allowing for more mobility, as opposed to a headset being connected by a wire to the TV screen, as with older models.

Customers can reserve rooms online. A social room for $20 per hour fits one to five people comfortably. The VIP room costs $25 and seats up to eight people. For those just needing to jump into another reality on their own, solo play costs $15 an hour.

Whether you’re looking for a little friendly competition or a laid-back activity that still gets you moving, disc golf might be it. Modeled after — you guessed it — traditional golf, disc golf uses your aim and flying discs rather than clubs and a ball. The objective is to toss the disc as few times as possible to reach a metal basket yards away.

While disc golf mirrors the structure of golf’s game play, the cost for equipment and play is not as high. A lower-end set of three discs costs about $10, and there are many free courses around the area.

Jennifer Sawyer, a professional disc golfer and director of Kalamazoo’s Women’s Disc Golf League, first started playing disc golf when a group of friends invited her out. “I was pretty much hooked from the start,” she says. “I love being outside with friends, and its low cost to play was pretty appealing.”

Sawyer started competing at an amateur level in 2008 and professionally in 2014. She still loves the basics of it and being outside with friends, but now her friends are her competitors, she says.

“My advice to anyone interested in trying disc golf is to just get out and give it a shot,” Sawyer says. “We all started somewhere, so don’t be worried about your skill level. Disc golfers are some of the nicest people, and most will gladly help out beginners.”

There are 36 disc golf courses within a 25-mile radius of Kalamazoo. Some are stand-alone courses, and others make use of spaces in public parks and on college campuses. You can learn about these courses at such websites as discgolfscene.com, discgolfcoursereview.com or pdga.com/course-directory.

Sawyer prefers the course at Oshtemo Township Park, 7275 W. Main St. “It’s a beautiful and technical course through the woods, with both long and short tee pads,” she says.

If you are interested in joining a league, K’Aces Disc Golf leagues play weekly in Vicksburg, Oshtemo and Kalamazoo. More information can be found on the organization’s facebook page: facebook.com/KACES-DISC-GOLF-209931286845/.

If you were one of those kids constantly yelled at to “get down from that tree before you break your neck,” this one’s for you.

Climb Kalamazoo, at 136 S. Kalamazoo Mall, has been taking people daring enough to strap into a harness to new heights since 1997. With more than 10,500 square feet of climbing surface, Climb Kalamazoo has routes that will challenge climbers whether they are new to the sport or have been climbing for years.

“Climbing has always been a place where I can come to find focus and clarity,” says Climb Kalamazoo’s owner, Philip Grimm. “There are so many distractions, stresses and anxieties that we all bear. When you’re on a climb, you are truly living in the moment — not only physically focused, but also mentally and emotionally fully present in that moment. And that’s true whether indoors or outdoors.”

Grimm, who bought the climbing gym in 2008 with his wife, Kristin, is an avid climber and practices both indoor and outdoor climbing, he says. The pair used to meet up for climbing dates at the gym, and his wife eventually became a climb instructor and manager of Climb before they had children.

“We started to raise our kids in here,” Grimm says. When the gym went up for sale, they jumped at the opportunity.

Climbers are encouraged to bring a partner to use one of the more than 30 top rope stations, which allow a person to belay, standing below on the ground attached to the cord that keeps the climber from falling in the event of a slip and helps them return safely to the gym’s padded floors once they’ve completed the route. Both climber and belayer are connected to the rope with safety harnesses.

Belaying keeps a climber safe when done correctly, but if a belayer is careless, both climber and belayer could be injured, so the staff at Climb give each new guest — and those who just need a refresher — a thorough lesson and supervise a test run before climbers are allowed to scale the wall. Participants also must be 14 years or older to belay.

However, if you decide to give it a go alone, Climb Kalamazoo also has seven auto-belay stations, a bouldering wall with sections that can be climbed up and over onto the upper level and a lead cave, inside which a handful of routes start with a climber on their back, hanging by the route grips. You won’t need a harness for the bouldering wall or for the lead cave, but you will need climbing shoes (which you can rent at Climb) since outdoor shoes are not permitted on the gym floor.

Indoor rock climbing started in the 1960s as a way for rock climbers to keep in shape during the winter and avoid injuries when the weather turned more favorable in the spring. As the indoor version of the sport gained popularity, people who had never climbed outdoors took it up as a way to exercise and meet new people.

“Climbing indoors has also brought me close to some of the most outstanding people you will ever meet,” says Grimm. “It has been an excellent way to connect with my community, and I’m very thankful for those people in my life.” And there’s air conditioning as an added perk!

Climb Kalamazoo offers a two-week unlimited trial that includes gear rental for $49 that is available only on your first visit. It also offers many other membership options. Equipment is available for rent at the gym. 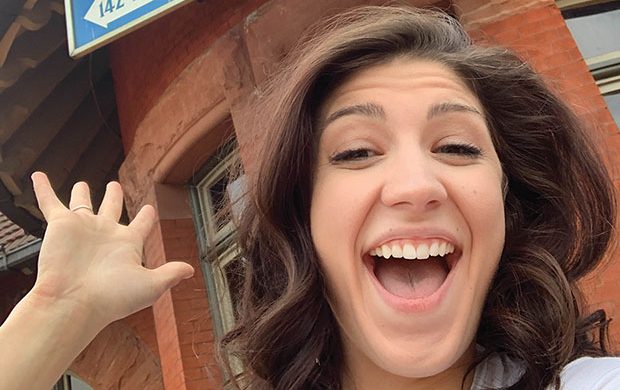