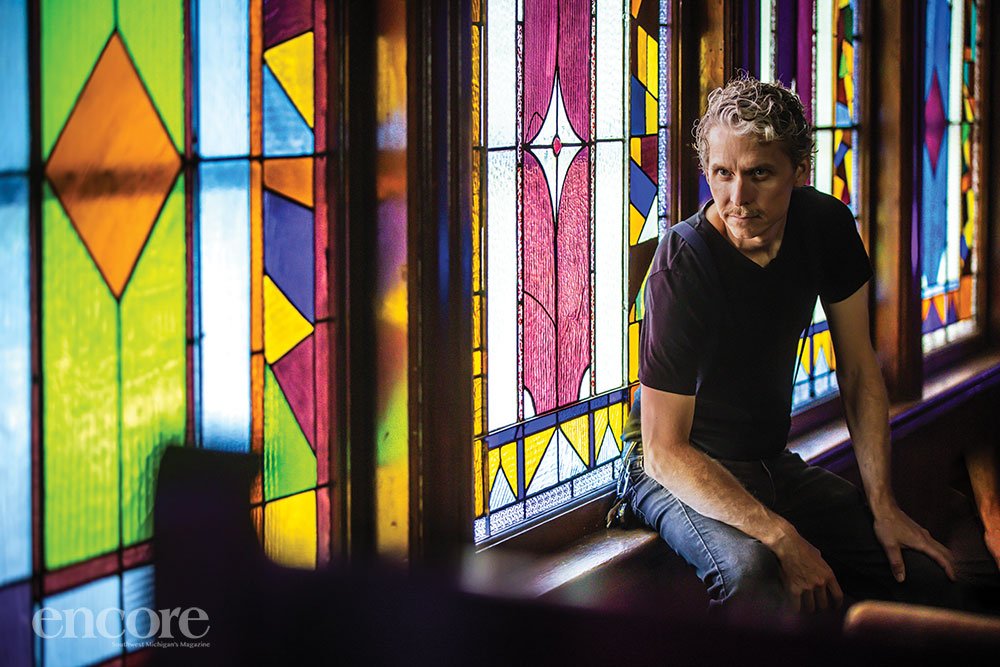 Dormouse Theatre founder Stephen Dupuie inside the theater — a former church — located at the corner of Portage and Lake streets.
Venue provides platform for many voices

The moment you step inside the Dormouse Theatre, at 1030 Portage St., the energy and ethos of the space assert themselves. Two naked mannequins flank the worn wooden stage of the former church.

Above the dais towers a grand wooden arch. Rainbows of light filter through stained-glass windows. The works of local artists line the walls.

It’s the unique vision of Artistic Director Stephen Dupuie that has turned this 200-seat performance space in the Edison neighborhood into a creative hub for a community of actors, artists and musicians and their offbeat performances of sketch comedy, scripted theater and music.

When asked about the spirit of the Dormouse, whose name comes from the classic Lewis Carroll novel Alice in Wonderland, Dupuie says, “Part of it has to do with where we are situated. We’re not downtown. I see us fitting into ‘alternative downtown.’”

The story of the Dormouse began in 2017, when Dupuie, a Michigan native and alumnus of Northern Michigan University’s performing arts program, decided to finally pull the trigger and launch his own venue. He initially cast a citywide net in his search for space, viewing several empty churches around Kalamazoo before noticing one on Portage Street, right down the street from where he lived.

“I have no idea why it didn’t dawn on me that it was sitting here, but as soon as I walked in and saw that,” he says, pointing at the wooden arch cresting over the stage, “I was like, this is it.”

After purchasing the 125-year-old building, he spent several years fundraising, organizing and repairing the building. He was prepared to open the Dormouse in 2020, but the opening was delayed by the pandemic. The Dormouse held its first public event in March 2021.

Now, after a year in operation, the Dormouse is continuing to find its place on the local scene. With a mission that Dupuie describes as “providing a platform for people to say what needs to be said,” the venue stages a new theater performance every month and hosts live music and a variety of other events.

Dupuie’s own Dormouse Theatre Troupe, which produces character-centered, “absur-dist and experimental” sketch comedy, has been a key player in the venue since the beginning and sets the tone for the kind of work audiences can expect to see there. The group doesn’t shy away from the strange or controversial — a recent show, for example, focused on drugs and featured skits about soccer mom ’shroom parties, sugar addiction support groups and a psychic who communicates with plants.

“One of my friends came to the show, and I talked to her afterward. She said she loved one sketch and thought it was so funny and that another sketch punched her in the gut and she couldn’t even laugh,” says Dupuie. “I walked away feeling like I did my job.”

Queer Theatre Kalamazoo, whose sixth Dormouse show, a staging of John Cameron Mitchell’s Hedwig & the Angry Inch, opened June 16, has also been a resident of the theater since the beginning.

“The moment I walked into the space, I said, ‘This is a queer theatre,’” says Connar Klock, the managing artistic director of Queer Theatre Kalamazoo. “It’s where these kinds of companies have a place to be and be together. It has a certain dress-up feel to it while still being accessible, underground, us.”

Face Off Theatre Company, which presents work by artists of color, is also a Dormouse resident and collaborated with Queer Theatre Kalamazoo in May to premiere Dirt, Ash, Dead Tree, a work of magical realism by Jarrett McCreary that touches on themes of youth depression and suicide.

Both theater troupes offer a “pay what you can” option for tickets, and Dormouse is committed to keeping all events at an affordable price.

Dormouse is also branching out into live music of all genres, engendering the kind of intimate, listening-room atmosphere that encourages audience engagement.

On July 23, Kalamazoo musician Darcy Wilkin will present the first in a monthly series called the “Darcy Wilkin Whatzit Hour,” which will feature Wilkin and a featured singer-songwriter in conversation about their creative process.

Wilkin says she chose the Dormouse after she caught a show there and was reminded of the coffeehouse shows her parents and their friends used to host when she was a kid.

“This town has some cool rooms to play in, but not enough of them,” she says. “I really wanted a place with a listening crowd, and the fact that it’s an old church and it’s set up for that … it’s just going to be perfect.”

Wilkins describes the event as “filled with a lot of music, more music than talking.” Her first guest will be singer-songwriter and renowned banjo player Joe Newberry of North Carolina.

Jarad Selner, a Kalamazoo musician and sound tech at the Dormouse, agrees that the space facilitates a rich experience for musicians, one where the music itself is the main focus.

“Dormouse is an art-forward performance space, which is refreshing compared to the majority of places most bands get to play,” says Selner. “You’re not competing with loud televisions or karaoke in the other room. People come to fully experience the art at hand.”

Whatever the offering, it’s important to Dupuie that the theater continue to reflect and embrace the neighborhood. Having lived in Edison since 2008, he recently became executive director of its neighborhood association and knows the area is experiencing something of a renaissance. But Dupuie is committed to “keeping it scrappy.”

“I don’t intend to replace the tables,” he says, laughing. “I’m not coming in here trying to polish all the knobs in this place. I’m trying to revitalize the building and present things in it that I feel are informed by this neighborhood. That’s how the Dormouse fits into the grander scheme of things.”

Jessi is a musician, educator and freelance writer who recently returned to Michigan after living in California for over a decade. 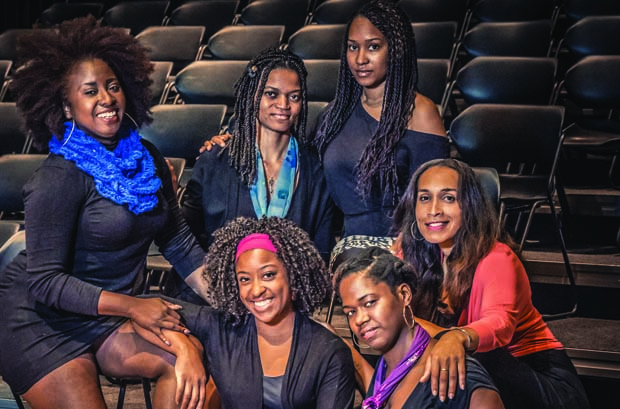