The Civic presents this August Wilson drama about family and the legacy of slavery that follows the conflict between Boy Willie, his sister Berniece and the family’s heirloom piano.

Set in 1936, Boy Willie arrives in Pittsburgh from the South in a battered truck loaded with watermelons to sell. He has an opportunity to buy some land down home, but he has to come up with the money right quick. He wants to sell an old piano that has been in his family for generations, but he shares ownership with his sister and it sits in her living room. She has already rejected several offers because the antique piano is covered with incredible carvings detailing the family’s rise from slavery. Boy Willie tries to persuade his stubborn sister that the past is past, but she is more formidable than he anticipated. 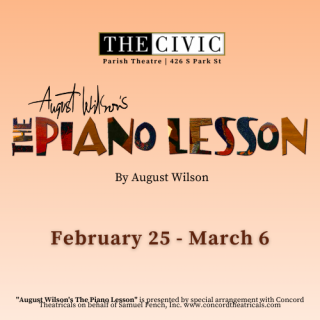