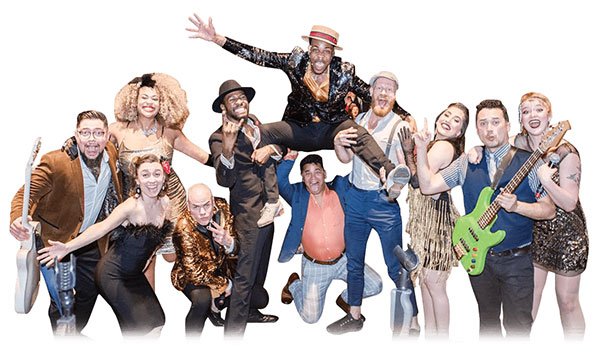 Something Musical
Southern Culture on the Skids to play Bell’s

If you like songs about dancing, sex and fried chicken, then you will want to be at Bell’s Eccentric Cafe Oct. 10 to see the roots-rock band Southern Culture on the Skids.
The band, which formed in 1983, has released 17 albums. The band’s guitarist and singer, Rick Miller, describes their music as “Americana from the wrong side of the tracks.” It has been featured in movies and on TV and has been used to sell everything from diamonds to pork sausage.
Show time is 8 p.m., and tickets are $16 and available online at bellsbeer.com.

All those things we associate with geekiness — robotics, comic books, technology, cosplay and more — will be celebrated at Geek Fest, set for 11 a.m.–3 p.m. Oct. 15 at the Kalamazoo County Expo Center.

For more information or to get tickets, visit facebook.com/SWMGeekFest.

What would Billie Eilish’s “Happier Than Ever” sound like as the title song of a ’60s-themed musical? Find out when Scott Bradlee’s Postmodern Jukebox: Life in the Past Lane concert tour comes to Miller Auditorium at 7 p.m. Oct. 12.

Postmodern Jukebox’s vocalists, instrumentalists and tap dancers take today’s hit songs and perform them in other musical genres of the 20th century. The group, formed in 2011, has played more than a thousand shows on six continents , including acclaimed venues like Radio City Music Hall, the Sydney

Opera House, and the Red Rocks Amphitheater.
Ticket are $48–$68 and available online at millerauditorium.com or at the auditorium’s box office.

Something Funny
Enjoy the wit of David Sedaris

David Sedaris, who’s been described as a champion storyteller by the Los Angeles Times, brings his sardonic wit and incisive social critique to the State Theatre at 8 p.m. Oct. 29.

Sedaris is the author of Barrel Fever and Holidays on Ice as well as collections of personal essays, including Naked, Me Talk Pretty One Day, and Let’s Explore Diabetes with Owls. Sedaris’ pieces appear regularly in The New Yorker and have twice been included in The Best American Essays.

Tickets are $40–$59 and available through kazoostate.com.

The contributions of Henrietta Lacks, whose cells led to major medical breakthroughs like the polio and Covid-19 vaccines and who was the focus of the 2010 book The Immortal Life of Henrietta Lacks, by Rebecca Skloot, are explored in a play and exhibition at the Kalamazoo Valley Museum.

In A HeLa Story: Mother of Modern Medicine, Lacks’ story is told through the lens of her great-nephew, Kalamazoo resident Jermaine Jackson, who has amassed a collection of related items, including artwork of Henrietta Lacks by Southwest Michigan artists, family photos, a timeline, articles, memorabilia, and photos of Lacks’ cells. The exhibition will be on display through Feb. 27.

The play, written by local playwright Buddy Hannah, gives a glimpse into Lacks’ personal life, including the unauthorized removal of her cells, as well as Jackson’s journey from initial boyhood skepticism to his adulthood awe of his aunt’s cells. Jackson’s grandmother, Bessie Lacks, of Kalamazoo, and Henrietta Lacks married brothers. Lacks, an African-American mother of five, died on Oct. 4, 1951, at age 31, from cervical cancer.

The play will be staged in the museum’s Mary Jane Stryker Theater at 7 p.m. Sept. 30 and 2 and 7 p.m. Oct. 1. Seating for the play will be limited and on a first-come first-served basis. Admission to the exhibit and play is free.