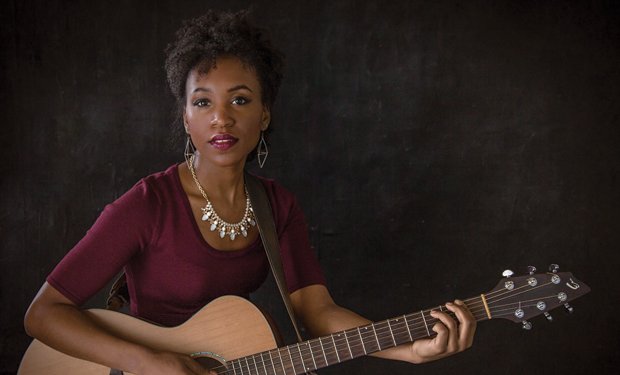 Despite growing up “in an environment where people were always singing,” singer and songwriter Nashon Holloway didn’t think she had the chops to get into the School of Music at Western Michigan University, so she majored in creative writing and philosophy there instead.

But friends pushed her to perform, and as a freshman she won the campus talent competition called “Western Idol.” Through the competition, she heard about WMU’s Gold Company, an internationally recognized vocal jazz ensemble made up of undergraduate and graduate students. The next year she tried out for the ensemble and got in.

Now, after playing in venues as diverse as dive bars in Kalamazoo and palaces in Dubai, 27-year-old Holloway has released her first CD, The Palace & The Hut, a full-length album of original music penned by her and her boyfriend, Bryan Blowers, a fellow WMU grad and a guitarist in her Nashon Holloway Band.

The album ranges from love songs to a song called “Say Goodbye,” which Holloway says is “a simple song about breaking up with fear,” a subject she knows well.

“I was pretty terrified of my potential or lack thereof in college,” she says, noting that she didn’t even check postings of who got into Gold Company because she was so sure her audition was weak. (“My teacher later confirmed it was pretty bad,” she says, laughing.)

Holloway, who graduated from Mattawan High School, credits Gold Company with showing her how to perform professionally, but her family is no stranger to the music industry. Her mother, Dorothea, a retired Kalamazoo Central High School history teacher, once turned down a record deal with Columbia Records (she was Dorothea Sudduth at the time). Nashon’s oldest brother, Jerome, is a recording artist in L.A. Her other brother, Jared, works in music production, and her older sister, Adrienne, is a banker who sings as a hobby.

“My family is out of control as far as talent is concerned,” says Holloway.

She says the story of her mother turning down a recording contract isn’t a big deal in her family. “We are such multi-faceted people that it’s hard to have something like that be bigger than our personalities,” she says.

Then she laughs. “I like the story because it’s cute that she was like Kalamazoo’s ‘songstress.’ As far as a legacy is concerned, I do something similar to what she did when she was my age. We bought Stevie Wonder’s album Songs in the Key of Life 40 years apart, but we listen to it and sing the same parts.”

After graduating from WMU in 2012, Holloway played music locally for a year. Then she visited her sister, Adrienne, who was living in Dubai and performing as a hobby. Holloway stayed for nine months, playing at Ritz-Carltons and Waldorf Astorias. She played on a beach during engagement ceremonies, at Mitsubishi and F1 Nascar events, and even at Taste of Dubai with her sister, all while writing her album in her bedroom during the day.

The Palace & The Hut takes its title from the Kahlil Gibran parable of the same name, about two very different experiences of wealth and satisfaction.

Gibran’s parable, which opens with rich people at a party who sleep fitfully after drunken revelry, follows one of the servants home from the party.

“This guy gets home after the sun’s down, and it’s a very warm home. It’s full of love,” Holloway says. “He gets up before the sun comes up, and he goes out to till the land. The wine that got those rich people drunk and was the source of their merriment: It was his sweat.”

Holloway says in Dubai she “literally was playing in palaces.” When she returned to Kalamazoo, she played venues where no one was listening to her at all.

“You go from a place where people are like, ‘Oh, you’re an American!’ and they are laying gold necklaces around your neck while you’re playing. And then at home the drunk guy gets on stage and is spitting in your face: ‘Play “Freebird!’ Or something.”

Sometimes, she says, she has those experiences back-to-back. The drunk guy might be yelling through her set one night, but then, say, it’s a Sunday morning and she’s playing at Old Dog Tavern with a child dancing right on the floor in front of her.

“Children don’t dance if it’s not good,” she says. “They cover their ears if it’s bad.”

When Holloway returned to Kalamazoo, she worked as a barista at Water Street Coffee Joint and continued playing music, including a show with Blowers at the Lansing JazzFest last August.

After writing most of the songs on her album by herself, Holloway then brought them to Blowers, who helped her clean up loose ends. She considers Blowers the musical director of the album and herself the creative director, and she values the improvisations of all the musicians in her band.

She says her band’s keyboardist, Rufus Ferguson “excels at doing things on accident. I love musicians like that, because they’re using intuition to feel their way through a song.”

She may be rooted to Kalamazoo, but in July, Holloway moved to Chicago, where Blowers and another bandmate, bassist Kellen Boersma, now reside. (Other members still located in Kalamazoo are drummers Keith Hall and Mike Porter, bassist Neal Conway and keyboardist Ferguson.)

Holloway also just took her first 9-to-5 job, at a fitness company that sells heart rate monitors. The move and the job were a big leap, and she admits she’s still getting her feet under her.

“I love improvising,” she says. “I think it’s one of the things that makes me, if I may say it, a fairly strong songwriter. I can feel a vibe and go with it, and I can connect, which is why I’m overwhelmed right now. I’m in such a foreign place in Chicago and doing all these foreign things. It’s weird for me to adjust.

“All these things are new. It’s like, how to keep the self? It was easier when I was a barista and playing music.”

Then she laughs and teases herself. “It’s only been a few months. I need to calm down.”

She may be on new ground, but Holloway is no neophyte. In 2010 she sang backup along with other Gold Company singers for Filipino recording artist Charice Pempengco on The Oprah Winfrey Show. Anyone who has the chance to describe Oprah’s fog machine — “That thing was hydrating! Some fog machines make you cough. Oprah’s was like being at the spa,” Holloway says — is probably going to be OK.

Besides, growing up the youngest in a family of musicians is practically a breeding ground for ingenuity. “There are a lot of successful people in my family, but no one is going to let you think that you have arrived,” Holloway says.

“It doesn’t matter what you do. You could be the president, you’re still gonna hear it from us.”

Check out her music at nashonholloway.com 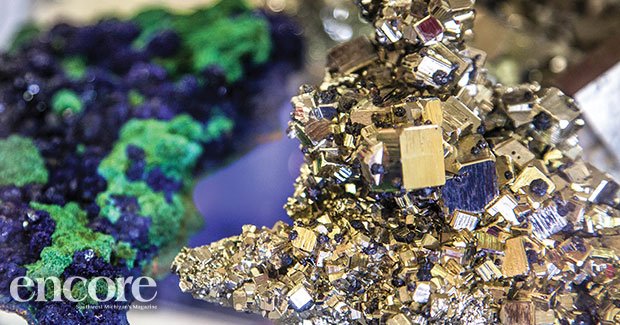