From Starving Artist to Mentor 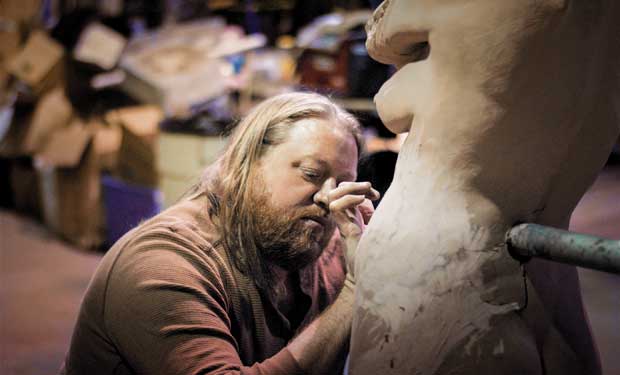 In an industrial area of Kalamazoo’s Eastside neighborhood sits a brick building with loading docks and steel doors. The original construction hints of the city’s industrial age, when such buildings created car parts or repaired heavy machinery. Now the space has half-sculpted rigid-foam sea turtles hanging from its ceiling, several Abraham Lincoln busts made of clay and a giant, concrete 9-foot-tall turn-of-the-century boot.

This is 43-year-old sculptor Joshua Diedrich’s studio, where he both creates new works and mentors art students in his apprenticeship programs.

Diedrich’s work is primarily as a draughtsman and modeling sculptor. He uses clay to create figures that are then cast in media such as metal and bronze. Diedrich has been interested in the human form and anatomy from an early age and says that he has been drawing naked people since he was 3 or 4 years old and growing up in Paw Paw. He trained in oil painting at the University of Michigan and often includes the medium in his drawings. In the last 10 years his interest in anatomy has developed into an appreciation of capturing animal forms.

Diedrich’s best-known work is likely “The Gathering Tree,” on Western Michigan University’s campus, near the Bernhard Center. It’s a three-dimensional version of the university’s crest, with a large, bronze tree rising skyward from the crest’s center. Diedrich came to WMU’s attention after he worked with Kalamazoo sculptor Kirk Newman in 2012 on the installation of a 10-piece sculpture, “Words of Humanity,” at the Sherman Lake YMCA’s Outdoor Center. Creating “The Gathering Tree” took more than 18 months. WMU officials initially wanted a small tree with a simple bronze seal, but, as the project evolved, the piece grew larger.

Diedrich earned a bachelor’s degree in sculpture and drawing in 1995 from the University of Michigan. He says he remembers fellow students asking one of the master sculptors at the university what they would do upon graduating. Diedrich recalled the artist’s response clearly: “He turned around and said, ‘You get a job at a f—ing restaurant. What do you think you do?’

“It was probably the most honest answer that I got from anybody,” Diedrich says.

Sure enough, after graduation, Diedrich embarked on a number of jobs to support himself, including freelancing in graphic design and selling prints of his drawings of nudes on what was then the emerging internet. Corporate gigs fell through, and Diedrich discovered that the internet, still in its infancy, wasn’t a good vehicle to sell work.

Diedrich laughs as he describes the harsher side of trying to make a living in the fine arts.

“Homeless, less than three months after graduating art school, living in a basement of an abandoned building,” he says.

He moved back into his mother’s Paw Paw home, took odd jobs, saved all the money he could and looked far and wide for work in the fine arts.

One day when he was leafing through a glossy art magazine, he saw ads for the art academies dotting Europe. He wrote to one — just one — of the schools, pitching himself as a teaching assistant for the coming term. No qualifications, no references.

A month later, Diedrich received a letter from the school saying he was hired. For the next three years, he lived and worked in France, shuttling back to the U.S. when he needed to earn enough money to afford living in metropolitan Paris.
When he returned to Southwest Michigan permanently, he once again found himself piecing together an income by working odd jobs: painting houses, doing general contract work, even working a stint at Toys R Us.

A studio of his own

In 2005, he got a break when the Kalamazoo Institute of Arts hired him as an instructor in its art school. Within three months, Diedrich was heading the school’s sculpture department. Diedrich, who worked at the KIA for four years, credits his time there for developing his teaching skills and allowing him to network with art students.

Several of his KIA students had inquired about the possibility of participating in a more intense sculpture program, so Diedrich left the KIA in 2008 and started his own teaching studio on the Eastside. He calls it The Figure Workshop: Drawing, Sculpture and Painting Atelier. There, he offers apprenticeships in sculpture and drawing as well as a figure drawing class and sessions for drawing a nude model. In his apprenticeship programs, students can take courses indefinitely. One student has been attending classes since 2008.

On a wintry day in February, several students pass through the steel door to Diedrich’s studio, hang their coats and set to work arranging their work spaces, against a backdrop of metallic hammering from the diesel repair shop next door.

Diedrich starts the day’s drawing lesson. His generous approach to teaching is evident when he hands his smartphone to a student and asks her to record video as he teaches the day’s lesson. The video is for another student, a retired architect living in Guatemala who takes the class online.

Diedrich’s Figure Workshop attracts a diverse group of students — some are just out of high school, others are medical doctors looking to branch out. Of the latter group, Diedrich says, “They have done corpse dissections but never really had to think about how does the shapes of a living body all fit together and how to recognize all the parts just by seeing the skin.”

Diedrich says he finds getting the word out about his classes to potential students has been difficult and that, as a result, many potential students don’t know a program like his exists. And if they do, he says, they might not think they have the talent for it. He encourages them to think again.

“Really,” he says, “all you have to do to be worthy of it is be diligent, to work hard and be willing to look at yourself a lot.”

Ellie Deleon, a student at The Figure Workshop, says she does just that. Deleon started taking classes with Diedrich at the KIA after a divorce led her to pursue art. At first making art seemed daunting to her, but she soon came to see the sessions as a form of therapy. She was persuaded by Diedrich to join his apprenticeship program in 2012 to work on more advanced artistic pursuits.

“When I started doing this, my whole life was turned upside down,” says Deleon. “When your identity is wrapped in being a mom and a wife for so long, you really don’t know who you are anymore.”

Deleon works in the mental health field, and she sees benefits with each class session. “I can really feel it when I haven’t gone for a week or two in my personal life and how I feel,” she says. In the last year, Deleon has become confident enough to post images of her work on social media sites like Facebook. Before that, it was more about the process of creating art than making something magnificent.

“I didn’t care that I wasn’t good at it,” she says. “I was never doing this for the end product.”

In his workshop, Diedrich strives to rewire his students’ thinking so that they open themselves to new ideas. That requires hard work and focus, he says. “It’s a difficult program, because we do a lot of really challenging things.”
But Diedrich is used to that.

Pay attention to the world around you — that’s Jay’s mantra. Always curious about people, places and ideas, he continually likes to try new things and meet new people. Before becoming a nontraditional student at WMU, Jay spent several years working as a musician, which allowed him to see many parts of the U.S. and the world. Jay graduated from WMU in April and will begin working on a graduate degree in communication at WMU this fall. 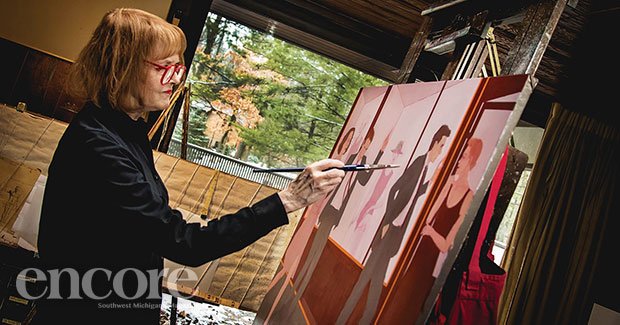