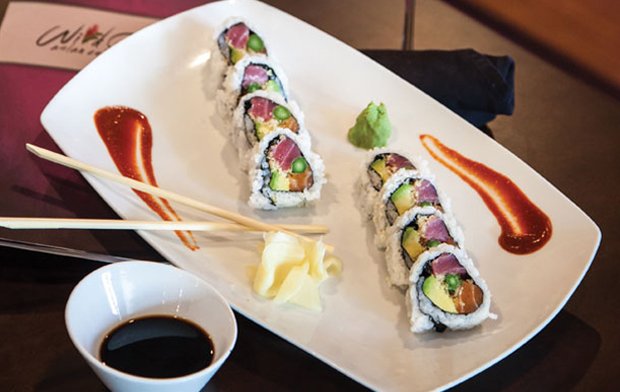 For those times when you’re craving both Italian and Japanese food but your dining companions want Chinese or a burger, Andrew Lum has you covered.

Lum is the force behind three Kalamazoo eateries — Spice n Rice, Buddha’s Belly and Wild Ginger — and knows variety is the spice of life. While Spice n Rice and Buddha’s Belly offer more traditional American-Asian cuisine with a smattering of sushi thrown in, its his Portage restaurant, Wild Ginger, that combines the tastes of various cultures.

“We have a teryaki burger on top of cucumber straws and topped with fresh pineapple cut very thin, for just a taste of pineapple, (and) our Philly cheesesteak eggroll is really popular,” says Lum.

In addition, Wild Ginger offers Japanese udon noodles with basil and tomatoes, like Italian spaghetti. At the restaurant, Lum also adds fried garlic to sushi rolls, a dish he says he hasn’t seen anywhere else.

Lum says all three restaurants tout Asian cuisine, with twists unique to each location and a few commonalities. “There aren’t that many Asian restaurants in the Kalamazoo area,” he says. “We try to be the most healthy — we use only breast meat and better ingredients.”

Lum, 36, grew up in Portage and spent a lot of time at his parents’ restaurant, Kowloon Palace (now closed), on Portage Road.

“When I was younger, I never wanted to be there. When I told my parents I wanted to open a restaurant, they said, ‘What?,’” says Lum. “I just wanted to offer something different.”

Lum’s first venture was Spice n Rice, which opened about 14 years ago (it is currently closed for construction but is expected to reopen by midsummer). Buddha’s Belly followed in 2011 and Wild Ginger in 2014. Lum and his father, Lee, co-own the three restaurants, while his mother, Lilly, sometimes makes crab Rangoon and other dishes by hand for diners.

Dining jargon would tag some of Lum’s dishes at Wild Ginger, in Portage, as “Asian fusion” because tastes and food from different cultures are blended into one dish. In addition, the restaurant serves 20 kinds of sushi.

If you’re not ready to experiment quite as much with your meal, Buddha’s Belly offers more traditional American-Asian cuisine, including pad Thai, lo mein, and General Tsao’s chicken, along with more than a dozen sushi rolls.

Spice n Rice offers takeout meals. Dozens of chicken, beef, vegetable and seafood combinations are available, including lighter, smaller chicken and shrimp “diet” meals. Lum has made an attempt at all three restaurants to cut back on MSG and other additives often found in takeout Chinese food. He says he likes to offer vegetarian and healthy options alongside his Asian fusion options.

While most dishes on the menus at Wild Ginger and the other restaurants sell well, most regular customers prefer familiar foods like sweet and sour chicken and fried rice, Lum says. Some diners are willing to experiment, though, and a few even ask him to recreate something they’ve seen on a trip to Asia. He does what he can with those requests, but not everything is a success.

“Chinese bitter melon nobody seems to enjoy,” Lum says. “I can’t find a palate for it.”

Even if the audience for Asian fusion restaurants is a little limited in Kalamazoo and Lum is not ready to open another restaurant yet — Spice n Rice needs to reopen first, he says — he still has ideas for new dining experiences. One is focused on breakfast foods. Another is a Mexican-Chinese mix, featuring burritos stuffed with Asian-style stir fry — “like Qdoba but with a Chinese flair,” Lum suggests.

His ultimate goal for his restaurants, he says, is to offer a little something for everyone.

Andrew Lum and his father own and operate three local Asian restaurants: