Get on the Bus! 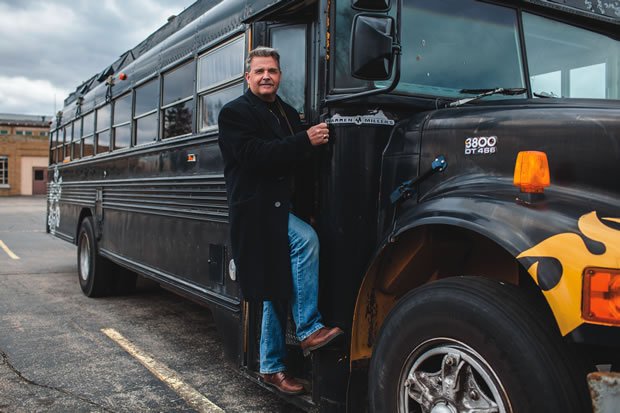 Dan Hill on the steps to Dan’s Ultra Party Bus. Opposite page, the interior of the bus features leather couches and TVs.
Bus gets third life as party-mobile

Dan’s Ultra Party Bus was famous in the world of skiing and snowboarding before Dan Hill bought it — it fishtailed through Timber Ridge Ski Resort’s parking lot in a memorable segment of the 2009 Warren Miller ski film Dynasty.

Miller had used the bus to transport winter athletes to various locations featured in the film and to house them as well. Hill, who owns the sports equipment company Action Sports Enterprises, had seen with the refashioned school bus in action when he worked as a medic at a ski and snowboard jump event at Timber Ridge Ski Area. Fast forward to 2013, when Hill was coordinating the first Snow Sailing World Cup event in St. Ignace and learned the bus was for sale. He bought it to use for the festivities, but after the event, Hill wasn’t quite sure what to do with it.

“The bus sat for a while after the event, but people kept asking me if they could see the bus or ride the bus, since it had been used in the film,” Hill says. “I had it just parked, but the guy who works on the bus for me kept saying the worst thing I could do was let the bus just sit — you’ve got to run those diesel buses.”

Hill started renting the bus out about two years ago for ski trips, to “kill two birds with one stone.” After a while the bus gained popularity for graduations, bachelor and bachelorette parties, pub crawls and more. Now the bus is the official bus of the Kalamazoo Growlers minor-league baseball team, is used by West Michigan Beer Tours and is kept busy for special events.

Originally the bus was renovated from an old yellow school bus for the film Dynasty by the athletes who used it. The outside was painted black, with yellow flames on the hood and large snowflakes on the back side panels. There’s also a Warren Miller insignia on the front, marking its use in the Dynasty film. Since the athletes in Dynasty traveled to and from events on the bus, it has a shower and sleeping quarters, Hill says.

The bus has been used in a couple of other films too, he says, but most people remember the bus making “doughnuts” in an icy parking lot in Dynasty.

The inside of the bus has plush, black-leather couches and chairs, a kitchenette and two flat-screen TVs. The TVs were added by Hill, as well as LED lighting. The bus can be divided into two areas and lights are strung all over for extra party effect.

“The bus has got some real character to it,” Hill says. “A lot of party buses have music and lights, but in this one you can walk around and it provides a space that other party buses don’t usually. You can have as much fun getting to the destination as at the destination itself — (you) can watch movies, sing karaoke, and I’ve got a popcorn machine.”

Although Hill has three other drivers who work events with him, he continues to drive for events too — something he doesn’t want to stop doing anytime soon.

“I like to drive because I like to meet the people coming on the bus,” he says. “I like to hear their comments, and I like to tell them the story behind the bus, too.“

“The bus has got some real character to it. A lot of party buses have music and lights, but in this one you can walk around and it provides a space that other party buses don’t usually. You can have as much fun getting to the destination as at the destination itself — (you) can watch movies, sing karaoke, and I’ve got a popcorn machine.”
— Dan Hill 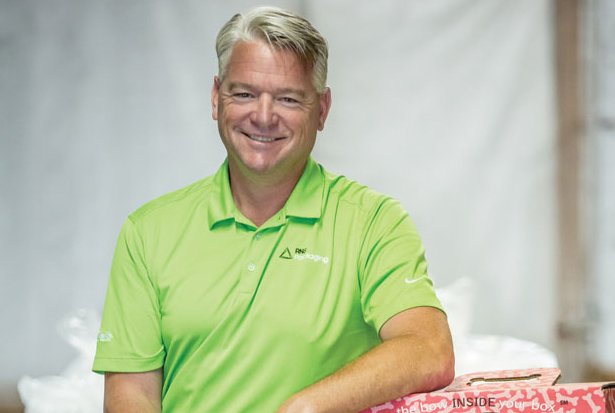 RNS Packaging has a better, safer way to protect packages