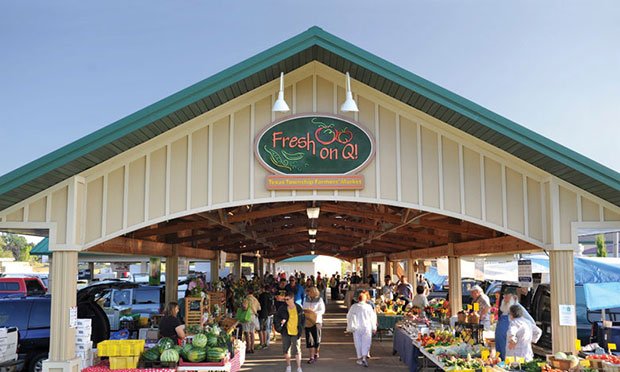 Good planning, good timing and a little serendipity go a long way toward promoting a community’s economic development, and the Fresh on Q Farmers’ Market, in Texas Township, has shown just how such development can happen.

Planning for the highly successful market goes back to 2007, when then-Supervisor Ron Commissaris, Clerk Linda Kerr and Planning Commissioner Larry Loeks attended a Citizen Planner course offered by Michigan State University. They wanted to develop a sense of community in the residential/agricultural township, which had grown to 15,000 people — a 20 percent increase over the previous 10 years.

Residents liked the rural character of the township’s lakes, vineyards and farms, but there was no place where people could gather as a community. Schools typically perform this function, but the township doesn’t have just one school district; it is part of four.

Meanwhile, then-township resident and local food advocate Donna McClurkan approached township officials about the potential for a farmers’ market in the township. Although the Kalamazoo Farmers’ Market, located on Bank Street near downtown Kalamazoo, had been around for more than 60 years and was well established, it was a bit of a drive for Texas Township residents.

“There was a gaping hole in meeting what seemed to be an untapped need from a geographical standpoint,” McClurkan says.

She was asked to lead a team of volunteers to plan a one-day trial run to determine the community’s interest in and the feasibility of a market.

The trial run was Saturday, Sept. 27, 2008. With only six weeks to prepare, McClurkan gathered 16 vendors to sell their products for an anticipated 200 to 300 people. More than 1,200 people showed up, and vendors sold out of goods in three hours. Township officials needed no further “proof of concept.” On May 22, 2010, the new Fresh on Q Farmers’ Market opened at its current location — vacant land next to the township’s offices.

The market has offered a twofold benefit for local residents. It provides a desired source of fresh produce and goods, and, because it’s situated at Texas Corners (the intersection of Eighth Street and Q Avenue), it serves as a “town square.”

“The Texas Township farmers’ market drew people together for one common activity that they love,” says Township Clerk Kerr. “They see their neighbors, have breakfast and shop at local vendors’ stalls.”

In 2013, nearly 3,000 shoppers came to the market each week to buy from 60 vendors, with 20 more vendors on a waiting list. In addition to benefiting shoppers, the market has made a difference in the township’s economy, especially for local farmers like Bill Schultz, 32, of Schultz Fruitridge Farms in Mattawan. “Farming is what we do,” Schultz says. “It’s our source of income.” Today, the 250-acre Schultz farm grows apples, cherries, peaches, grapes, plums, sweet corn, squash and asparagus and raises bison.

The farmers’ market provides farmers with a venue other than a storefront to sell their products. It has given farmers good public relations, greater relationships with customers and some increases in overall sales.

Local farmers have further benefited from the market by forming partnerships with local restaurants and grocery stores. For example, Food Dance restaurant buys produce from Blue Dog Greens and Eaters Guild of Bangor, Scobeys Farm of Wayland, and Young Earth

Business offshoots from the market, like The Cheese Lady, also have developed.

Natalie Fuller, 32, owner of the Cheese Lady franchise in Texas Corners, knew she wanted to own a small business, but after graduating from WMU in 2003 she didn’t know what type of business that might be. Her first job, at the Kellogg Co., was in food-service sales in Detroit, where she called on hospitals, hotels and universities. As she interacted with the chefs at these institutions, she saw “niche food” as a business opportunity.

Her father, Terry St. Louis, an insurance agent at the time, had started an online dining guide for southwestern Michigan as a hobby and discovered Kathleen Fagan Riegler, who owned The Cheese Lady in Muskegon. He suggested that Fuller check her out, which she did.

“I immediately fell in love with her concept,” Fuller says, “and asked her to be my mentor for a similar shop in Texas Township.”

The local Cheese Lady is a franchise of the Muskegon shop. Fuller learned how to acquire and package imported and domestic cheeses and then experimented with these processes through the Can-Do Kitchen at the People’s Food Co-Op in Kalamazoo. (State law requires that any cutting, wrapping, labeling and packing of food products take place in a licensed facility.)

Fuller also piloted her products at various area farmers’ markets, with the most interest coming from Texas Township. When space for a storefront became available across the street from the market, Fuller’s customers encouraged her to sell her cheeses there throughout the year.

Fuller opened The Cheese Lady at 7035 West Q Ave. on March 17, 2011, and it has been going strong ever since. Her father quit his insurance job and now works full time at the store with his other daughter, Kelly St. Louis, and on market days with his wife, Virginia Taylor.

“I’m very, very happy to be here in this community,” Fuller says. “It is an extremely supportive community, and people have embraced us as their store. They even bring their out-of-town family and friends here to show us off.”

Already-established businesses in the township also have benefited from the farmers’ market, through greater visibility. Chris Khoury, owner of Asiago’s Bakery and Deli, at 6997 West Q Ave., says that his business overall has doubled since the market’s opening and that business during the summer has increased by 33 percent.

Every Saturday, Khoury operates an “omelet cooking station” at the market, offering omelets, waffles and pastries. His catering business had used the station before and booked two or three events a year. Now he is booking six to eight events a year, and he expects to book more.

“Economic development occurs when a local area has a vision that is promoted by one or several individuals,” Khoury says. “People come together in a synergy. It takes some bright minds and the ability to market properly. Texas Township has done a good job with that.”

It took only a year for township officials to see these upside effects of the market, spurring them to build a $210,000 permanent structure to house the market. Weather made it difficult to use the festive white tents that originally covered the vendors’ stalls. Wind blew down the tents, and rain made the parking lot and tented areas a muddy mess. Bids were solicited for design and construction of an open-air pavilion, and Steve Bosch, a local designer from Bosch Architects, and DeLoof Construction, a local builder, won the contract. The market’s new pavilion has won several awards, including the National Frame Building Association’s Building of the Year Award in the Judges Award/Commercial Unique Award category.

The pavilion has a life beyond the market as well. It has been used for other events like graduation parties, craft shows, Christmas tree sales and holiday celebrations.

In addition to Saturdays, the market is open on Tuesday evenings, but it is a more subdued environment than the crowded hustle and bustle of Market Saturdays, when there are more stalls with prepared foods, and people eat meals at picnic tables or bring them home. Market manager Emily Beutel reports that 750 people regularly show up on Saturdays, and families use the “town square as a Saturday family outing where they spend two to three hours.”

Admittedly, parking at the market can be a problem on Saturdays, but many businesses surrounding the market allow shoppers access to their parking lots because they see the positive impacts the market is making on everyone, Beutel says.

In 2010, the township received a grant from the Michigan Department of Natural Resources to build a pocket park adjacent to the pavilion, with playground equipment, a restroom, a half-mile sidewalk trail and a drainage system. Plans are in the works to connect the biking and walking trail with trails in Portage and Kalamazoo.

New use for old church

The latest and most exciting business development for Texas Corners is the conversion of the old, vacant church into a cidreie and brewery called The Texas Corners Brewing Co., a project of the Schultz family farm. A cidreie (pronounced cider-RE) offers hard cider made from fermented fruit juices. Schultz saw a few cidreies in operation during his travels to Europe a couple years ago and realized his fruit farm could add another income source to the family farm and another business to the community.

“The cidreie/brewery is a local craft that may be considered an extension of local food,” Schultz says.

The cidreie, which is tentatively set to open next month, will feature a “community table” where patrons sit on long tables located in the center of the room and interact with other families and groups. The new establishment also will sport a beer garden and a full kitchen menu. The taphouse will feature nine beers, two wines, three types of cider and a bevy of soft drinks.

“Who would have thought that someone would buy the church and what would happen to it?” asks Kerr. “It is another draw to the Corners.”

Because state law requires that cottage industries grow some ingredients on the farm, Schultz plans to grow barley, hops or rye on his farm. As breweries gain popularity in Kalamazoo (and in Michigan in general), other area farmers are already talking about planting barley, hops or rye for making beer, Schultz says.

Meanwhile, other business development at the Corners includes a new dentist’s office and an expanding animal hospital.

Because of the informal nature of farmers’ markets, it is difficult to nail down economic-impact numbers, but a voluntary survey of vendors taken by the market, in which only 35 percent participated, revealed that the 2013 market reaped $500,000 in sales, with each shopper spending $30 per visit, Beutel says.

“And, that’s a conservative estimate,” she says. 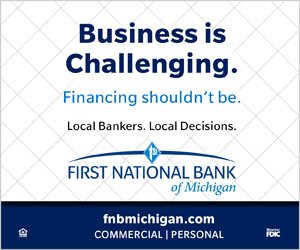 The Market’s Economic and Social Impact

The Fresh on Q Texas Township Farmers Market has offered a twofold benefit for local residents. It provides a desired source of fresh produce and goods, and, because it’s situated at Texas Corners (the intersection of Eighth Street and Q Avenue), it serves as a “town square.”

“The Texas Township farmers’ market drew people together for one common activity that they love,” says Township Clerk Linda Kerr. “They see their neighbors, have breakfast and shop at local vendors’ stalls.”

Because of the informal nature of farmers’ markets, it is difficult to nail down economic-impact numbers, but a voluntary survey of Fresh on Q Farmers’ Market vendors taken by the market, in which only 35 percent participated, revealed that the 2013 market reaped $500,000 in sales, with each shopper spending $30 per visit. 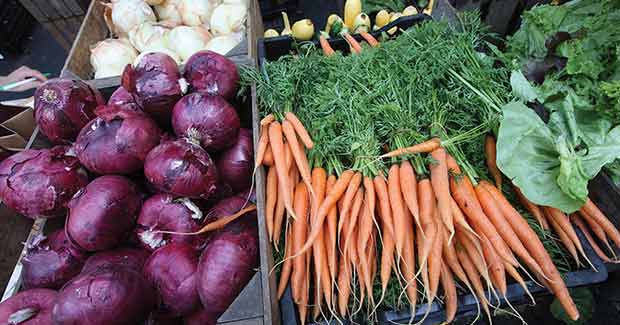 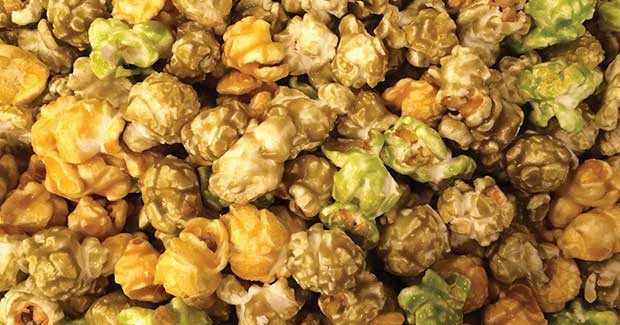