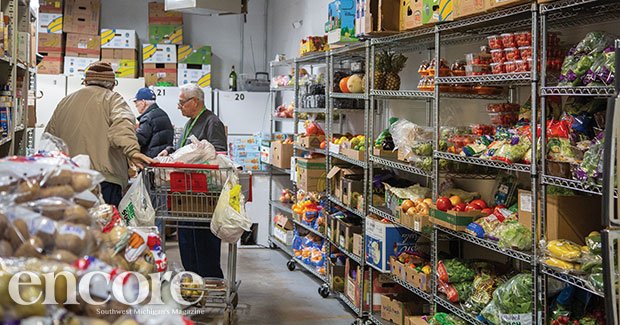 A large number of volunteers and a high volume of donations — those were two of the needs Joann Wespinter and 50 other members of what was then the Lake Center Bible Church faced when they brainstormed an idea for a new sort of food pantry in 2013. Wespinter had doubts about whether they could make it happen.

“I thought, ‘This will never work … but I’m curious,’” admits Wespinter, whose inquisitiveness pushed her to help launch Twelve Baskets, in Portage. She is secretary of the board at the nonprofit, whose name is a reference to the biblical story in which 12 baskets of broken pieces of bread were left after Jesus fed five thousand people with five loaves and two fish.

With a mission to fight against hunger in the community by bridging the gap between need and excess while restoring hope, dignity and self-respect, Twelve Baskets now serves approximately 100 families per week from Vicksburg, Portage, Schoolcraft and Three Rivers.

Twelve Baskets, located at 10332 Portage Road, differs from other food pantries in a variety of ways, Wespinter says. Clients find a grocery-store-like setting with stocked shelves, refrigerators and freezers, and healthy options such as meat and fresh produce rather than processed meals like Hamburger Helper. There are even parking attendants and shopping assistants who can answer questions. And while many pantries require proof of income and a birth certificate, Twelve Baskets’ clients need to show only a Michigan driver’s license or identification card, Wespinter says.

“We decided that they’re already feeling insecure or inadequate and embarrassed,” she says, “and we don’t want to do anything to make them feel that way.”

From backpacks to baskets

The idea of developing a food pantry came about as a result of Lake Center Bible Church’s program providing backpacks with food to some students at Lake Center Elementary School. “We thought if the children were hungry, then the parents must be too,” Wespinter explains.
An electrician in the group discussing the possibility of a food pantry offered firsthand insight: He had received food from a food pantry, and he said that most of the time it was food that his family didn’t even want to eat.

“That hit all of us kind of hard,” Wespinter admits. “And we said, ‘OK, now what can we do different?’ That’s when we came up with the idea of getting shelves, putting food on the shelves, getting shopping carts, (having clients) going up and down the aisles and letting them pick their food based on the size of their family.”

The organizers also wanted to provide healthy food to clients and ingredients to make a “decent meal.”

“That doesn’t mean that we won’t take it (boxed food) if it comes, but we want all the other things that they can do something with,” Wespinter explains. “They can actually make a decent meal. That’s what we came up with, again not knowing if we could pull it off.”

But things swiftly fell into place. Twelve Baskets became an independent nonprofit organization in 2014. By April of that year, it secured a building on Portage Road. After that, the group asked for donations. The community responded — overwhelmingly. Twelve Baskets received blinds, paint, carpet, furniture, shelves and professional expertise.

“Because there were so many people at that first meeting, we had a guy that was good at plumbing,” Wespinter says. “We had one that was good in electrical (and) one that knew people who (owned) a carpet company.”

Individuals and families also donate. “We have one family that has committed to spending $200 a month on things to bring to the pantry,” Wespinter says. “They always bring the kids.”

Receiving healthy food resonates with Twelve Baskets’ clients. “Some pantries don’t give the variety that Twelve Baskets gives, and for the first time we are able to eat fresh produce on a regular basis,” says a client named Jane.

To keep Twelve Baskets operating, 40 to 50 people volunteer every week, filling a variety of positions.

“We’re always going someplace picking up food,” Wespinter says, “and we’re doing it almost every day of the week and sometimes two or three times in a day.”

Drivers pick up donations throughout the region, including in Hamilton, Allegan, Wayland, Scotts, Three Rivers and White Pigeon. When the drivers arrive at Twelve Baskets, the items must be weighed and categorized, and perishable food items must be stored in refrigerators and freezers.

“In the meantime, shelves are getting cleaned, floors are getting swept and stock is being rotated,” Wespinter says.

On distribution day, volunteers assist clients with picking out foods based on the size of their family and educating them about foods they aren’t familiar with — like something out of the “fun fridge,” which has cheeses or premade salads with unfamiliar names. People who don’t have much money haven’t tried these kinds of items in the past, Wespinter says, due to their high cost.

Wespinter witnesses how Twelve Baskets impacts clients’ lives every day. For instance, the pantry had a client with four children who worked three part-time jobs and still couldn’t make ends meet, she says. The man came to Twelve Baskets for three years. One day last January he arrived with good news: He had two full-time job offers and wouldn’t need to get groceries at Twelve Baskets anymore.

After further discussion, though, Wespinter discovered he had credit-card debts. She suggested he continue to come to Twelve Baskets for food and use the extra money to pay off his credit cards. Every time he arrived for groceries, he gave Wespinter an update on becoming debt-free. “After three months I just didn’t see him anymore,” she says.

At the same time, Twelve Baskets is changing volunteers’ lives. Wespinter is the first to tell people that volunteering with Twelve Baskets has changed her life, “because things aren’t always as they appear.” It increased her compassion for and understanding of people. “I just see people different now,” she says. “I don’t look at somebody and make an assumption — no matter what. There’s times when life is really rough on people.”

Volunteers routinely recruit family members. One volunteer brings his teenage grandkids, and they have embraced the volunteer work wholeheartedly.

“The 13-year-old knows so much about what’s going on around here,” Wespinter says. “You could just turn him loose and he could run it, I swear.”

The organization’s warm embrace of clients has led many clients, such as Carolyn, to become volunteers themselves.. “At first I was very uncomfortable asking for help,” she says, “but the people at the pantry have made me realize that it is OK.”

Twelve Baskets has already outgrown its 2,800-square-foot building where, in the first six months of 2019, it served 8,245 individuals, including 2,620 children, 1,474 seniors and 4,151 other adults. Besides the refrigerated cases that run along one wall, the pantry has a 28-foot-long walk-in refrigerator and a 20-foot-long walk-in freezer outside the building. The organization recently acquired the outside freezer, which allowed for removal of many indoor freezers.

The nonprofit wants to purchase and renovate the 10,300-square-foot building next door, so the board is working on a fundraising plan to raise $500,000.

“We’re working on all the details to actually get a campaign out there and get it announced to the public,” she says.

“Some pantries don’t give the variety that Twelve Baskets gives, and for the first time we are able to eat fresh produce on a regular basis.” 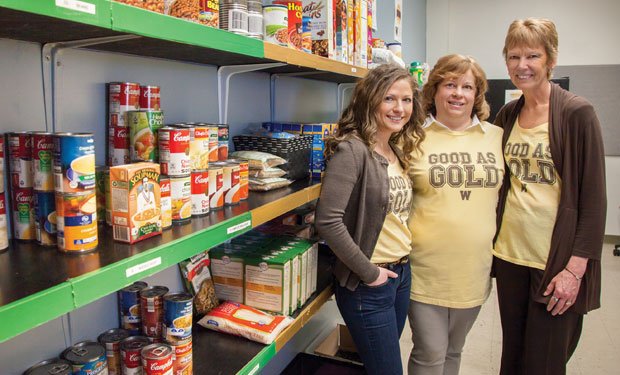