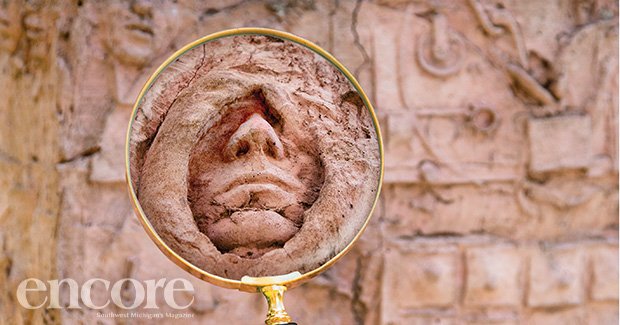 Among other things, a face or two can be found in the sculpture. © 2021 Encore Publications/Brian Powers
Unique & unusual local wonders right under your nose

You may pass by them every day and overlook them. You may stumble upon one accidentally and wonder, “What is this place?” Or you may not know about them at all.
Southwest Michigan abounds with unique and interesting sights that residents of the area often forget about or have never known were there. Here we highlight several places and things right in our backyard that we believe are worth a closer look.

Along the Kalamazoo River Valley Trail, just east of Mayors’ Riverfront Park, a short spur trail leads up to a secluded stand of trees and brush encircling four tall cement pillars. Informally given the moniker “Kalamazoo’s Stonehenge,” the pillars are intricately adorned with impressions of objects in bas-relief — some clearly symbolic of the area, such as a Checker cab, a stalk of celery and a beer bottle; others not so much, like the cartoonish head of former U.S. President Richard M. Nixon.

In 2019, WMUK reporter Sehvilla Mann set out to find out the history of this forgotten sculpture and discovered that it was created by Kalamazoo artist Mitchell Wilcox, with contributions from another local artist, Ladislav Hanka Jr., and has been there for more than two decades. It’s actually titled The Circular Ruin, and Mitchell told Mann that each pillar represents a different era in Kalamazoo’s history. You can find out more of the story behind the piece at wmuk.org/post/whys-kalamazoos-forgotten-stonehenge.

These Sites Are Au Naturel

It’s not easy to find a nature preserve in the middle of a city, but the greater Kalamazoo area is a paradox. The area offers a number of such places nestled in the midst of neighborhoods and commercial corridors. And while the grassy prairie of the Asylum Lake Preserve is easily seen as one drives down stretches of South Drake Road or Parkview Avenue, here are a few other preserves you need to look a little harder to find:

The 140-acre Lillian Anderson Arboretum, located at 7787 W. Main St., is on the south side of M-43 just past Oshtemo Township Park. Owned by Kalamazoo College, its marsh, meadow and pine and deciduous forests are used by the college for research, but the arboretum is open free to the public from dawn to dusk. Its 2.2-mile trail is an easy loop that offers lake views and abundant bird watching. Find trail maps and more information at arboretum.kzoo.edu.

With its 250 acres, Bishop’s Bog is a holdover from the last Ice Age and is believed to be the largest relict bog in Michigan, meaning one that has survived from an earlier era. Registered with the Nature Conservancy, the bog is home to several rare plant species, including the orange fringed orchid and the stemless pink ladyslipper. Bishop’s Bog is accessible from five city parks and preserves in Portage — West Lake Nature Preserve, South Westnedge Park, Schrier Park, the Eliason Nature Preserve and Bishop’s Bog Preserve — and is the centerpiece of the Portage South-Central Greenway, a six-mile pathway that links the five parks and preserves. Much of the Bishop’s Bog Preserve’s 1.2-mile trail is floating, taking the wanderer through marshes and wetlands. Be forewarned, though: With the higher water levels the area has experienced the last few years, the floating walkway tends to “squirt” water up through its holes, giving users either an unwelcome surprise or a refreshing spritz, depending on their perspective.

Tucked neatly into the heart of Kalamazoo’s Winchell, Hillcrest and Westnedge Hill neighborhoods is Kleinstuck Preserve, a 48-acre nature preserve owned and managed by Western Michigan University. This unique ecosystem includes upland forest, swamp forest, shrub carr and marshland and is home to a variety of plants and animals. A favorite spot among local birdwatchers, the property is open to the public and is used by WMU and other institutions for research and education. The preserve and its 1.2-mile loop trail are accessible from Chevy Chase Boulevard (where there are several parking spaces), Stearns Avenue, Hudson Avenue or a trail that runs behind the tennis courts at the YMCA of Greater Kalamazoo. The conservation group Stewards of Kleinstuck recently purchased an adjacent 12 acres to add to the preserve.

Can You Dig It?

Every summer an active archaeological dig occurs on the banks of the St. Joseph River in Niles that people can view and even participate in. The Fort St. Joseph Archaeological Project is unearthing Fort St. Joseph, which was established as a mission in the 1680s by French Jesuits and was one of the earliest European settlements in the western Great Lakes region. The fort became a garrison and trading post, and for almost 80 years French priests, enlisted men and traders lived there. Excavation of the site began in 1998 as a collaboration of WMU archaeologists, Support the Fort Inc. and the city of Niles. Each summer WMU students participate in a field camp excavation at the site, which also hosts summer camps for elementary through high-school-age students.

On Aug. 7 and 8 the project will host its annual open house, which will include speakers, reenactors and archeologists at work. The public can also attend the project’s summer lecture series, the details of which were still being worked out at press time. Because of Covid-19, there may be restrictions in place for attendance at these events, so be sure to visit wmich.edu/fortstjoseph for up-to-date information.

More than 150 years ago, several small communities in Cass County were pivotal elements of the Underground Railroad, helping nearly 2,000 escaped slaves from the American South find freedom as they passed through Michigan on the secret network’s Quaker and Illinois “lines.”

In an effort to bring that history to light, the Underground Railroad Society of Cass County has created a self-guided driving tour of 20 Underground Railroad sites in and around Vandalia. The tour includes such sites as the restored home and carriage house of Underground Railroad station master James E. Bonine; the Chain Lake Baptist Church in Cassopolis, founded in 1838 and one of the oldest African-American churches in Michigan and the birthplace of the area’s Anti-Slavery Society; and the Cass County Courthouse, where abolitionists turned back slave catchers who had stormed local Quaker farms to retrieve runaways during the 1847 Kentucky Raid. A printable map is available at urscc.org; maps are also available at the Underground Railroad historical marker in Milo Barnes Park, on M-60 in Vandalia.

Vandalia also hosts the annual Underground Railroad Days on the second weekend of July (July 9-11 this year). This three-day festival celebrates the region’s role in the abolitionist movement. In the past the festival has included guided tours of several historic sites; a soul food dinner; a living-history portrayal of Michigan’s 102nd United States Colored Troops regiment, which served in the Civil War; plus music and vendors. Due to Covid-19, the 2020 festival was cancelled, but at press time organizers of the Underground Railroad Days expected it to be held this year. For more information, visit villageofvandaliami.com.

Kayaking or canoeing the Kalamazoo River from Comstock to Cooper Township is scenic, but in more ways than you might think. It’s an interesting way to see — and hear — some less-seen industrial aspects of the area as well as its natural beauty.

Depending on your skill and comfort level, you can begin the roughly 10-mile trip at one of two currently open launch sites in or near Comstock. The Department of Natural Resources Comstock Township Access, about a mile east of the intersection of M-96 and Business Route 94 and less than a half-mile west of River Street, offers gentle put-in waters. More-experienced paddlers will find the current a little faster upstream at the launch site at Merrill Park, located at the corner of Comstock Avenue and River Street.

This stretch of the river offers glimpses of the Kalamazoo area’s industrial side and its past industry, including the former site of the Georgia Pacific paper manufacturing complex, which is now vacant land, Kalamazoo Metal Recyclers’ active scrapyard and the Grand Elk Railroad yard. The river will also take you past Mayors’ Riverfront Park and Red Arrow Golf Course, under East Michigan Avenue and past the former Arcadia Brewing Co. facility. You’ll continue through Kalamazoo’s Northside area, past the Graphic Packaging paper mill, which is currently undergoing a massive expansion that is visible from the river. Once you pass under Mosel Avenue, through Parchment and into Cooper Township, the scenery becomes more natural and wooded as the river runs alongside the Kalamazoo Nature Center. The D Avenue launch is private, and there is a small fee to take out there.

More information about paddling the Kalamazoo River can be found at kalamazooriver.org or michiganwatertrails.org.

Even though the Frisbee was invented after renowned scientist Alfred Einstein died in 1955, he can still be seen throwing one on WMU’s Parkview Campus.

A welded steel sculpture titled Between Theorems depicts a golden, bedraggled Einstein having fun with a flying disc. The sculpture was created by Montana artist Jim Dolan and entered in 2012’s Art Prize competition in Grand Rapids. It was there that John A. Kapenga, WMU associate professor of computer science, and his wife, Karen Woodin, saw it and purchased it with the intention of putting it in their yard. Instead, they had it installed near the main entrance to WMU’s College of Engineering and Applied Sciences, where it has become a mascot of sorts for WMU’s High Performance Computational Science Laboratory.

Go Back in Time

By driving 15 miles south from Kalamazoo you can take a trip back in time at the Vicksburg Historical Village & Depot Museum, at 300 N. Richardson St. What began in 1990 as The Depot Museum, housing artifacts and documents of Vicksburg’s history, has grown to include nine additional buildings displaying artifacts that reflect the rural community from the 1890s to 1932. Visitors can see a train caboose and boxcar, a cemetery, a farmstead, a gazebo, a newspaper office and print shop, a Railway Express Agency shipping office, Strong School, a former township hall, a village garage, and a general store and sweet shop. Volunteers from the Vicksburg Historical Society are available to answer questions about Vicksburg area history. The village is open 11 a.m.-3 p.m. Friday and Saturday. For more information, visit vicksburghistory.org.

After you check out the village, go on a scavenger hunt of sorts by following the Vicksburg Quilt Trail. The trail is 45 miles long and features 24 8-by-8-foot quilt blocks placed on the sides of buildings throughout Vicksburg and at many area farms. It takes about two hours by car to see all the quilts. To get a map and more information, visit vicksburghistory.org/quilt-trail. The trail also has a Facebook page at facebook.com/VicksburgQuiltTrail.

If you’d rather get some exercise while seeking out some of the quilt blocks, Bike Friendly Kalamazoo’s annual Fall Bike Tour, with at least seven routes of various lengths, will include glimpses of the Quilt Trail. The Sept. 19 tour starts and ends on the grounds of Vicksburg’s Historic Village. For more information on the bike tour, visit fallbikecelebration.org. 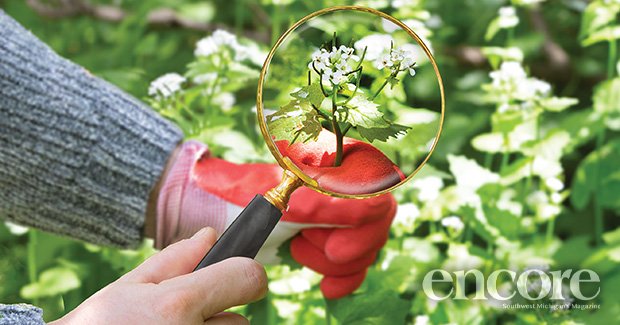