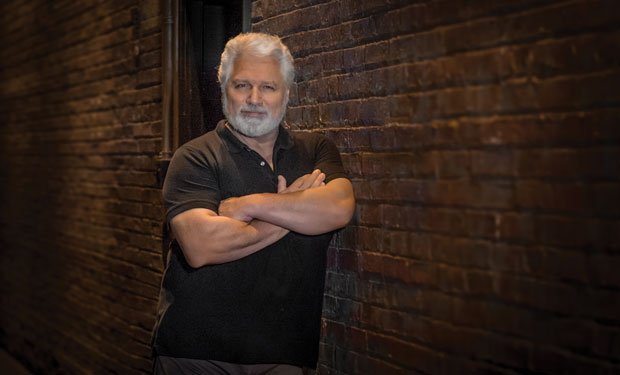 The Kalamazoo Civic Theatre looks the same as it did almost 90 years ago and has the same purpose and quality of product too. And now it has a familiar name at the helm. Again.

Stephen Carver took on the role of executive director last spring, following in the footsteps of his father, James C. Carver, who ran the theater for 38 years, and his grandparents Norman and Louise Carver, who were among the founders of the Civic Players.

Carver took over the job from Kristen Chesak, who is now the executive director of the Arts Council of Greater Kalamazoo.

The 55-year-old Carver has trod this stage before. He grew up on the “back bench” of the historic theater and learned the “family business” from his father, until he decided to be an actor in his own right.

After Carver earned a degree in fine arts and theater from Denison University, in Granville, Ohio, in 1983, he went to Hollywood. Among his many credits are appearances on television and in movies, including as a borg in seven episodes of Star Trek: Next Generation, as a policeman in Liar Liar with Jim Carrey, and roles in The Golden Girls, Diagnosis Murder and Ellen.

Carver has also directed 30 plays, worked in radio and television production and co-founded with actor and comedian Steve Carell the Skyline Theatre Company in Chicago. Carver also served as the company’s artistic director. For the past 12 years, Carver led the Longmont Theatre Company, in Longmont, Colorado.

So why would he choose community theater in a small southwestern Michigan town far away from the Hollywood limelight?

Quite frankly, Carver says, he found Hollywood to be an endless routine of auditioning for a role, playing it and moving on to the next gig. Community theater requires more of an ongoing commitment, he says. It involves five weeks of rehearsal and creative work before a show opens, three to four weeks of running the show and a continuous commitment to actors, volunteers, donors and patrons throughout the year, he says.

“For me, community theater was a better choice,” Carver says. “My contribution to the Civic is focused on creating a sense of community within our organization and its outreach to Kalamazoo.”

As the Civic’s executive director, Carver oversees 36 staff members and 1,085 volunteers, a total that is equivalent to 80 full-time employees. These volunteers include not only actors but ushers, ticket takers, costumers, painters and electrical workers as well as backstage crews that run sound or lights or manage props for each show.

The Civic also runs an Academy of Theatre Arts, which provides theater classes and workshops for all ages. Its Civic Youth Theatre trains youngsters from age 9 to high school seniors in all aspects of theater production.

What is most remarkable about the Civic, says Carver, is that actors, crew and professional staff all regard it as a home where they feel a real sense of belonging.

“It’s a place where the community learns the craft of live theater, but it also provides them with an opportunity to build self-esteem and interpersonal skills,” says Carver.

The Civic certainly feels like home to Carver. He notes that things around the theater haven’t changed much since he was a boy. The marble floors are still there, as is the furniture, which will soon receive an upholstering update. The stage is still Broadway-style, with a complete fly system and numerous trapdoors. The murals in the green room are the same. So are the dressing rooms, but the lights are now LEDs.

“The Civic has done a wonderful job keeping the look and feel of the original building,” says Carver. “As technology changes, the Civic has gone the extra mile to disguise the modernization. Even though we are a state-of-the art theater, it still feels like the auditorium of the early 1930s.”

In the theater’s basement is a kitchen stocked with china and silverware purchased from the Gilmore Brothers Department Store back when Carver’s grandparents managed the theater. The original stove is still there, but Carver plans to replace it so that home-cooked meals on real plates can be prepared for cast and crew during productions, just as they were long ago by volunteer cooks — and co-founder Howard Chenery himself.

“That just makes it special,” says Carver. “It’s part of treating everyone like family, which is a longtime tradition at the Civic.”

The theater was started in 1929, and its first home was the auditorium of the former Lincoln Junior High School (now Lincoln International Studies School). In 1929, Dr. W.E. Upjohn bought the house on the theater’s current site and helped build the Civic with Howard Chenery, who was the drama coach at Kalamazoo Central High School.

Right from the start, the Civic involved a community effort. Among the theater’s founders, in addition to Upjohn, Chenery, and Norman and Louise Carver, were Dorothy U. Dalton; Arthur Kohl and Frances Hall Kohl, who were former members of the Wright Players Stock Company; and Dr. Allan Hoben, then-president of Kalamazoo College. Their contributions helped to set the stage for many years of high artistic quality and performance at the Civic, which made it a major cultural institution in Southwest Michigan, and it is still one of the premier community theaters in America, Stephen Carver says.

Norman Carver was hired to oversee the building. He later became the Civic’s first business manager. And so intent was Upjohn’s resolve that the “happy use of leisure time, to adult education, to cultural life, and to the widest civic use” be the mission of the Civic, that he secured the life of the building in perpetuity by creating an endowment.

“The legacy of the theater is very, very important to me,” says Stephen Carver. “My generation is probably the last of those who knew the founders directly, and it’s important for us to tell the story of the Civic.”

Among those stories is that Upjohn’s ulterior motive behind founding the theater was that he wanted his daughter, Dorothy U. Dalton, to return home from New York City, where she was a stage actress.

“I don’t know if it’s true or not,” says Carver, “but it makes for a nice story and a legacy that has lasted almost 90 years.”

Carver relates another story about a Carver family Thanksgiving dinner, when Irving S. Gilmore, one of the theater’s generous benefactors, brought oysters.

“What this story symbolizes is that the early founders were very connected to each other like a family,” says Carver. “They had holiday dinners together, socialized, took theater trips, and vacationed together. They also continued to serve the Civic throughout the rest of their lives.”

However, many people may still ask the question: Why Stephen Carver and why now, after he’s been away for 35 years?

Former Civic Theatre board president Rob Kerschbaum provides the official answer: “Every part of Steve’s resumé spoke to the complex and unique demands of producing quality community theater. He combines management experience with fundraising and technical skills that will bring out the best in our staff and volunteers. But what made the decision so easy to hire him was his passion for the true spirit of community theater.”

Carver’s own response is more personal: “For me, the business of community theater is a family business,” says Carver. “It’s what we talked about since I was 6 years old. It was here that I appeared on stage and learned how to direct and act as well as to do staging, lighting, set design and recruit volunteer pools. This was my education.”

Growing up, Carver attended every Civic performance and then, on the ride home with his father, would engage in a critical analysis of the show by talking about what he liked and didn’t like. But the “back bencher” also mowed the theater’s lawn, buffed its marble floors, painted its windows, changed its marquee and did some of its maintenance work.

Carver’s father also taught him the importance of being personable at the theater, whether during a curtain speech at the beginning of a show or standing in the lobby talking to patrons as they arrived and left and during intermission. This is what it takes to run a successful community theater, he says, to literally be present to the community.

“We do a lot to make our house your theater home,” says Carver. “We want patrons to feel like they belong here. And if you’re a member, we work to make sure that you get a high-quality product on stage.”

Carver says the theater’s professional staff members greet patrons, donors, volunteers and visitors with enthusiasm, whether it is during office hours or before or after a performance.

“They’ve bought into the theory, too, that the Civic is all about being together as a family, as a community,” says Carver. “And paid staff realize they are here for our many volunteers in order to provide a level of service to them so that they, too, can see the Civic as ‘home.’”

For Carver, returning to the Civic is a way to give back to a profession and a place that have given him so much.

“Theater was good for me personally,” he says. “I gained confidence, self-esteem and learned how to present myself, which came in handy when I had to pitch myself in Hollywood.

“What better way to spend my career than by paying forward all the education in the arts I received at the Civic?”

“For me, the business of community theater is a family business. It’s what we talked about since I was 6 years old. It was here that I appeared on stage and learned how to direct and act as well as to do staging, lighting, set design and recruit volunteer pools. This was my education.”
— Stephen Carver, executive director of the Kalamazoo Civic Theatre 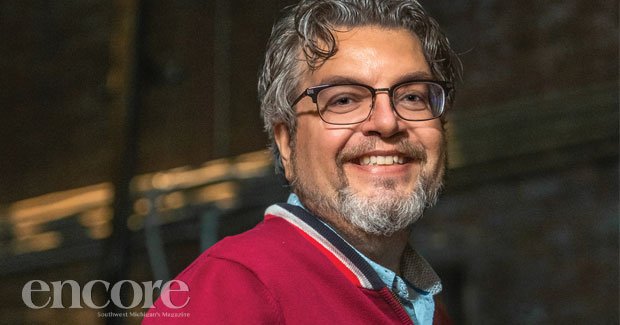 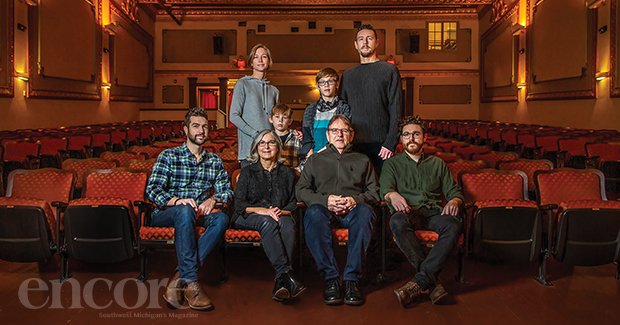 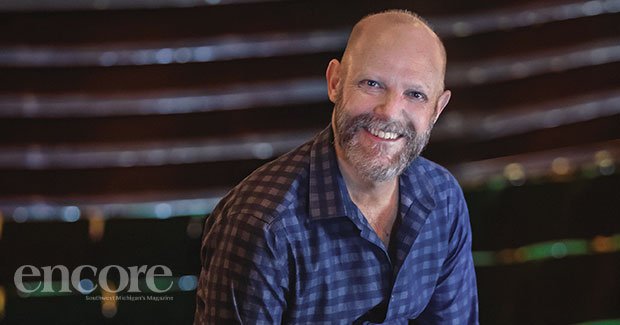