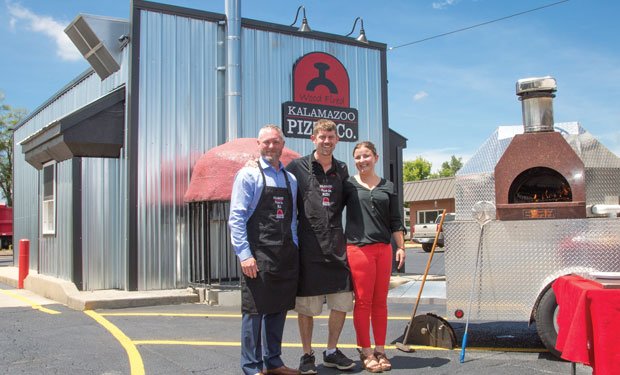 The idea for this business came from a history lesson. “Pizza sellers in Italy used to go around in wagons and sell pizza that way with horses and buggies and around castles,” Paul says. “I did research on it, and that’s kind of what inspired me. I’ve been a pizza enthusiast for the last 15 years.”

In 2013, after Paul was laid off from his job, he and his wife, Cassie, launched Camzies Pizza (named for their two children Cameron and Mackenzie) with a mobile pizza oven built by Paul that they set up at Oshtemo Township Park and at Flesher Field. Soon Camzies was booking larger events, and business took off. Paul built a second mobile pizzeria.

Ken and Cassie Paul now operate two mobile pizzerias, and business has been so brisk that they recently partnered with local business owner R.J. Saline to open a wood-fired pizza drive-thru called the Kalamazoo Pizza Company, at 2120 S. Sprinkle Road. The drive-thru, which opened in June, serves Camzies pizzas.

The Pauls plan to continue operating their mobile ovens across Southwest Michigan, taking them to events at the Gilmore Car Museum, the Paw Paw Wine and Harvest Festival, the Kalamazoo County Fair, and the Texas Corners Farmers’ Market — to name a few. This season is already fully booked.

“The scheduling part is the key to the mobile food business,” Paul says. “If you’re going to be a food truck owner, you’ve got to be a good scheduler.”

Paul’s first pizza oven, which he calls “the event trailer,” took 240 hours to complete. The trailer bed measures 6 feet wide by 12 feet long and, when fully set up, spans a 20- by 20-foot area. This first oven has since been redesigned three times, getting more efficient with each revamp. Paul never shirked from building it himself. Ever since he received a Dewalt jigsaw for his 16th birthday, he’s been constructing everything from furniture to barbecue smokers.

Paul’s second oven, referred to as “the catering trailer,” took 80 hours to finish. The catering trailer measures 5 feet wide by 11 feet long and, when set up, encompasses approximately a 15-square-foot area. Both ovens are made out of refractory cement, which has the ability to withstand high heat.

Camzies also has a walk-in cooler on wheels that measures 5 feet by 8 feet. “It’s like a builder’s trailer that has a window air conditioner that runs down in the 30s,” Paul says. “We can store about 1,500 rounds of dough.”

The 900-degree wood-fired ovens hold three 12-inch pizzas that are ready in three to five minutes. If it were running at maximum efficiency, pizzas could come out of the oven in 30 seconds, Paul says. But he laughs and explains that people, including himself, aren’t quite as quick. It takes a lot of tending and stoking of the fire to maintain the oven’s temperature.

There are hard parts about operating a mobile food trailer. Most of the business happens in June, July and August and requires a lot of prep time. Figuring out how to be more efficient and get more tasks done in a short amount of time is extremely important, Paul says.

“One of the keys has been reducing setup and teardown time,” he says. “When designing the trailers and deciding how to build a trailer, the biggest thing is efficiency.”

Paul makes everything from scratch. Prior to starting Camzies with his wife, he worked as a delivery systems analyst at Kalsec, a Kalamazoo-based company that produces natural colors and flavor extracts and nutritional ingredients for the food, beverage and pharmaceutical industries. Paul’s experience there helped him to create Camzies’ herb-infused dough and homemade pizza sauce, which he describes as a sweet Italian garlic blend.

The company uses toppings that are fresh, locally grown and thin-sliced. Typically the catering trailer offers nine to 10 topping choices, while the event trailer provides 10 to 12. “Part of the design in the business plan is that we always have the basic essentials,” he says. “We prep smaller amounts but have a lot of variety.” Preparing smaller amounts helps prevent food loss.

With Paul and his wife “dividing and conquering” to keep up with Camzies’ event and catering season, Paul says he appreciates having a business-minded partner like Saline on board for the drive-thru location. Saline, a self-professed pizza enthusiast, reached out to the Pauls about combining forces.

“We met a few years back and had a pretty good discussion about a business partnership,” Saline says.

To create more workspace at the Kalamazoo Pizza Company drive-thru, the partners constructed a wood-fired pizza oven on the outside of the 450-square foot building, which can be accessed from the inside of the building. The drive-thru’s menu offers 6-inch, 9-inch, 12-inch, 15-inch and 24-inch pizzas.

“We’re just selling pizza, and that’s it,” Paul says. “We have a simple menu, a simple process, and it’s custom, fresh and hot.”

The Pauls and Saline hope to open another drive-thru in about a year, with inside seating, Ken Paul says. But as the business grows, Paul refuses to compromise on one aspect.

“When people scale things up, you lose a lot of what the original, authentic value of the food is,” he says. “If the business wants to grow to a point where it’s going to jeopardize that, then that’s the furthest it can grow.” 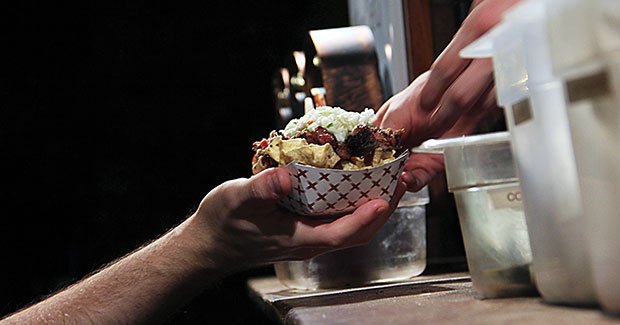 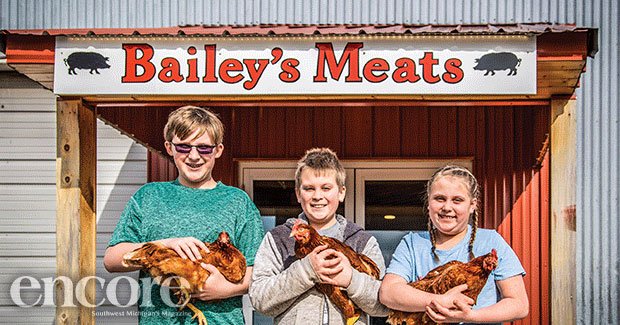