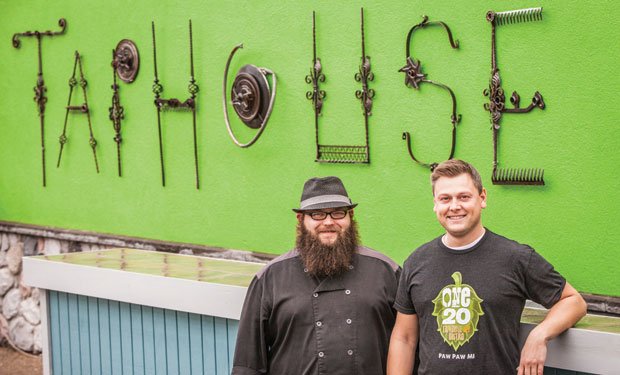 Around the time he was 10 years old, Eric Cook visited his Aunt Nancy in Raleigh, North Carolina. During that trip, Aunt Nancy whipped up a special chicken dish that Cook enjoyed so much that he asked her to write the recipe down. Over the years “Aunt Nancy’s Chicken” has become one of Cook’s “go to” meals, and it now has a starring role at his new restaurant, 120 Taphouse & Bistro.

The restaurant, located at 120 E. Michigan Ave. in Paw Paw, is the new incarnation of Bistro 120, a restaurant that had served seasonal homemade meals since 1995.

“People came to the Bistro 120 because they wanted a good home-cooked meal from scratch,” Cook says.

Cook, who grew up and still lives in Mattawan, purchased Bistro 120 from longtime owners Lynne McGuire and Wendell Meade and reopened it in July as 120 Taphouse & Bistro. It still adheres to the earlier restaurant’s tradition of offering seasonal, fresh local food.

“We get a potato, soak it in water for at least a day to get the starch out and then put the potatoes directly from the water into the oil,” Cook says. “It takes us twice as long to cook them.”

Cook says that society has forgotten the incredible flavors of garden-to-plate meals, and, in order to attain those in his dishes, he is building relationships with area farmers. Doing so, he says, provides wins on many fronts.

“One of my mottoes is ‘Eat fresh; eat local,’” Cook says, “because if I can support the local farms and then you could support me, we keep our dollars right here in the community. And, yeah, it might cost you a dollar or two more to have something locally grown, but just think how much you’re helping the environment by not having it shipped from here to here to here and (also) yourself by not having it processed beyond belief.”

Before becoming a restaurateur, Cook worked as a reporter for the Kalamazoo Gazette and WMUK and as a financial advisor with Edward Jones and Merrill Lynch. Managing people’s retirement portfolios was stressful, he says, especially during the Great Recession, when one of his client’s lost $40,000 in one day. As far as writing, Cook explains, “I didn’t like writing. I liked exploring.” And that exploration, is what he loves about cooking. Cook enjoys creating new flavor combinations and then sharing his discoveries with others.

When Cook decided to purchase the Paw Paw restaurant, he tapped childhood friend Andy Truitt to be the eatery’s head chef and kitchen manager. Friends since their ninth-grade history class at Mattawan High School, they shared the same ideas about food, Cook says. Truitt had a solid job, working as the head chef at Zoetis for 12 years, but two days after Cook presented his idea to Truitt, his friend jumped on board. “I couldn’t imagine being even remotely successful without him,” Cook says.

Planning the restaurant’s first menu was fun, he says. Truitt possessed the professional culinary background while Cook had been making meals for family and friends since college. Stuffed burgers topped the list. The two men also added Doobies, which are egg rolls of a sort with a variety of fillings. The Irish Doobie, for example, is filled with homemade corned beef and sauerkraut, and the Southern Doobie is stuffed with smoked pulled pork, from-scratch sweet bourbon barbecue sauce, fresh, diced red onions and Colby-jack cheese.

Both men enjoy creative experimentation with food and encourage their staff to do the same. One of the restaurant’s sous chefs was moving away and on his last day Cook challenged him to “make me your best thing.” The sous chef whipped up a turkey club with cheese and pesto, and the “Chad Sandwich” (named for the sous chef) was born.

“When somebody comes in and asks, ‘Hey, where’s that sandwich I had a few weeks ago with the pesto?’ I say, ‘The Chad Sandwich!’” People inevitably ask, “Who’s Chad?” and Cook gladly fills them in.

“That’s not my background,” Cook says. “What’s easier is to just use my palate and just buy the best.”

A month after its opening, 120 Taphouse & Bistro had a special visitor: Aunt Nancy. Cook proudly introduced her to the kitchen staff, announcing, “This is the Aunt Nancy.” So, did she sample her namesake dish? Cook laughs. Nope, she went with the pulled pork.

“I told her, ‘I don’t know if you should try it. Maybe we don’t make it as good as you do,’” he says. But, Cook admits, he still has that handwritten recipe from 20 years ago. Just in case.

When Eric Cook decided to purchase the Paw Paw restaurant Bistro 120, he tapped childhood friend Andy Truitt to be the eatery’s head chef and kitchen manager. Friends since their ninth-grade history class at Mattawan High School, they shared the same ideas about food, Cook says. Truitt had a solid job, working as the head chef at Zoetis for 12 years, but two days after Cook presented his idea to Truitt, his friend jumped on board. “I couldn’t imagine being even remotely successful without him,” Cook says.