Kalamazoo’s Got the Blues 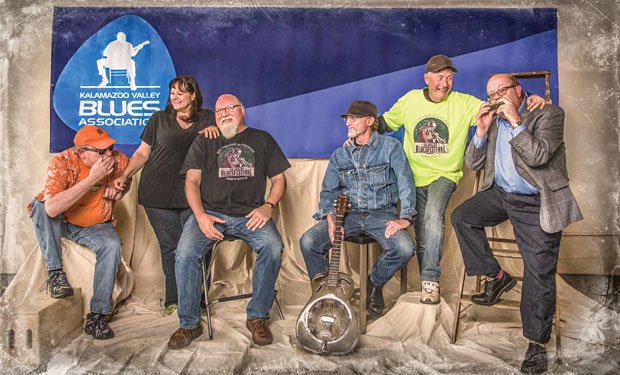 The blues. Plaintive, yet appealing, with melancholy melodies accented by flatted “worried” notes, blues songs are often lamentations of longing for a better life — someday, somehow. And in that essence of expectation lies the blues’ alluring strength.

Blues music stems from African roots, transplanted in America as work songs and field hollers on slave plantations in the Deep South. After abolition, the genre sprouted in juke joints in the Mississippi Delta and, like a vine rife with tenacious passion, wound its way north to blossom with fiery slide-guitar riffs and passionate vocalizing in the nation’s major blues meccas: Memphis, St. Louis, Kansas City, Chicago, Kalamazoo.

Yes, Kalamazoo is a bona fide “home of the blues” — and home of the Kalamazoo Valley Blues Association (KVBA), which in July hosts its 23rd annual Kalamazoo Blues Festival at the Arcadia Creek Festival Place.

Dave Hunt, a KVBA founding member and guitarist/lead vocalist in Seventh Son, a blues band that performed its first gig in 1987 and is Southwest Michigan’s oldest continually performing blues band, says, “The first year, we talked to the city, and they said, ‘What weekend do you want to have it?’ That was before there were a lot of festivals, like there are now.”

Another KVBA board member researched weekends that consistently had the least rain during the previous decade and picked the second weekend in July. “He nailed it,” Hunt says. “We’ve only had to collect our rain insurance one time.”

The Kalamazoo area’s blues heritage had already been strong prior to that first festival, with the presence of Gibson Guitar Corp. on Parsons Street and a handful of close-knit bands that played at nightclubs devoted to the blues. One of these clubs was Missias’, “the working man’s bar,” on Eleanor Street between Rose and Burdick.

“In the summer of ’93,” Hunt says, “they fenced off part of their parking lot and had Seventh Son and Annette Taborn’s band there. The place was packed, and they made oodles of money, so some of us said, ‘Why are we getting paid only a flat fee of $200?’” With the intent of helping the bands make more money, Hunt and other blues aficionados formed the KVBA that fall.

At the same time, entrepreneur Wayne Deering was pioneering outdoor events in a downtown parking lot near Arcadia Creek. With Deering’s advice, plus rental of his crowd-control fencing and ticket booths, the KVBA launched its first festival in 1994. It featured local bands, groups from Lansing and Grand Rapids, and two Chicago-based headliners, Lil’ Ed and the Blues Imperials and the Chicago Rhythm & Blues Kings. Each band received $800. It was a huge success, but, “it was hard work,” Hunt says. “We really didn’t know what we were doing.”

With experience, the KVBA has become more skilled at putting on a party. Board member Nick Hatzinikolis calls the Kalamazoo Blues Festival “our Super Bowl … three wonderful days of fun, food, love and blues.” Festival coordinator Dennis Massingill claims it’s “a showcase among the top 10 blues festivals in the U.S.” Drawing as many as 10,000 music lovers annually, the Kalamazoo Blues Festival is even mentioned in the how-to book Blues for Dummies.

Over time, attendance at the festival has gone up and down. In one of the better years, late-arriving fans were halted at the gate because the festival site was already packed to the max. Another year, festival attendees hailed from 26 states. Many volunteers also live outside of Michigan. “They come in on Thursday and leave on Sunday,” says Colleen Barker, the KVBA’s director of sponsorship, marketing and membership.

“We’ve brought several million tourist dollars into the community,” says KVBA’s vice president, Mike Barker. “Of the money we spend for goods and services to put on the festival, the lion’s share goes to local businesses.”

Yet, there have also been years when proceeds were so low that board members had to charge expenses on credit cards and borrow money to pay the liability insurance premium.

Hunt looks on the down years with a philosophy that’s germane to the genre. “It’s not the blues to be all shiny and polished and flush with cash,” he says. “The blues is about trials and tribulations and financial troubles.”

Yet, the blues is also about hope and perseverance. Spirituals and code songs on Southern plantations signaled black slaves to board “the gospel train” (the Underground Railroad) and “follow the drinking gourd” (the Big Dipper) to freedom in the North. Lyrics from the 1900s, such as those of Esther Phillip’s “I’m Gettin’ ’Long Alright,” speak of overcoming jilted love: “I cried like a baby when you went away last Friday night (but) I done made me some connections and, believe me, I sure am gettin’ ’long alright.”

With festival expenses of more than $100,000, the KVBA relies on periodic fundraiser concerts and festival sponsors. Kalamazoo radio stations WRKR (107.7 The Rocker) and WIDR, the student station on Western Michigan University’s campus, are natural partners. But other sponsors, such as casinos and car dealerships, aren’t necessarily associated with music. Kalamazoo Valley Community College’s contribution is organizing a competition among its commercial art students to design a new festival logo each year.

Sponsors receive a listing in the festival’s program, complimentary passes and visibility on banners and the KVBA’s website and social media. KVBA member Hatzinikolis says sponsors “get to interact with the blues community throughout the year. This generates a buzz and keeps the interest level high, so by the time of the festival, people are ready to rock ’n’ roll … er, blues.”

Son of the blues

Hatzinikolis’ humorous slip of the tongue confirms just how far the blues has extended from its roots, a truth summarized in lyrics by blues legend Muddy Waters recorded in 1977: “Well, you know, the blues got pregnant, and they named the baby Rock & Roll.”

Then came the British invasion in the 1960s, whose performers covered many of the blues classics and transformed them into rock ’n’ roll chart-toppers. As the genre was “discovered” by white folks, it generated increased popularity for aging but more recent black blues artists: Muddy Waters (1913–1983), B.B. King (1925–2015), Bo Diddley (1928–2008) and Buddy Guy, who played at Kalamazoo’s State Theatre (again) last October and will turn 80 in July.

Sue Weaver, the KVBA’s newsletter editor, says, “When I first heard about the blues, I said I didn’t know what blues music is. Doug (Beckman, a founding member of Seventh Son) said, ‘Oh, yes, you do.’ And he started talking about Janis Joplin, Cream, The Rolling Stones, The Doors, Steppenwolf, Bob Dylan, Jimi Hendrix, Eric Clapton and all those musicians I listened to and loved.”

Blues in the schools

Yet, The Blues National Educational Outreach Campaign says, “As profound as the blues has been to the national music experience, it has only occasionally entered the American classroom, mostly through individual teachers who were committed blues fans.”

For more than 20 years, former KVBA board members Mike Irelan and Doug Beckman have done their share to educate students through the KVBA’s Blues in the Schools project. Their presentation encompasses Beckman playing tunes on his collection of unusual instruments, including a cigar-box guitar and a 1937 National Duolian steel guitar.

Also, since 2000, the KVBA has annually awarded a music scholarship to an area high school student based on a written essay and involvement in music in school and the community. In 2013, the award was renamed the KVBA Boogie Woogie Bob Peters Music Scholarship in honor of Bob Peters (1956–2010), a multi-talented artist who had been a fixture on the local blues landscape.

Yet, as with many established entities, questions arise about the future of the local blues community.

Marty Spaulding, blues entrepreneur and owner of The 411 Club, no longer produces a weekly blues radio show on WRKR, but KVBA board member Irelan does host the Blues Power show every Tuesday night from 8–10 p.m. on WIDR.

While DJs on classic rock stations play blues tunes, they usually don’t identify the genre. “They aren’t saying, ‘Here’s a blues song you might like.’ This is a problem,” says Massingill.

And even though Baby Boomers recognize the blues’ distinctive sound, they don’t take in live concerts as they did when younger. “There’s no denying it,” Hunt says. “Blues fans go out less frequently, they stay out less late and they drink less alcohol.”

Yet, enthusiasm on the KVBA board still pulses strongly. Former festival volunteer coordinator Nancy J. King, who got involved in 1994, notes that, even with a limited budget, the Kalamazoo Blues Festival brings in prime national entertainers. “Each year we have some really nice new talent who are not well known but go on to a lot of fame within the next couple of years,” she says.

Board member Lynn Headapohl says the KVBA is generating more interest through ads on blues websites throughout Michigan and surrounding states.

Similarly, musicians throughout the Kalamazoo Valley blues community continue to adapt. Big seven-piece bands, like Seventh Son, rarely play three or four gigs a month in large venues with a spacious dance floor, which was once their norm. Today, more common settings are cozy taverns, suitable for a soloist or a duo playing acoustic instruments.

Acoustic. That word resonates to the roots of the blues. According to a PBS report, when African-American bandleader W.C. Handy discovered Delta blues, he did so in a train station in the hamlet of Tutwiler, Mississippi, circa 1903. Handy had missed his train and slept on a wooden bench. When he awoke, he heard a “ragged black man sitting next to him, singing … and sliding a knife against the strings of a guitar.” The music was the blues. The lyrics were stark poetry. And the presentation was acoustic.

Then, as well as now, blues singers tell of life as it is. Bleak? Yes, but with an undertone to rise up and live on. That attitude of guarded optimism also comes through when blues musicians talk about the future of their genre.

As blues icon Willie Dixon said, “As long as American music survives, so will the blues.”

What: 22 bands, both local and from afar, including these headliners:

Special Treats:
Free one-hour workshops for musicians and blues fans will be offered July 8 and 9. Topics include harmonica and guitar techniques, women in the blues, cigar box guitars and more.

Programs for children will also be available from noon–5 p.m. July 9.