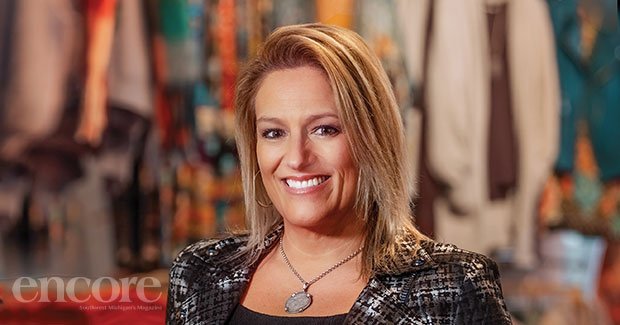 Lana Hoffman never quits. No matter what’s thrown at her, she charges forward.

As the owner of a successful chain of local designer boutiques, a professional singer, and a hero to cats, she has secured her spot as a triple threat in the two decades that she has called Kalamazoo home.

Born and raised in Illinois, Hoffman arrived in Kalamazoo with the idea of being a teacher. But life had other plans, and before she knew it she had made a name for herself as a professional singer performing with the Lana Hoffman Trio and at the Kalamazoo Civic and Farmers Alley theaters, had opened boutiques in Kalamazoo, Saugatuck and St. Joseph and a pop-up trailer boutique, and had fostered about 400 cats. Since then, she has scaled down to two boutiques (in downtown Kalamazoo and St. Joseph) but has not slowed down. In the following interview, she talks about her varied endeavors.

Honestly, I lost track a few years ago at around 350, so 400 is my best guess. I started by fostering a few at my original boutique on Western Michigan University’s campus. In 2008, I had experienced a lot of personal loss and went to Kalamazoo County Animal Services thinking that I would get one cat for myself. When I saw how many cats were there, I was shocked. I started volunteering and then decided to take a few cats to the boutique because the shelter was so jam-packed. People started coming into the boutique to see the cats. I usually had about five or six cats rotating through there. People would get to know the cats and then start the adoption process for them through the animal shelter. It was not like I was just giving away cats. Everyone was vetted, and the cats went to good homes. (Hoffman’s foster cats are no longer in her boutique, but she keeps a photo of them up by the register for interested patrons.)

You were initially a teacher. What made you switch gears to open a line of boutiques?

When I arrived in Kalamazoo in 2000, teaching positions were harder to come by. I taught for a few years but never found the right spot. At the same time, I saw a market in Kalamazoo that was ready for a high-end boutique. I believed the shoppers, especially the college kids, would like an option that was not the mall or a big-box store. (Her shop, now on the Kalamazoo Mall, is called Lana’s Boutique, as is her shop on State Street in St. Joseph.)

How did you break into the local music scene?

I started doing shows at the Kalamazoo Civic Theatre and was fortunate to portray Patsy Cline in A Closer Walk with Patsy Cline. The Civic was pivotal in my singing career in Kalamazoo. Not only did I meet some of my best friends I still have to this day, but I also worked with many talented musicians, and that opened a lot of doors. Performing live shows quickly became my passion, and I found myself singing at quite a few venues downtown, including Webster’s, the Union and many more. In 2010 I was approached about doing A Closer Walk with Patsy Cline again at Farmers Alley Theatre. Of course, I was delighted to do it and work with the many talented artists and staff of that theater. My jazz performance continues to grow and evolve to this day, and each new opportunity is a delight. Today I can say that I perform with some of the top musicians in the area, which helps my voice and style constantly grow and evolve.

You’ve played Patsy Cline twice now. Have you always been a fan of hers?

Patsy Cline was probably my No. 1 influence growing up. I used to sing a lot more country, and she is what inspired me. Her song “Crazy” is perhaps my most requested song.

What is your favorite part of performing?

Making a connection with the audience I’m performing for at each show. I love reeling the audience in and making them feel something. It’s a great feeling to sing a song to the point where it catches someone’s attention and moves them. I enjoy keying in to what the audience wants to hear and then just nailing it.

Your boutiques and music career both survived scary times around 2008 and through Covid. What are you looking forward to as things start coming back?

Looking at the music scene, we have lost quite a few venues because of Covid, but more and more are opening up. I think people are hungry for live music and being social. Music is universal, and it helps heal. I’m hopeful something new will come in and take over the vacant spot that was The Union. That place was essential to the Kalamazoo music scene.

I hope Southwest Michigan keeps growing in the right direction as far as the boutiques. Downtown Kalamazoo was hit pretty hard during Covid, but several of us did survive, and there have been quite a few new businesses recently. I’m hoping people will continue to support local businesses, because local businesses hire local people and really give back to the community. Lana’s Boutique customers have always stepped up, and many were concerned and wanted me to stay in business. It makes me hopeful that all small businesses can start to thrive again.

— Interview by Julie Smith, edited for length and clarity