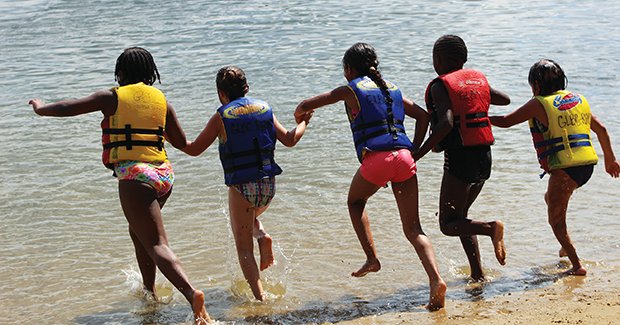 Mike Longenecker, director of the Great Lakes Burn Camp (GLBC) and retired city of Jackson firefighter, has a standing appointment each August for a manicure at a special salon.

“You have to set up an appointment and then you pay them in candy,” Longenecker says, chuckling, while describing a salon the youngest girls at camp opened to offer nail, hair and makeup services. “The girls are funny how seriously they take it. It’s a riot.”

Having a riot is the point. GLBC, to be held Aug. 5-10 at Pretty Lake Camp in Mattawan, is an annual camp that offers burn survivors ages 6-17 a chance to “laugh, play, heal and grow” — four words that Longenecker says make up the camp’s positive motto.

“We want the kids to come and just laugh, play, heal and grow, and it happens a lot,” he says. “When we have kids come back to camp (every year), I think that shows we’re doing something right.”

GLBC held its inaugural camp in August 1995 after Chris Klavon, a friend of Longenecker’s and other Jackson and Ann Arbor firefighters, was inspired to start one after volunteering as a counselor at a burn camp in Minnesota in 1994. The year before, Klavon and his family were on their way to a Memorial Day parade, Longenecker explains, when a drunk driver struck their vehicle. Klavon was burned on 75 percent of his body.

“He came back (from camp),” Longenecker says, “and called me and said, ‘Mike, this is the neatest thing I’ve ever done. Let’s set up a camp in Michigan.’”

Klavon wrote to burn units in hospitals across the state to generate support for the camp and to refer their young burn-unit patients to camp. At the end of November 1994, doctors, nurses and firefighters met in Jackson. Dr. Alan Messinger, a plastic surgeon at Bronson Plastic Surgery Specialists in Portage, brought along

Don Jones, then-director of Pretty Lake Camp, who offered to hold the camp there.

“We took it (the offer), and nine months later we did our first camp, with 45 kids,” Longenecker says.

To get the camp off the ground, everyone went to work to get the word out. Between hospital staff and the “brotherhood of the fire service,” Longenecker says, it happened quickly. People and organizations readily responded by holding events to raise money. Others helped hammer out details, including programming for the campers.

“Pretty Lake helped us a lot in the beginning because we didn’t know how to run a camp,” he says. “We would hire their staff and put in some of ours. Each year we started (adding) more and more of our staff. About year five, we were finally fully on our own.”

Starts with a parade

Each year the camp kicks off with the Great Lakes Burn Camp Parade, which starts at Wings Event Center, near Sprinkle Road and I-94, and ends 10 miles away, at Pretty Lake Camp. People line the parade route, which runs down Portage Road to Centre Avenue to the camp on Q Avenue, as police, ambulance and fire trucks from Calhoun, Kalamazoo, Van Buren, Allegan and Barry counties and sometimes from Indiana and Lansing, with lights spinning and sirens blaring, carry the campers to their destination. Motorcyclists including members of firefighter and other biker clubs, serve as parade escorts.

“Last year there were over 470 motorcycles, and 42 fire trucks,” Longenecker says.

Until GLBC, kids from Kalamazoo burn units attended burn camps in Connecticut and Colorado, he says, and burn survivors that were treated at University of Michigan hospitals went to a burn camp in Minnesota. Since that first camp, the number of campers has grown, as campers come from across Michigan and occasionally out of state. This year Longenecker expects up to 80 campers.

While at camp, kids participate in typical camp activities like swimming, kayaking, arts and crafts, and field games, but there are also special activities such as playing in giant inflatables or exploring a mobile zoo. The U.S. Coast Guard has even flown in a helicopter and demonstrated simulated rescues.

“We’ve had a drive-in movie night with an inflatable movie screen that’s 30 feet tall and 40 feet wide,” Longenecker says. “Our kitchen staff will set up snacks in the field like a little concession stand.”

Every year, Longenecker is witness to the ways Great Lakes Burn Camp helps the campers, especially the way it opens them up, he says. Nobody points or stares at the kids’ scars, and no one teases them.

In his 20 years with GLBC, he has garnered too many special memories to count. He recalls that a camper from Texas whose arms were amputated below the elbows because of burns wanted to kayak, so the camp staff carefully attached gloves over his arms with medical tape and then used duct tape to attach the paddles to the gloves.

“It took him a little longer to get across the lake, but he could do it,” Longenecker says, noting the camper also did the ropes course.

An 8-year-old girl who lost her left hand and four fingers from her right hand participates in archery. Longenecker says the girl’s father told him that she enjoys camp so much that whenever the family is heading somewhere, she asks, “Am I going to camp?”

Many campers return to GLBC as adults to serve as counselors. A former camper now volunteers as a lifeguard there. Longenecker says when this young woman came to her first GLBC camp, at age 6, she was crying and hugging her parents when she was dropped off at the bus pickup point. The next year at drop-off she hopped out of the car and forgot to say goodbye to them.

“There are tons of stories like that,” Longenecker says. “The friendships are just incredible from camp. It’s like we’re a big family.”

Another favorite story involves two former campers who returned as counselors. Two years ago they were married, and recently announced they had a baby on the way.

“She told me she wouldn’t change a thing in her life because she met her husband at camp,” Longenecker says. “They would never have met had it not been for camp. That’s one of my real proud moments.”

Every year, Mike Longenecker is witness to the ways Great Lakes Burn Camp helps the campers, especially the way it opens them up, he says. Nobody points or stares at the kids’ scars, and no one teases them. “That’s really good for their social well-being and self-esteem,” he says.

A Wealth of Help 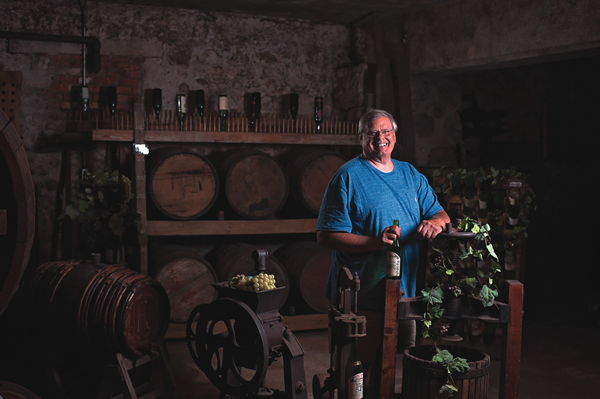