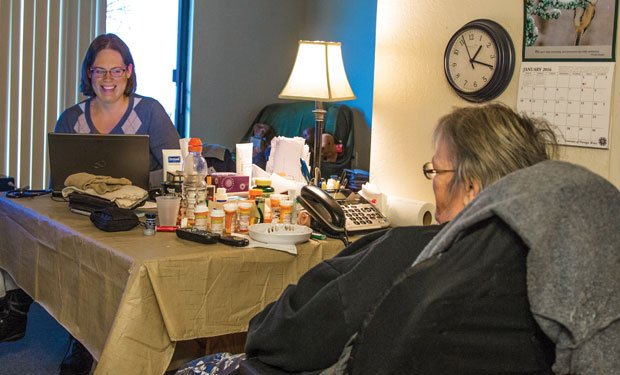 Dr. Miriam Veldt talks with patient Catherine Gonzalez, during a house call at Gonzalez’s home.
Kalamazoo medical and dental professionals step out of the office

Dr. Miriam Veldt is literally a doctor without borders.

In today’s world, doctors who make house calls seem like something out of Little House on the Prairie. But for people in the most desperate situations, such doctors are exactly what they need.

“In medical school, you’re taught that you have to fix everybody,” says Veldt, 36, of Portage. “By doing (visits), you’re keeping patients out of the hospital and keeping them from getting worse.”

A member of the Kalamazoo office of Visiting Physicians Association (VPA), Veldt travels to nearly a dozen patients a day to administer checkups, treatment or emergency care. She’s welcomed into the homes or care centers of her patients, most of whom are elderly, and gives them the same medical attention they would receive at a doctor’s office. The only difference is that the patients stay where they’re most comfortable.

“This way I know more about my patients and the environments they’re in,” Veldt says. “We develop a relationship quicker.”

Visiting Physicians Association is a national firm that sends doctors and nurses on house calls. Veldt is one of the seven medical providers (four doctors and three nurse practitioners) in the local office, which opened in 1995 and serves about 12,000 patients in an area that stretches from south of Grand Rapids to Albion to the border of Indiana and Lake Michigan. VPA sends its doctors, each partnered with a medical assistant, to patients’ homes for whatever health care the patients need. Almost anything that can be done in a medical office can be done in a VPA visit. The doctors’ vehicles carry EKG machines, centrifuges for blood work, and ultrasound equipment.

But medical doctors aren’t the only ones making house calls. Dentist Tiffany Burns has taken that same concept and applied it to the dental business. She created Smile Savers Mobile Dental Service in 2014 to offer basic dental care through home visits. This is often very simple care, such as instruction on flossing and proper brushing techniques. To get patients started on the right track, Burns brushes and flosses for them during her visit. As with VPA visits, Burns is there to make sure the basics are taken care of, so patients don’t have to spend time and money on emergency trips to a dentist.

“Most people only go out (to the dentist) when they have a toothache,” Burns says.

Right now she offers Smile Savers about 10 hours each week, but she hopes to build her client business to full time in the next few years.

Andonian and Burns both say their services are specifically for people who are unable to leave their homes to receive regular medical care. Their clients are often referred to them by Kalamazoo Senior Services and senior apartment complexes. Burns visits senior homes but also treats disabled patients and children in rural areas who don’t have easy access to a dentist.

Andonian says hospitals sometimes recommend VPA to frequent patients who need more attention than they can get in the emergency room. VPA isn’t an emergency service; the doctors usually work 9 a.m.–4 p.m. weekdays.

Meeting with patients in their homes can present unique challenges, however.

“It’s not a clinical environment all the time,” Andonian says. “Sometimes it’s a dirty home, or a person is smoking, even if they’re not supposed to.”

She says every health care provider on staff has had to push a car out of a snow bank because patients often live in areas where the roads aren’t plowed.

Veldt, who started her career in a traditional medical office, joined VPA in 2013 “to try something different.” She says she likes that she can help prevent people from getting sick, instead of just fixing what’s wrong. Seeing patients in their homes makes them more relaxed and likely to discuss everything that’s making them feel ill, she says.

“People are really welcoming. They already know what we’re going to do. They talk about other issues, not just the emergency.” 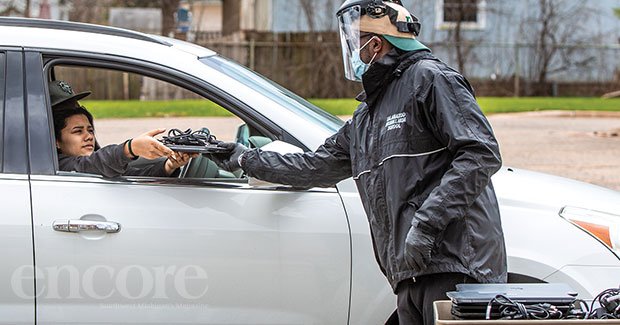 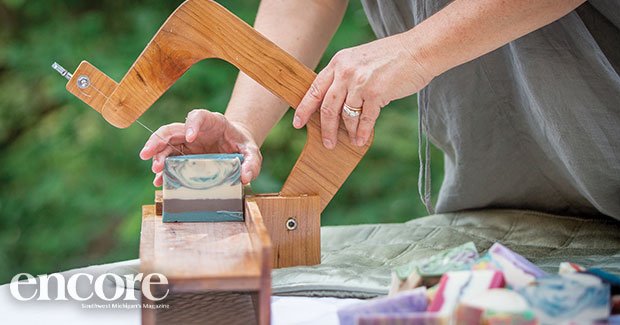 Unordinary times cry out for the desperately ordinary