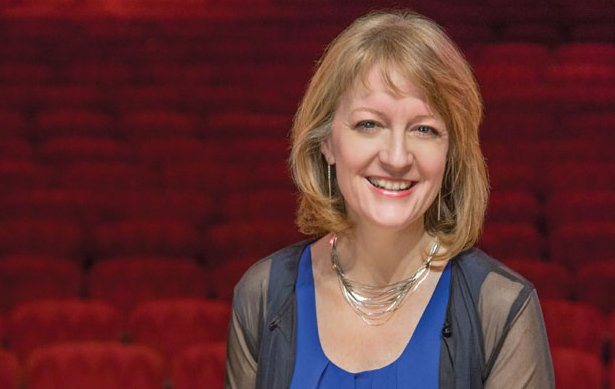 Encore-Magazine-Back-Story-Maria-Schneider-April-2016
Director of Operations, The Gilmore

For 19 days, audiences at the Irving S. Gilmore International Keyboard Festival will be enthralled by the artists they see in the 70 performances at 20 venues across the region. But will they think about how quiet the wrappers are on the 10,000 cough drops available for audience members to stifle coughs? Will they consider the coordination needed to bring dozens of expensive Steinway pianos from New York and Detroit to Kalamazoo for the festival? Will they make note that most every performer has towels on stage with them?

Probably not, but Maria Schneider sure will. “Anything that has to do with the performances falls right in my area,” she says, describing her job. And she means anything. From finding lost luggage for a performer to making sure microphones are placed correctly to, yes, ordering cough drops in bulk, Schneider and a small team organize the million details of the festival’s logistics.

How did you get to where you are today?

After I earned a master’s degree in oboe at the University of Southern California, I began auditioning for jobs while also doing office work. I even worked for a retired superior court judge in Los Angeles, which is where I gained experience in contract work and administration.

The Kalamazoo Symphony Orchestra had an opening in oboe and had jobs open in administration. I was the KSO’s operations director for seven years. Then I came to The Gilmore, where I’ve been since 2009.

What do you do as the Gilmore’s director of operations?

What don’t I do? There are many, many components to my job, but one of the biggest is the festival. It’s like putting together a huge reunion of people who love pianos and making sure everyone who attends as a patron and artist has what they need and are comfortable.

It really takes a team, though. I have a staff of five that includes coordinators for volunteers, operations and ground transportation.

That’s not a huge team for such a massive undertaking.

It’s not. But the volunteers are crucial in making the various venues work. And I have people who are helping me at each venue — like Ray Jenkins at Chenery Auditorium and Kevin West at Dalton Center Recital Hall — who are really key to making those concerts go well.

What keeps you busy in non-festival years?

The Gilmore presents concerts throughout the year, almost once a month, and I handle those by myself because I only have staff for the festival.

Committee members are always going to concerts, listening to recordings, and I provide the support for them to be out there doing that secret work. The committee comes from all over, and, in addition to helping arrange their travel, I also coordinate their communication with one another so they can discuss these artists, whether online or in person.

Has there been a pivotal moment that influenced you?

I know it doesn’t seem related, but that moment was when my son was diagnosed with autism at the age of 3. That was 11 years ago now, but it redefined how I look at success because at that point your future becomes less clear. I felt it was really important to get perspective and that not much else mattered except what the future was for my kid. I had to get very serious because he needed early intervention and it required I take everything else out of my life to see what I needed to do for him. It helped me manage lots of different things and prioritize. It was really a resetting of my life, and it helps me to this day.

How do you think dealing with your son’s challenges has shaped your career?

I have a lot more of an understanding of our artists and their differing temperaments, their idiosyncratic behaviors and their need for repetition and focus. I’m not saying our artists have special needs, but I am so grateful to the teachers and health professionals that have helped our family along with our son because they have helped me learn to deal with people in a way that is more understanding.

I am much more patient and my anger management skills have grown immensely (she laughs).

Thinking about people who are being treated unjustly. I have a strong sense of justice and trying to take care of people. Gun violence in the United States has bothered me for a long time — even before the shootings in February in Kalamazoo. Sandy Hook was really a turning point for me. I am a little social activist in my spare time.

You are incredibly detail-oriented and organized at work. Are you like that at home, too?

Not as much. I try, but it’s about prioritization. You’ve got to pick your battles, right?