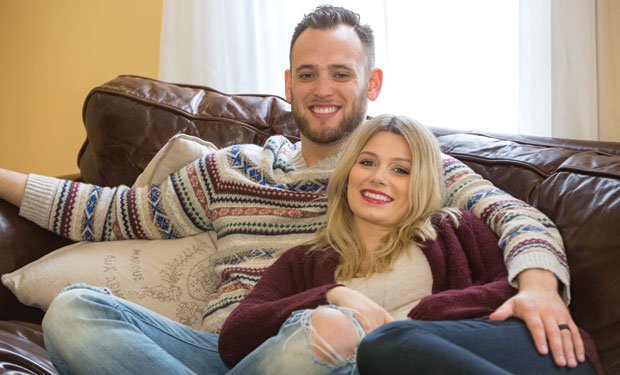 Matt Giraud relaxes with fiancée Aleena Hamilton at their Kalamazoo-area home.
On going from American Idol to American dad

If you think you see musician and singer Matt Giraud driving through Kalamazoo in a minivan with a bumper sticker that says “I used to be cool,” don’t be surprised. It’s probably him.

“I just exchanged my sports car for a minivan. It was the coolest thing I had left, but I’m a family man now,” he says. “I’m happier now with my fiancée and the kids. I’m happier to be back here in Kalamazoo, where everybody knows me but they’re not chasing me down for my autograph.”

The rock and pop artist, who gained superstardom six years ago while competing on the TV series American Idol, has traded in the lavish lifestyle that came with that success for something more domestic. Giraud recently moved back to the Kalamazoo area after spending a few years in Nashville, Tennessee. He and his fiancée, Aleena Hamilton, who had two children when they met, are likely the parents of a newborn by now — they were expecting a baby in December. At 30 years old, Giraud says he couldn’t be happier.

In 2009, America Idol catapulted the then-23-year-old Giraud to stardom, and he was soon a guest on The Ellen DeGeneres Show, The Jay Leno Show and Live with Regis and Kelly. He was being paid to sing in front of thousands of people — just as he had dreamed as a child.

But, contrary to many expectations, Giraud didn’t capitalize on that newfound fame by releasing a full-length album as many other Idol contestants do. “No record labels had come rushing at me,” he says. But that didn’t really bother him, he says, because he wanted to perform in front of live audiences rather than record in the studio.

He did, however, follow up his Idol run with an EP of a live performance recorded in Grand Rapids called Live at River City. In addition, he released several songs, including two collaborations —“You Don’t Know Me,” a duet with Anna Wilson that was No. 1 on the Itunes jazz charts and “Thank You,” with Jim Brickman — and two successful Christmas cover songs.

He also traveled the country performing, including appearances with symphonies around the country including in Anchorage, Alaska, and Phoenix, Arizona. He recorded demos for artists like Rascal Flatts and was even a special guest at an event in California at the request of Priscilla Presley.

But amid all that glamour and fame, Giraud says he was starting to realize that those bright lights weren’t everything they were cracked up to be. He says despite the money that followed his American Idol fame, he was concerned about the financial security of his career choice. It was difficult to budget money when he wasn’t sure how much he was going to make from one year to the next.

Giraud had other career concerns, especially artistically. He says he hadn’t discovered his identity and sound as a solo artist, and while he’ll always be appreciative of being on American Idol, he feared his subsequent career would be overshadowed by the celebrity of being on the show.

“It’s pressure when everyone’s rooting for you,” Giraud says. “People would come up to me and say, ‘I love your music. I hope you get a record. I hope things work out for you.’ And I didn’t want to come back and say, ‘It didn’t work out.’ There were times when I woke up in the middle of the night, dreading the embarrassment of having to be forgotten.”

Giraud remembers years ago when his middle-of-the-night thoughts were different. A younger Giraud, born in Dearborn and raised in Ypsilanti, envisioned a more famous, musically gifted adult version of himself. He would put on his headphones, close his eyes and imagine performing in front of thousands of people at a gospel convention in Detroit.

“I would imagine myself killing it on stage before I even had any real skill. It’s weird because I ended up doing all of those things,” Giraud says. “It’s like that movie The Secret. It’s the law of attraction.”

Giraud is a natural musician. The vocalist, pianist and drummer has never had an official lesson. He began his music career as a drummer at his church when he was 15 but has been singing as long as he can remember. He practiced singing when he was alone, but eventually others discovered he could sing and persuaded him to join a choir. He learned to play the piano as a Western Michigan University student, spending hours on the instrument in his residence hall’s community room, playing for anyone who would listen.

It was also in college that he started listening to musicians who were new to him, such as Louis Armstrong, Billy Joel, Bob Marley, Elton John and the Beatles. “These are some of the best songwriters ever,” he says. “It was embarrassing to not know any of them. But I grew up on gospel music, so all I listened to before were Christian artists like DC Talk and Kirk Franklin.”

At WMU, Giraud joined Gold Company, the university’s renowned vocal jazz group. The late Stephen Zegree, who was director of Gold Company at the time, helped Giraud hone his skills. After graduating with a bachelor’s degree in organizational communication and a minor in Africana studies, Giraud decided to stick around Kalamazoo, performing at local venues such as Zazios and Monaco Bay Piano Bar and Grill. Although he was having fun, he began to have his doubts about embarking on a musical career.

“I used to think about ‘What if I had to quit my music aspirations because I couldn’t survive off the money I was making?’” Giraud recalls.

His big break came when friends encouraged him go with them to Nashville, to audition for American Idol. After six auditions, Giraud was elated to hear the words “You’re going to Hollywood.” Giraud says performing for and with artists such as Stevie Wonder, Smokey Robinson and Carlos Santana was incredibly influential. He felt his two best idol performances were singing Ray Charles’ “Georgia on My Mind” and Carrie Underwood’s “So Small.”

But although he was living his childhood dream, something seemed to be missing.

After American Idol, Giraud’s then-manager suggested that he move to Nashville because the city offered more opportunities than Michigan. Giraud says it wasn’t long, however, before he started to miss Southwest Michigan. He missed his family and friends. He missed his favorite restaurants — Food Dance and The Crow’s Nest. And he missed bike riding on the Kalamazoo River Valley Trail with his friend and the city’s mayor, Bobby Hopewell. That longing for home was solidified almost two years ago when he met Aleena Hamilton through a mutual friend.

“I didn’t watch American Idol so I didn’t know who he was,” says Hamilton, who grew up in Vermontville. “I was like ‘Matt Giraud who?’”

While they were dating, Hamilton lived in Michigan, and Giraud was still in Nashville but would visit every weekend. Hamilton says she fell in love with his humor, his sensitivity and how well he bonded with her two children, then ages 3 and 5. After a few months of having a long-distance relationship, Giraud decided to move back to Michigan. On Dec. 2, 2014, while they were slow dancing in a room lit by a Christmas tree, Giraud asked Hamilton to marry him.

“I cried like a baby,” Hamilton says. The pair are planning their wedding for this spring.

Giraud says his new, domestic life is full of simple joys. He enjoys being awakened by the kids, having a good breakfast and running around the backyard and watching movies with his family. And when he’s not with his family, Giraud is often back bicycling on the Kalamazoo River Valley Trail.

Not that he has put off his music career to become a family man. He is in the early stages of recording an album, with plans for a crowd-sourcing campaign to fund it.

Giraud is still touring across the country and abroad, performing at events and private parties, while maintaining his domestic life. Hamilton says Giraud is busy — so busy she has observed him having to reheat his undrunk coffee several times every morning.

Giraud agrees with a laugh. It’s all worthwhile, he says.

“I’m a more selfless person now. It’s a new chapter in my life. It’s scary, but it’s fun and better.”

Ways to keep up with Matt Giraud

A schedule of his shows is available at bandsintown.com 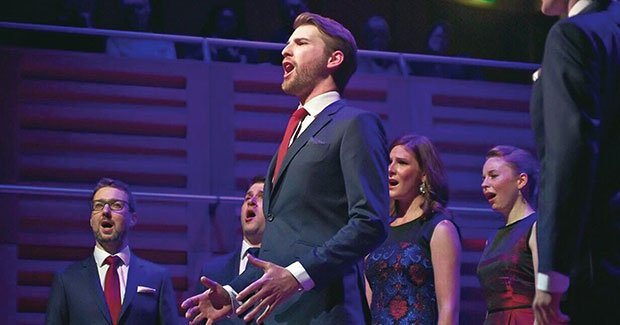