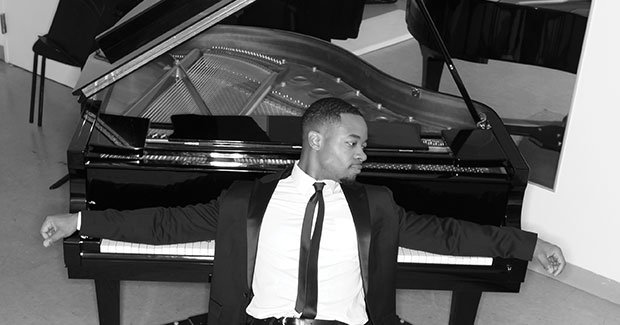 When Edward Callahan was just a boy, he used to stand in his room and bow to an audience that wasn’t there, pretending he was in the middle of a pool of applause from the adoring crowd in awe of his make-believe piano performance.

These days he’s not pretending. When he plays piano, people — including critics — take notice.

The 31-year-old Callahan’s road from his Kalamazoo bedroom to the stages of some of New York City’s biggest venues has predictably not been easy. But finding his love for piano at age 5 in many ways was.

As a kid, he got involved with karate, Little League and Boy Scouts. But the piano “stuck with me in such a weird way,” he says. “I wanted to try anything, but after I began playing piano, that was it. Being an only child at the time, the piano became a kind of sibling to me.”

Callahan’s natural talent was helped along by his childhood piano teacher, Billie Netterwald, who, after seeing his potential, had Callahan improvising, doing compositions and learning the ways that creating and playing music can move the emotions of player and audience alike.

A 2006 Kalamazoo Central High School graduate and Kalamazoo Promise scholarship recipient, Callahan went to Western Michigan University to study music education. There he was taken under the wing of now-retired music professor Silvia Roederer, who specialized in piano and who continued to help him hone his craft.

But Callahan says it was a moment near some WMU rehearsal rooms that sticks out as a highlight of his time there, when he was taken by the beautiful sounds coming from a piano that a fellow student was playing.

“She was playing Chopin’s Winter Wind, and I literally saw colors for the first time,” he says. “I could imagine snow, cars sliding, other pictures in my mind. When I see the piano now, I see endless possibilities of new discovery. So much is unknown, like outer space. It’s endless.”

On to the Big Apple

After his sophomore year at WMU, Callahan, knowing that he had to enter a bigger arts market not only to grow but to be seen by a wider audience, decided to take a chance. He packed up his bags and moved to New York City, playing gigs when he could find them and rehearsing when he could find time. The Big Apple’s fast-paced hustle culture opened his eyes.

“In Kalamazoo I was a big fish in a small pond,” he says by phone from New York. “Here, I was a fish just barely making it, just crawling through. I had to become more disciplined.

He took on a mentor, Damien Sneed, an adjunct professor at Nyack College’s School of Music who had performed with Winton Marsalis, Aretha Franklin and Jessye Norman. Sneed helped Callahan get a gig as a keyboardist for the 40th anniversary performances of The Wiz, and through Sneed, he met the music school’s dean. Within a few days he had applied and was accepted at the school, also receiving a scholarship.

“God has already called you to be what you’re gonna be before you’re born,” he says. “Moving was a big faith move. I had The Promise (scholarship). Good things were happening in Kalamazoo. I was barely making it, with little food, but my faith kicked in. It was God and me.”

Sneed kept after Callahan, telling him to rehearse more and put extra effort into his craft. Professional pianists exist in an incredibly competitive world, with the ceiling of opportunities existing somewhere around age 35, Callahan says. He used to practice two to three times per week. Now he pushes himself at the keyboard every day.

“I had some professors in my life say, ‘You’re never gonna play at Lincoln Center or Carnegie Hall.’ I don’t like people telling me I can’t do something. It hurt me. I thought it was my skin color, but it was that I had to take my practicing and dedication to another level,” he says.

Callahan remembers watching André Watts, the first black concert pianist to reach international fame, play piano, the virtuoso clad in a tuxedo and then taking a bow before an enthralled audience. It inspired him. He knew he could do that too.

“I didn’t know (before) that black Americans could do that,” he says. “He was so effortless, so polished. I knew that would be me.”

Callahan’s debut album, The Minor Keys, released late last year, reached the No. 1 spot on iTunes’ Classical Music chart for the United States and No. 9 on the Billboard Traditional Classical Music chart. It’s a classical album featuring works by such famous composers as Chopin and Schubert, with every composition in a minor key. Currently, he is practicing for entry into the International Schubert-Competition Dortmund, to be held later this year in Germany, and has been accepted into the Miami Classical Music Festival in June.

“One of my goals is to inspire others to do what they want to do,” he says. “When I play for people, I want them to have encouragement, to feel a sense of positivity, to leave saying, ‘Wow, I am recharged,’ just like listening to a sermon at church.”

“One of my goals is to inspire others to do what they want to do. When I play for people, I want them to have encouragement, to feel a sense of positivity, to leave saying, ‘Wow, I am recharged,’ just like listening to a sermon at church.”