Not Your Grandaddy’s Dorm 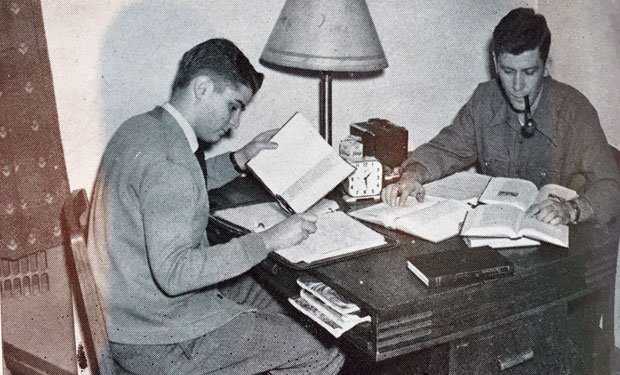 Students used to be able to smoke cigarettes and pipes in their dorms. Incense and candles were also formerly permitted in the dorm rooms. Now the entire campus is smoke-free. Image courtesy of the WMU Archives and Regional History Collection
Dorm decor offers glimpse of changing times

Through the decades, the utilitarian role of the college dorm room has remained constant: a place to sleep and stash clothes and books.

But over the years, Western Michigan University’s dorm rooms have evolved. While tiny, these spaces house more than a bed; they reflect changes in social mores, pop culture and university housing policies.

WMU students in the 1950s could smoke a pipe or a cigarette in bed. In the 1960s, students’ rooms were situated in clusters that shared a single phone, complete with a long, curly cord for privacy. Some dorms were single-gender. In the 1970s, residents could paint the walls of their rooms a color from the university-approved palette. In the 1980s, dorm residents watched television or listened to the radio in the Common Room.

Today there’s a no-smoking policy in all WMU dorm rooms. Posters, plants and colorful linens are allowed, but no painting. University-wide Wi-Fi allows binge-watching of movies and shows on one’s smart phone from a loft bed, and students listen to music through earbuds while studying.

Students of all gender identities/expressions and sexual orientations have housing choices, including Spectrum House, which is described on the university’s website as “a safe and affirming environment.” And that common laundry room, where a roll of quarters would get you clean underwear for a week? So 20th century. New student housing at the Western View complex offers a stackable washer and dryer and kitchenette in each apartment.

Here, we offer a photo album of dorms through the decades, interspersed with stories and photos of how some of today’s students are making their dorms their own unique spaces.

Encountering the decor of Room 218 in Western Michigan University’s Hadley Hall is like blasting into a Marvel comic book shop on the Death Star. With the room displaying Captain America posters, “Rogue One” paraphernalia, an action-figure collection, Marvel blankets, stuffed Spiderman dolls, comic mini-refrigerator magnets, a giant blue and purple tapestry, and Christmas lights, it is obvious the two freshman roommates are movie and comics fans.

Emma France, 19, a film, video and media studies major who wants to direct and film the next Marvel movie, and Zoe Jackson, 18, a journalism major and staff reporter for the Western Herald, say their shared obsessions with everything Marvel brought them together when they were looking for roommates last spring. They describe themselves as “random and quirky,” and their room lends credence to that description.

The two are not what you would expect Marvel lovers to be. Their room decorations include cards with quotes from Whole Foods, and their “thing” is their growing collection of Pop! dolls that covers the windowsill, a mound with favorite characters like Harley Quinn, Captain America and Luke Cage sitting at the bottom. The doll collection started after friends gave the roommates a couple of the dolls because they thought the duo would like them.

The Pop! dolls and other decorative items that bring personality into the room were mostly brought from home.

In addition to sharing a movie and Marvel mania, the roommates often binge-watch Netflix on their small TV that sits on their dresser in the middle of their desks.

They finished one show, the hit sci-fi thriller Stranger Things in two days last semester. They got snacks and ordered tot-filled wraps from Two Fellas and watched. They cuddled with their Marvel blankets, which they have laying on comfy chairs placed beneath a loft bed that they bought so they could have a hangout spot for friends.

“It feels like a prison already. Why not decorate it?” asks France, an employee at Celebration Cinema.

“Your dorm is like your home, so it’s nice to come home and see all of your favorite things,” says Jackson, wearing a Marvel star T-shirt and Wonder Woman socks.

The two talked for weeks straight about superheroes after connecting on the Western Michigan Class of 2020 group website while looking for roommates.

They say the rest is history. Their love for Star Wars, Captain America and binge-watching Netflix shows made them the perfect movie-loving, Marvel-loving duo.

Upon first glance, Room 313 of Davis Hall resembles an office more than a dorm room. No string lights line the perimeter of the space. No posters cover the walls. Furnishings include only a desk, two chairs and a small fridge. The bed is off to one side.

“I like kind of a simple space,” says Kodai Yano, pointing toward his bare dorm room walls. “Usually they (other students) have some lights right here, right?”

Yano, a 22-year-old exchange student from Hitotsubashi University, in Japan, does not consider himself someone very interested in decorating. The lone item adorning his walls, an old Japanese flag, is a gift from the International Office at WMU. Nonetheless, he is proud to have the national symbol on his wall.

“It represents my love for Japan. That’s my background, you know?” Yano says. “You can feel your home much more if you’re out of it.”

What Yano misses most about his home country is the food. Although he admits that he has tried many American dishes, he often prefers to brew Japanese-style miso soup in his room, using a kettle pot, along with some curry rice his parents sent him.

“I tried everything (all types of American food), but Japanese food is much better for me. I brew lots of miso soup because I love it,” Yano says.

Overall, Yano says, he does not mind living in the dorms. He has no complaints about a lack of space.

“In Japan, we didn’t have a big house,” Yano says. “We lived in a kind of small house, so I got used to it. I don’t care about space.”

WMU’s Western Heights residence halls, which are primarily for first-year college students, feel more like deluxe hotels than dorms. Three buildings are organized around central public spaces that connect the buildings on each of four floors. The layout on each floor includes modern furniture, three televisions, a kitchenette and a fenced-in balcony.

Josie Nason, a 19-year-old aviation flight science major, and her roommate, Alexis Kwasniewicz, an 18-year-old occupational therapy major, didn’t have much time to plan a room decor theme before they moved in. It worked out, though, since both arrived with items focused on geography and traversing the globe.

Nason’s decorations, including posters and art pieces depicting planes, are paired with Kwasniewicz’s large cloth world map tacked to a wall. The map’s continents are different colors and patterns, while the oceans hide in the background with a subtle cream hue.

Nason says she received many of her decorations as gifts from family and friends. A thick shaving of wood, a Christmas gift from a friend, hangs above her desk. It’s customized with an engraving of a small plane with the numbers JN110516 — a combination of letters and numbers representing Nason’s birthday last year.

Nason and Kwasniewicz arranged their room to maximize the little space given to them. Their beds are stacked into bunk beds, and a futon is positioned to make that part of the room look like a living room. “It invites people in,” Nason says. ”It gives the room a lot more space so people can come in just to sit and chat.”

Nason describes the room as “fun” because, when the lights turn down, the stars come out. Christmas lights encircle the world map, and a colorful strobe light above the door emits different patterns of brightly colored circles and spirals.

“The other day we turned off all the lights and put the strobe light on and played Mario Kart, so that was fun,” Nason says. “Every time people come in here it is a good time.”

The two residents of a female-floor dorm room in WMU’s Western Heights West hand-painted the inspirational quotes that hang on the walls.

“You are amazing,” says one.

“You are the author of your own life story. So make it a good one,” says another.

Amanda Torello, and her roommate, Sophie Reinhard, spent a weekend painting blank canvases to create artwork for their room.

“I wanted art in the room that was cute and inspirational,” says Torello. “I used Pinterest for most of my decorating ideas, like the color scheme and quotes on the canvas.”

Torello and Reinhard wanted to give their room a consistent theme. Over the summer the two conversed via text message to agree on colors and what each would buy for the room. “I spent most of the summer buying my decorations for the room,” Torello says. “I shopped at Target, T.J. Maxx and Marshalls.”

Bright turquoise feathered rugs are neatly angled on the floor, and the paintings’ color scheme of blues, black and gold adds pops of color to the room’s gray walls.

Torello says the most comfortable spaces in her room are the futon facing the television and her loft bed. She says the blankets on the end of her bed are her favorite things to remind her of home.

However, sharing a tight space with a stranger can be difficult, as generations of college students have learned. “Sharing a room is my least favorite part,” Torello says. 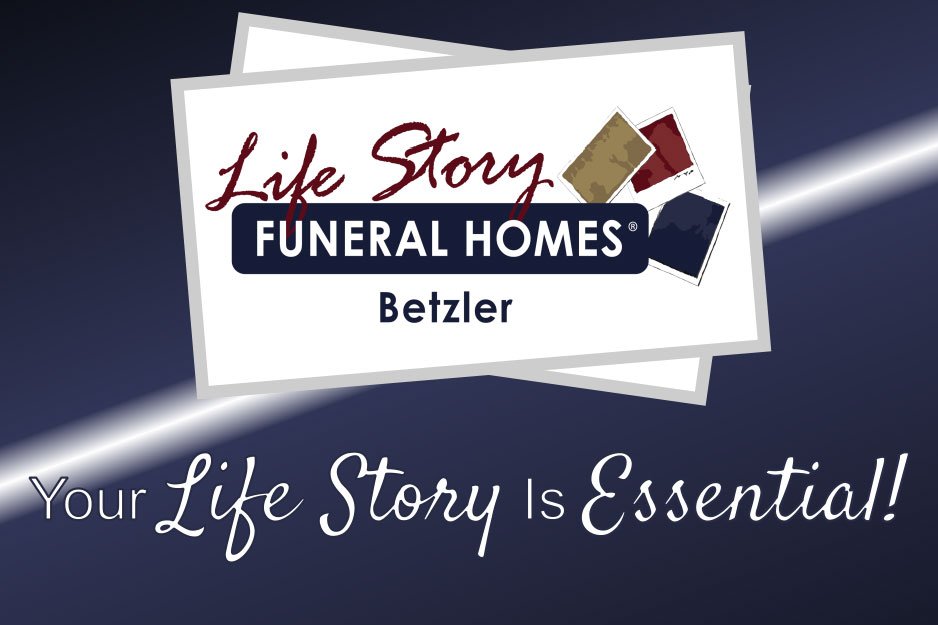 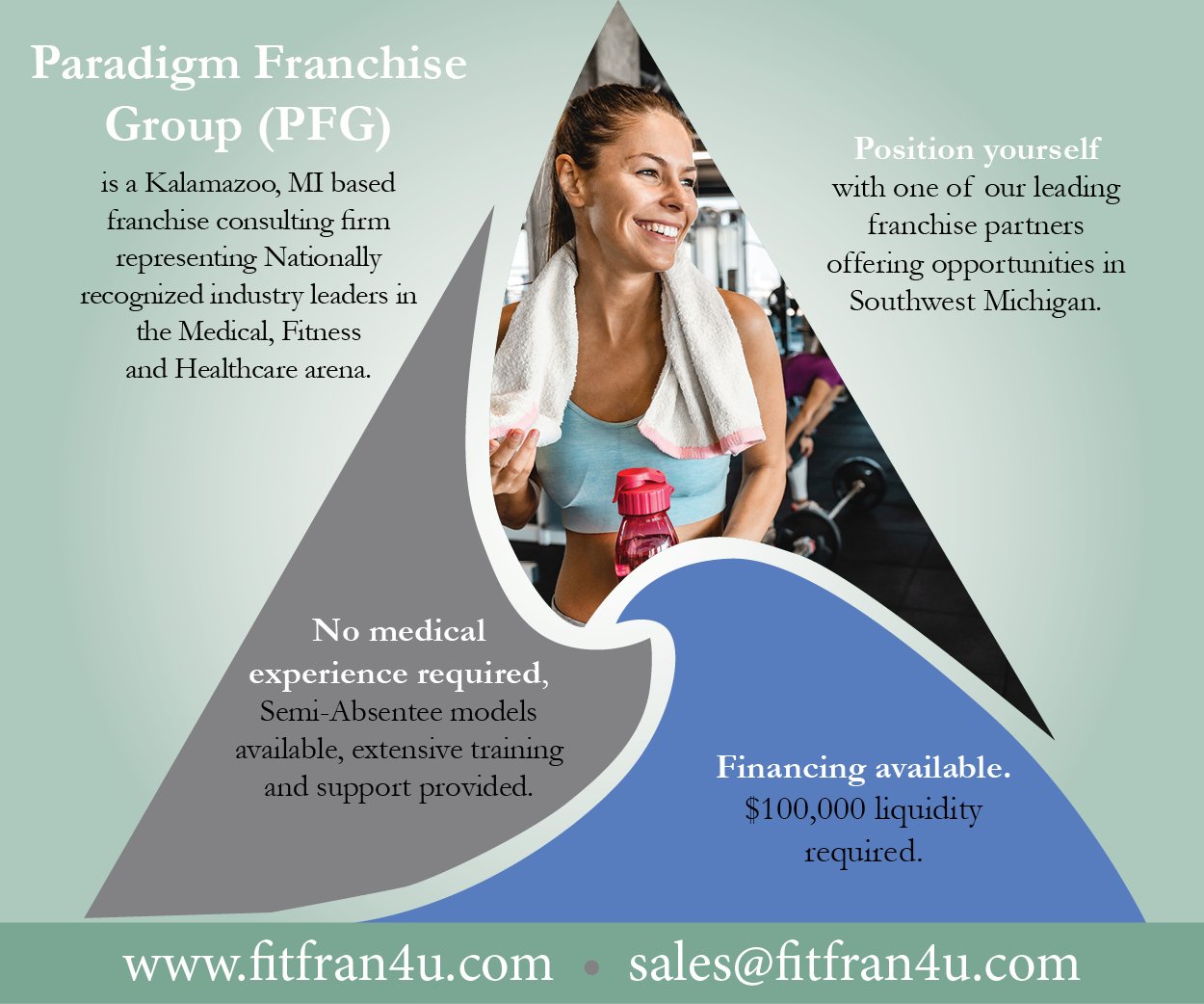 Dorms Then and Now

Students of all gender identities/expressions and sexual orientations have housing choices, including Spectrum House, which is described on the university’s website as “a safe and affirming environment.” And that common laundry room, where a roll of quarters would get you clean underwear for a week? So 20th century. New student housing at the Western View complex offers a stackable washer and dryer and kitchenette in each apartment. 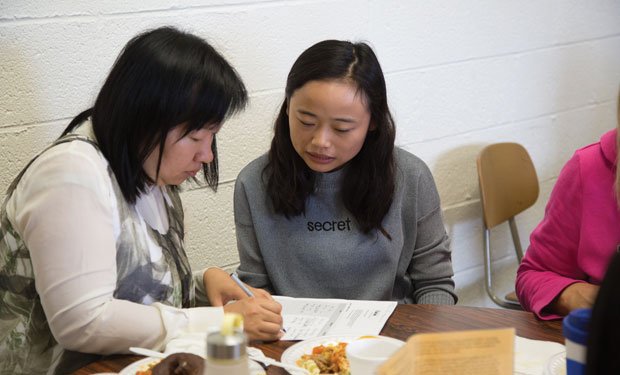 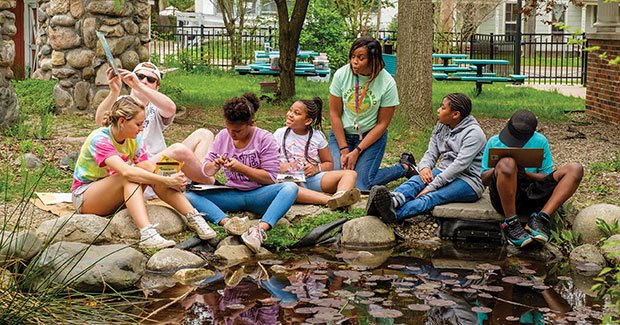 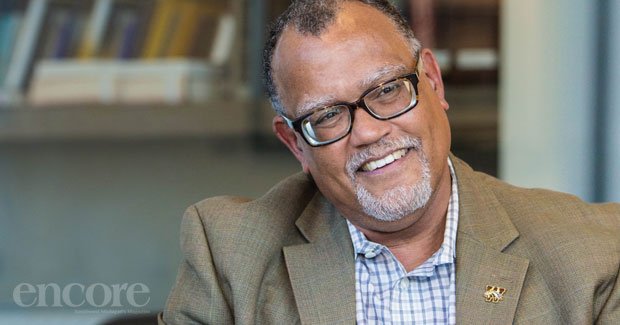