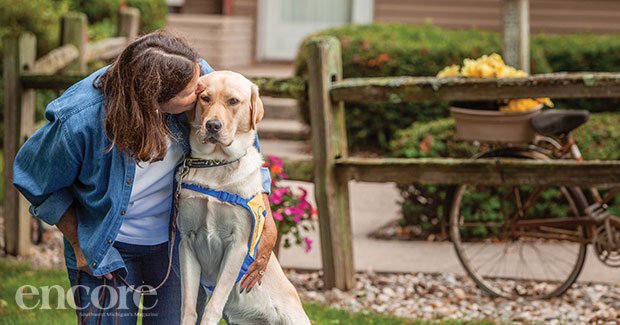 Schroeder kisses Ojala, a 13-year-old golden retriever that she trained but was released from the program for her high energy. © 2019 Encore Publications/Brian Powers
Saying goodbye is often the hardest part of training service dogs

They’re for Schroeder’s sidekick, Gable, a 10-month-old golden Lab. Gable is a student with Canine Companions for Independence (CCI), a nonprofit organization that provides highly trained assistance dogs and ongoing support to people with disabilities. Schroeder brings Gable to the gym as part of that training.

Those big shoes — or paws, rather — belong to Schroeder’s previous student, 2½-year-old Elvis. In January, Schroeder, who’d had the black Lab/retriever mix since he was 8 weeks old, dropped Elvis off at CCI’s regional training center in Delaware, Ohio, for advanced training. Leaving Elvis was hard, to say the least, but Schroeder knows, as a puppy raiser, that saying goodbye comes with the territory. Back in 1995, her family experienced their first heartbreak after dropping off Imke.

“We cried the five hours (coming) home from Ohio,” Schroeder says, “and I said in the car, ‘You know, this was a wonderful experience, but I don’t think we need to do this again.’ Well, then we got a call.”

That call came from CCI. The organization needed the Schroeders’ help raising puppies. Now, 20 dogs later — the 21st will be arriving soon — Schroeder and her husband, Randy, can’t imagine not serving as puppy raisers.

Schroeder got hooked on raising puppies for two reasons: She enjoys loving, teaching and watching a puppy grow into a happy, well-behaved young dog, and — if the dog graduates from CCI — seeing that it will positively affect someone’s life.

“Being a small part in that dog’s success in helping someone live a more independent life is immeasurable,” she says.

This passion for raising service dogs began when Schroeder’s then-13-year-old daughter, Rebecca (now Rebecca Swallow), wanted to enter a 4-H dog care project working with service dogs. They contacted CCI and went through its extensive application process. After they were approved, 8-week-old Imke entered their lives and launched the Schroeder family on a lifelong mission.

Schroeder receives puppies from CCI’s national headquarters in Santa Rosa, California. CCI breeds puppies for temperament and health. In one calendar year there may be more than 800 puppies in the training process, Schroeder says, and an elaborate bookkeeping system tracks each dog and records things like hip dysplasia, joint issues and temperament concerns.

“They’re tattooed in their ears in sequential number order,” Schroeder says, flipping back Gable’s ear to show his number. “The first two numbers correspond to the year he was born — 18 — and then 657: He was the 657th puppy born in 2018.”

Every CCI puppy raiser uses the same commands and words in the same context to ensure that everyone is on the same page when the puppy arrives at regional headquarters for advanced training. For instance, the word “down” means “lie on the floor,” rather than “don’t jump on me.”

Puppy raisers receive a CCI manual of commands to teach the dog when the dog is 3 to 6 months old, 6 to 9 months old, 9 to 12 months old, and so on. But after 25 years of doing the training, Schroeder admits she improvises. For instance, she will teach a puppy to stand on command earlier rather than later.

“A puppy is not going to sit very long,” she explains. “What’s he going to do? He’s going to stand up. So I put a command with that (when the puppy stands).”

Schroeder likens raising an assistance dog to building a home: It takes creating a strong foundation on which to build. Not only does this require teaching basics in obedience, she says, but it also means giving the animals love (“the easy part”) and instilling self-confidence in them by exposing the puppies to age-appropriate stimulation through public outings.

“Puppy raisers owe a debt of gratitude to business owners who welcome us into their establishments to essentially train our pups,” she says. “Without that exposure in restaurants, medical offices, schools, churches, exercise facilities, retail stores, etc., these pups in training would lack the experience and confidence necessary to behave appropriately in all situations as a graduate dog.”

CCI, started in 1975, trains four types of assistance dogs: service dogs, hearing dogs, facility dogs and skilled companion dogs. Service dogs are partnered with adults with physical disabilities and perform tasks such as pulling a wheelchair, pushing elevator buttons and assisting with transactions like transferring money, receipts and packages. Hearing dogs are specifically trained to alert the recipient to key sounds such as doorbells, telephones, and alarm clock and smoke alarms. Skilled companion dogs work with a child or an adult with a disability under the guidance of a facilitator like a parent, spouse or caregiver who handles and cares for the dog. Facility dogs are trained to work in health-care, visitation or education settings.

Swallow (Schroeder’s daughter), a speech and language pathologist at Jennings Elementary School in Quincy, Michigan, graduated from CCI with her own facility dog, a black Lab named Melia. She utilizes Melia in many ways, including to offer a calm and fun atmosphere for students working on their speech and language skills. Some of the children also have behavioral issues, Schroeder explains, and Melia’s presence helps redirect the kids’ focus to the tasks they are asked to do.

“Becky also uses Melia to help students working on specific sounds and speech patterns,” Schroeder says. “Kids can command Melia to do a particular task if that command word contains the sound being worked on.”

CCI always uses golden retrievers, Labrador retrievers or an intentional cross between the two, she says, even though there are certainly other breeds smart enough to learn the work, such as German shepherds, Belgian Malinois and Dobermans. But retrievers are better accepted by the public, she says.

“We want the recipient of our dogs to be fully integrated into the general public,” Schroeder says. “People consider them (retrievers) friendlier-looking.”

Once a dog such as Elvis is dropped off at regional headquarters, its training isn’t finished; it has only begun. For the next six to nine months, the dog will undergo advanced training.

“They’re taught to do the light switches, elevator buttons (and) taking clothes out of the dryer, putting clothes in the basket, dragging the basket to where (their companion) needs it, or holding onto their sleeve so they can pull their arm out,” Schroeder says.

Only about 50 percent of the dogs graduate from the advanced training, she says.

“We were naïve enough to think that all the dogs graduated because our first dog made it,” she says.

Puppy raisers get the first option to take these dogs back as a pet, Schroeder says, Otherwise the dogs are adopted by well-screened applicants. The Schroeders have opted to take dogs back, such as Ojala, their now-13-year-old golden retriever, who was released from the program due to her high energy. But she still has a service role.

“She has played the role of “grandma” to the nine pups that have come into our home (after her) and counting,” Schroeder says.

If three months pass after dropping off a dog, it’s a “hold your breath” moment in training, Schroeder says. At this point, the CCI trainer will increase expectations of the dog while backing off of the rewards given to the dog for performing advanced commands.

“Some dogs don’t like the increased intensity of their training, and it will manifest itself in some unacceptable behavior,” Schroeder explains. “The dogs are not forced to work if they are unhappy. The choice is theirs.”

One of the dogs might figure out a person’s weakness and have a “maybe I’ll do it and maybe I won’t” attitude, Schroeder says, while another dog will respond immediately. After dogs and recipients are permanently matched up, CCI holds a graduation ceremony.

“If you’re lucky enough to have a graduate dog, you have brunch with the person or family receiving your dog,” she says.

The recipients have the option of keeping in contact with their puppy raiser. So far, each person receiving one of Schroeder’s dogs has kept in touch with her family. She talks with them regularly, has attended weddings, and even dog-sits if needed.

After brunch with the recipient, Schroeder says her final goodbye.

“You have 20 minutes with your dog to hug on them and take pictures and get all emotional,” she says.

Then the ceremony begins, such as the one the Schroeders attended Aug. 9 when Elvis graduated. Each recipient is called to the stage. “You bring your dog up there and hand over the leash,” Schroeder says. Although it’s difficult to let go, meeting the recipients and discovering how the dogs make such a difference in their daily lives provide great reward, she says.

“That’s what gives you the incentive to keep doing it,” Schroeder says.

Helping others be more independent

“Being a small part in that dog’s success in helping someone live a more independent life is immeasurable.” 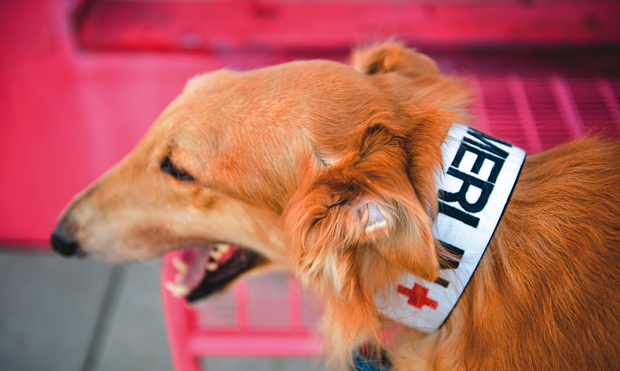 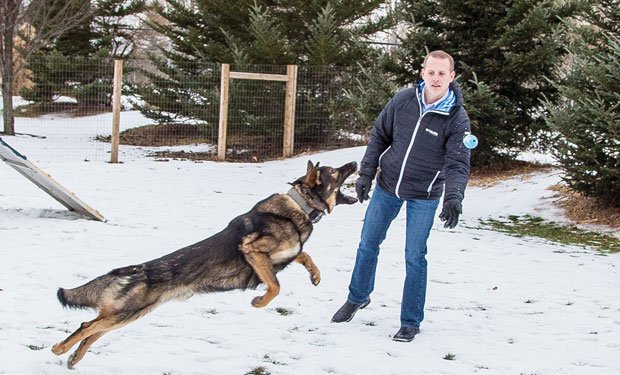