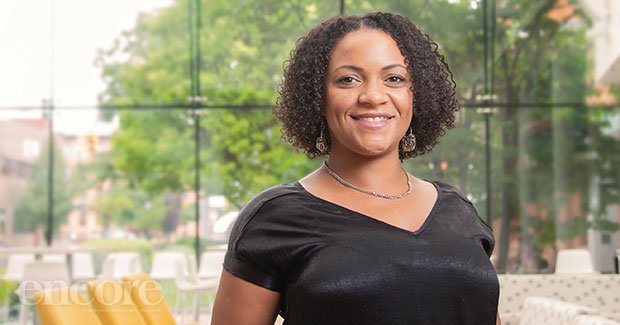 In 2016, the Kalamazoo Community Foundation was chosen as one of 14 national sites to implement the W.K. Kellogg Foundation’s Truth, Racial Healing and Transformation (TRHT) initiative, which aims to bring about community change by advancing racial healing and addressing the historic and contemporary effects of racism.

Stepping up to lead this complex, important and daunting task was Sholanna Lewis, who was formerly part of the foundation’s grantmaking team. Lewis, 31, was born in Kalamazoo but grew up in Texas and attended college at the University of Southern California. She returned to Kalamazoo after college and began working for the Arcus Center for Social Justice Leadership at Kalamazoo College, where she served as the center manager, but her interest in social justice began as a child.

“My mom was really big on pushing that narrative of ‘question everything,’ teaching me critical thinking from a young age and to explore different cultures and to question rules and policies,” Lewis says. “Being biracial, I saw firsthand the things that my white family members did or got away with and what was normal to them. Then I moved to live with my sister in Houston, and it was eye-opening to go from being the only black person around for miles to living in one of the most diverse cities in the United States. It really shaped my perspective on the world we live in and stirred my interest in doing social change work.”

One outcome of TRHT Kalamazoo’s work so far is its Historical and Cultural Landscape Project, whose goal is to tell a history of Kalamazoo that focuses on injustices, cultural empowerment and resistance to racism. The project seeks to create a shared understanding of local history through archival research and community stories, ultimately creating educational resources, art, monuments and informational landmarks throughout the Kalamazoo community that reflect an inclusive history.

What does your position entail?

TRHT is intended to be collaborative. There are people and organizations in Kalamazoo that have been doing healing work but not necessarily working together and seeing what it would mean to transform on the community level. I think there are plenty of people who have thought about this, but I think that none of them were positioned to actually implement some of those ideas.

TRHT is a framework to build relationships and create spaces for dialogues that will then spark the change we want to see. A lot of what I do is listen to people and try to integrate ideas and then bring those folks and more people to the table to implement different projects. I try not to make many decisions on my own. I think that’s really important.

What is the focus of TRHT Kalamazoo?

The five areas we work on are racial healing, narrative, changing laws and public policy, economy, and separation. It’s interesting how much these areas overlap. For example, separation is about how people are kept separate and why, and it includes housing, education and health care. People experience separation in those areas of life, but it’s all rooted in existing systems, policies and ways of doing things.

Explain the concept of racial healing.

Healing has to operate at multiple levels. There’s the dealing with the inner self, what we believe about ourselves and internalized racism, whether it’s internalized superiority or internalized inferiority. For example, I’ve asked myself when I’m around white people, “Do I silence myself? Do I believe subconsciously or consciously that if I raise my voice or speak out that I will be ignored, punished, etc.? Am I dealing with past trauma of being silenced or receiving retribution because I spoke out and now I think the same thing is going to happen?”

We have to address the same thing with white people. They need to ask, “Do I dismiss this person and what they’re saying because they’re a person of color? Am I afraid of this black person because they’re black or is there something real there?”

These are things we have to explore within ourselves.

Healing also has to focus on interpersonal relationships and having a shared understanding of our humanity and feeling connected to each other more. It’s hard because people find safety in familiarity and having similar life experiences and culture. How do we bridge that? It’s changing belief systems, which is way harder than some policy change, you know?

What’s the biggest challenge you have overcome?

Fear. We started this in 2016, and you know what else happened in 2016? An uptick in hate crimes. I’ve known people who’ve gotten death threats because they spoke out and tried to do this work. There’s fear of retaliation, of pushback, of repercussions for challenging things. There’s an understanding amongst folks who’ve been doing this work a long time that if people aren’t mad, then you’re not getting at the real problem. I challenge myself every day to not let that fear hold me back and to keep getting at the real problem.

For more information on Truth, Racial Healing and Transformation Kalamazoo, visit trhtkzoo.org. To keep up to date on the initiative’s events and activities, visit TRHT’s Facebook page at facebook.com/TRHTKalamazoo.