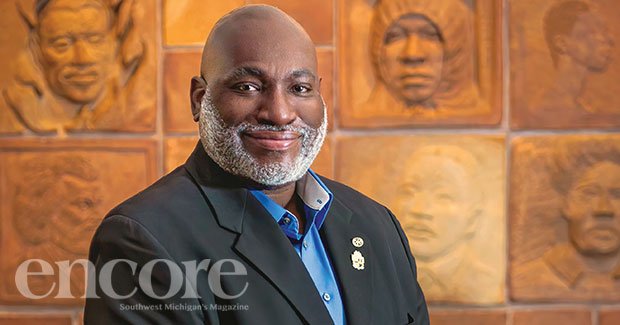 A couple of times Kalamazoo has come very close to losing Sid Ellis, one of its longtime arts advocates and community servants.

In the mid-1980s, the Davenport University graduate had his car packed and ready to drive to Texas, where there was a big boom in jobs. “I was literally putting my suitcase in the car and got a phone call,” he recalls. That call was for a job as an operator at AT&T (then Michigan Bell) in Kalamazoo, which he ultimately took.

The second time, he left Kalamazoo for Chicago to begin a career as an extra in television commercials. “I was in the car driving there, and I felt that God was telling me not to. And I turned around and came back,” he says. “That’s when I started producing more stage theater. And then I got married, and 27 years and two kids later, I’m still here. Every time I tried to leave Kalamazoo, something great happened.”

Ellis’ long career in Kalamazoo has had a strong base in the arts. The Detroit native began acting in local productions and discovered puppeteering and storytelling. He produced his own show on what is now Public Media Network called Try God’s Love, which he describes as “a Christian Carol Burnett Show.” In 2008, he became the first full-time paid executive director of the Black Arts & Cultural Center, where he worked until 2014. He left that organization to head Colleagues International, which hosts international visitors from a broad range of fields, and then became the director of mission advancement at the YMCA of Greater Kalamazoo.

In 2019, he took the helm of the Douglass Community Association, a century-old organization that serves as a center for social, recreational and community development activities for residents of Kalamazoo’s Northside neighborhood.

I am a connector. I connect people to people, people to organizations, and organizations to people. I do fundraising fund development, which I call “friend-raising.” I’m also the face of the organization. I’m out doing things, trying to collaborate with organizations and trying to bring organizations here to do a variety of different things. It’s all about serving the people and making sure that those under me have all the tools that they need to do what they have to do.

How do you describe the Douglass Community Association to someone unfamiliar with it?

The Douglass Community Association is a hub of community services for the Northside population and the surrounding areas, so any and everyone in Kalamazoo, of course. We have more than 16 organizations and programs that are either housed or hosted at our center, including the Alma Powell Branch of the Kalamazoo Public Library; Boys and Girls Club of Greater Kalamazoo; the NAACP; Northside Preschool Organization, which assists parents with getting their kids into preschools; Michigan Works! (offering employment support services); the Momentum program (offering training in life skills and employment readiness); Rootead (a program addressing birth justice and body awareness for women); and Loaves & Fishes (feeding the hungry).

We’re a one-stop shop for a variety of social needs for the community — you can come here for one thing and you can find another. You can come to the library and see we’ve got the Boys and Girls Club, so maybe your kids can come to that. You can go to Loaves & Fishes and see that we have the public library here. It’s easily accessible to the Northside community — people can walk here, which is very convenient. We have a very friendly, family-oriented atmosphere. We make people comfortable.

You want to make them feel good about coming here.

You have an extensive background and obvious passion for the arts, so what drew you to this job?

I’m a servant of the community and have been since the mid-1980s, when I started volunteering and helping a variety of different organizations. I became a mentor and was until last year, when I decided for my son’s senior year I would commit to mentoring him. Wherever there was a need, if I could fill it, I did, whether it was helping to set up chairs or cleaning up areas or working in the children’s ministry at church. I just always loved serving people.

How does your background in the arts intersect with your position at the Douglass?

It’s made me a better speaker and better at communicating with people to tell the story of the Douglass and what we’re doing, as well as what the other organizations that are here are doing. We are also connected to the arts here. We’ve had the Kalamazoo Civic Theatre come do workshops, and when I was with the Black Arts & Cultural Center, I came here and hosted workshops on a variety of different things.

How do you feed your artistic soul?

I’m involved in All Ears Theatre (a radio theater program) and usually act in and direct at least one play with them each year. I performed in Gem of the Ocean with Western Michigan University’s theater department in 2019, and I’m a member of its Theatre Guild, which assists students who have financial issues. I also serve on the board of the Kalamazoo Civic Theatre.

What makes you the most happy?

Of course, my wife wants me to say her and my boys (who are 22 and 18). (He chuckles.) But, you know, I’m 57 years old and I’m really enjoying life. And I’m very happy with where I’m at in terms of a job and career. I’m where I’m supposed to be, doing what I’m supposed to do. I enjoy life. I enjoy being around people. Just living life makes me happy.

It’s easily accessible to the Northside community — people can walk here, which is very convenient. We have a very friendly, family-oriented atmosphere. We make people comfortable. You want to make them feel good about coming here.