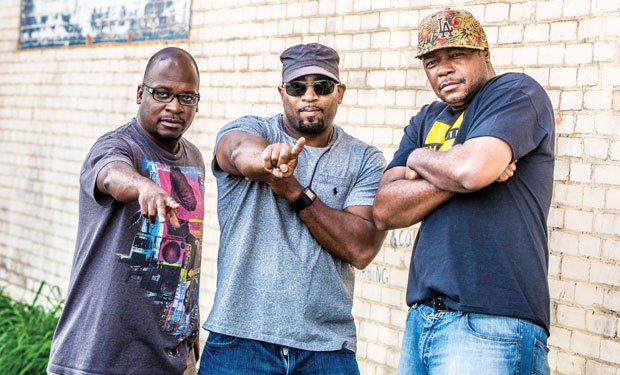 From left, hip-hop band Dezert Eez members O’Nill, Nivek and 5-Star have been recording and performing together for 15 years. Photo by Brian Powers
Kalamazoo hip-hop artists promote music to the world

Kalamazoo may not have the same name recognition as Compton, California, or the Bronx, New York, but rappers here have the same goals as artists from those bastions of hip-hop.

“Our beats are able to reach people outside of Kalamazoo. That’s the power of the Internet — it helps us get our names out,” says Billy Parr, 28, of Kalamazoo. He and his business partner, Matt Rankin, 27, own and operate Synergy Productions, a Kalamazoo music production company, and Pro Circle, a record label for local hip-hop musicians.

Although some music scholars might disagree, for many people hip-hop and rap are the same kind of music — rhymes spoken over instrumental sounds often taken from previously recorded songs. The majority of hip-hop artists are African-American, though a few famous ones are white, like the members of Beastie Boys and Michigan’s own Eminem. Race and culture are as important as the beats themselves in hip-hop, says Skitzo (real name: Trevon Hobson), a Kalamazoo musician who performed on tour around the U.S. this past summer. Last month he returned to Kalamazoo as a special guest performer with rapper TECH N9NE for a show at the State Theatre.

“Poverty, classism — these are worldwide problems,” Skitzo says. “I want people to understand where I’m coming from.”

Kalamazoo and its performing venues host a variety of musical styles, from classical performances to indie rock bands and blues musicians. While hip-hop musicians do perform in Kalamazoo, specifically at Bell’s Eccentric Cafe and the State Theatre, Kalamazoo isn’t known for its vivid rap music scene.

“It’s a college town. People trying to make music are only here for four or five years,” Rankin says.

Shannon DeVries, talent and production manager at Kalamazoo’s State Theatre, says Kalamazoo is considered a small market in terms of concert promotion. (The big markets in the state are Detroit and Grand Rapids.) That makes it less appealing to musicians looking for places to play where they can sell a lot of concert tickets, albums and merchandise like T-shirts.

Also, there hasn’t been as much of a call for hip-hop acts from local audiences, says DeVries, though she’s trying to change that.

“For a long time, classic rock was what we were bringing to Kalamazoo, but we’re taking the initiative to reach out to other genres of music,” she says. “It’s important that we give local talent a place to perform.”

Mike Williams, aka 5-Star, from the Kalamazoo-based group Dezert Eez, says his group has played in Southwest Michigan but is more often headed to bigger cities like Detroit, Chicago and Indianapolis, where he says there’s a larger audience for hip-hop.

The group has been together for 15 years. Williams and his two partners, Nivek (Kevin Williams) and O’Nill (Ron Mosley), started performing together as students at Western Michigan University before being discovered by New York City-based hip-hop group Wu-Tang Clan.

“(Wu-Tang Clan) has been super-influential to us,” Willams says. “They opened us up to their fan base.”

He says Dezert Eez has used public relations companies in the past to promote its albums, with the focus on online publicity through such hip-hop-centric websites as Hot New Hip Hop (hotnewhiphop.com). But Dezert Eez albums can be found in Kalamazoo record stores like Green Light Music, too. Online publicity and a history of listening to rap is what brings an audience to hip-hop shows, Williams says.

“When we are on tour in a university town, 75 percent of the audience is from the university,” he says. “A lot of people are searching for good hip-hop.”

Parr and Rankin also rely on the Internet to promote their music. Synergy Productions “samples” songs. Using existing recordings from other musicians, they take a small selection of notes from different songs and blend them together into something new. That background sound is offered to rappers, who add their own vocals to make a complete song.

Dezert Eez, Synergy Productions and Skitzo can all be found on Soundcloud (soundcloud.com), where listeners can hear entire songs by the artists for free. Williams says the Internet has made listening to music so cheap that Dezert Eez isn’t counting on songs to pay their production costs.

“We’re big into the merch (merchandise) game,” he says. “We give away songs with T-shirts and wristbands. The music you can file share so easily. We have to do something else.”

Skitzo is a full-time musician, but the others have jobs outside the hip-hop realm: Williams is a mortgage consultant; Rankin works at a bank; Parr works in insurance.

Music and the message

Even a casual fan can identify two major subjects of most hip-hop music: the “gangsta” lifestyle of flashy clothes and violence, and “conscious” hip-hop, with lyrics about social and political issues like racism and crime. Rankin says he’s heard songs from both ends of that spectrum and everywhere in between, though he prefers songs that are more concerned with his own experiences.

“We want to put out the positive message about the grind of being in the music business,” he says. “But everyone has a different story, a different life, something we can learn from.”

Skitzo says he’s a little discouraged by some of the young musicians he has met who are more interested in image than effort.

“There’s a lot that is influenced by drug rap culture,” he says. “There’s not a lot of teamwork that makes the dream work.”

He says writing lyrics and taking part in “blaze battles” — performances at which rappers trade rhymes, making fun of one another, and the winner is the one with the best sound and the best insults — is part of building a career as a hip-hop artist. But promoting the music and a positive message, on stage and online, is the route to success, he says.

The pulse of the youth

“When we are on tour in a university town, 75 percent of the audience is from the university. A lot of people are searching for good hip-hop.”