The Attention of Nidal Awad 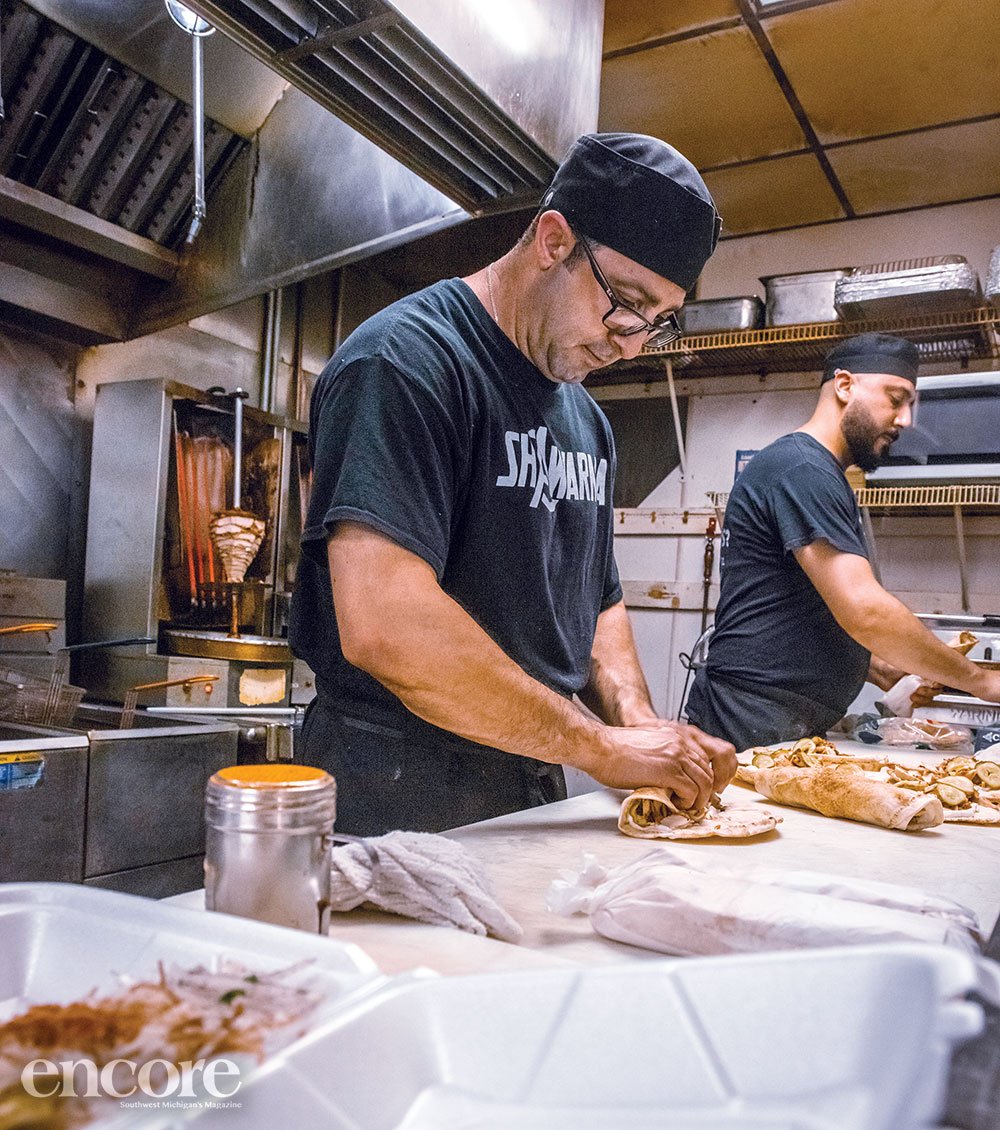 Chef Nidal Awad and employee Shadi Awad prepare an order.
He gives it to his restaurant & customers and the result is delicious

It was 20 years ago in September that Chef Nidal Awad, with a 21-year-old’s optimism and faith in the opportunity offered in the U.S., traveled from Palestine, following his brother to Kalamazoo. His first job was as a dishwasher at Shawarma King on Drake, the restaurant he now owns.

The restaurant’s staff of 35 represents 15 nationalities, and Awad is proud of the diversity. “I don’t care where you are from, what color you are, where you worship. I care about you being part of this family,” he says, adding his staff includes 10 family members: nieces, nephews, sons and brothers.

“They’re the ones that drive me crazy,” he says, laughing and adding that when many of his family members started working as young teens, they would tell him he was mean.

“You know teenagers — they may not want to smile, they might want to visit in the kitchen or look at their phones. Not here,” he says.

The busy swirl of phone calls, order pickups and dishes heading to the restaurant’s small dining room shows Awad’s commitment to service and hospitality, an attitude that starts with his relentless smile and personal greeting to every diner at some point during their visit. His love of good food comes from his homeland. Growing up in a large family, he attended high school in Ramallah, continuing his education at St. George’s College in Jerusalem, where he also worked as a dishwasher and prep cook for the school’s food service.

“I’d peel the onions, cook the chickens, anything and everything,” he says. The college sponsored him to attend culinary school in Jerusalem, where, he reports, he graduated top in his class. He added further study at Al Quds University in Ramallah and volunteer service at restaurants where he admired the chefs.

“I begged them to let me work and learn. Of course, they abused me relentlessly,” he says, alluding to the rapid-fire training found in busy kitchens. Once in the U.S., though, Awad had to start back at the beginning.

“The first six months were hard,” he recalls. “I was homesick, wondering ‘What did I do?’ I was having to start over as a dishwasher earning $6 an hour.”

The restaurant enjoys an average of five stars from 3,500 reviews on GrubHub, with complaints primarily referring to delivery issues. Awad credits enthusiastic fans on the Facebook Kalamazoo Menu page (37,000 members), launched during the pandemic to support local restaurants, with helping Shawarma King survive when business dropped by 40 percent in 2020.

“That was a near-disaster, but no one was laid off,” he says. “If this was in a different city, I don’t know if that would have happened. Our customers are amazing.”

The feeling seems to be mutual. During our interview, Awad is interrupted by a midafternoon diner wanting to introduce out-of-town friends who, she says, “insisted on coming back here because they loved it so much last time. We shared the King Platter — except for the kibbe, because I don’t share that,” she adds, laughing. “It was so good.”

Awad works seven days a week, though sometimes he gets away from the restaurant. In 2021, he was invited to host a “Cooking at Home” class sponsored by Kalamazoo College’s Office of Intercultural Student Life. He presented it online from his home kitchen. He has been a guest instructor with Kalamazoo Valley Community College’s culinary program and in 2019 shared his background and love of food with patrons of the Oshtemo Branch of the Kalamazoo Public Library. Soon after, Marcellus Township Librarian Christine Nofsinger invited Awad to visit the small rural community southwest of Kalamazoo.

“It was a time when it seemed like we needed to do everything we could to foster relationships between people who look different from each other and come from different backgrounds,” Nofsinger says, noting there was a big turnout for Awad’s presentation. “He was a fantastic guest. He talked about his culture and upbringing and brought food to share.”

Occasionally Awad ventures into new culinary territory, such as serving chicken sandwiches rolled in crushed Hot CheetosTM or spicy TakiTM chips. In 2020, he partnered with Shawarma King’s parking-lot neighbor Roma’s Pizza to create a chicken shawarma pizza with pickles and garlic sauce. These days the pizza is just an occasional special, says Roma’s owner, Nick Thiele, who has been friends with Awad since he was a Roma’s delivery driver and Awad was a dishwasher.

“He’s inspiring because he works so hard,” says Thiele of Awad. “I get a lot of ideas from him, and he gets ideas from other people and shares them with me. He’s just a great person, someone I love being around. He encourages me for anything I want to do, saying, ‘You can do it, I’ll help you, let’s go!’ He knows how to treat people. The food is delicious, but the attention he gives to people is why he’s so successful.”

There were certainly times for Awad when success seemed far off and he worried about paying the mortgage on the home he shares with his wife, Nour, and their five children — the oldest of whom, Nala, just graduated as valedictorian from Kalamazoo Central High School and attends Kalamazoo College.

“I am a tough guy, but there were lots of days I would cry wondering how I would pay my employees,” he recalls.

Even with the stress of running his own business, Awad is grateful for all it has brought him.

“This is not about how smart I am. I come in the morning and feel like this is a dream. I came from a poor family and never expected I could live a good life, surrounded by good people and a great community. This life is like this chain,” he says, indicating his necklace. “Everybody needs everybody — giving the best of you will come back to you. Life is not about money.

“Trust me, I want to be sitting here enjoying my lunch and doing whatever I want, but I have to take care of my employees, my family and my community.”

Note: Awad’s restaurant is unrelated to the Shawarma King on South Westnedge Avenue. 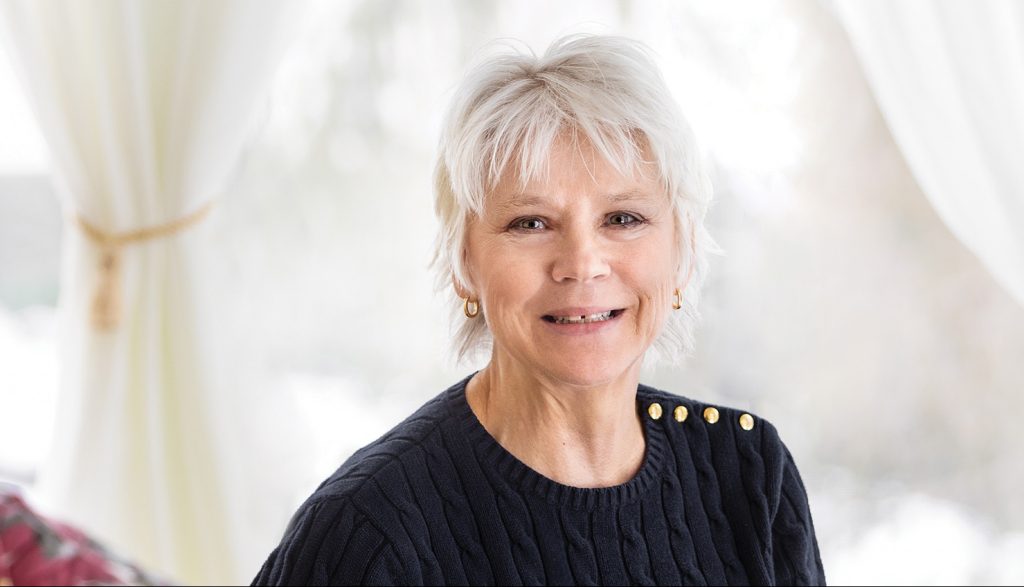