The Lively World of Dying 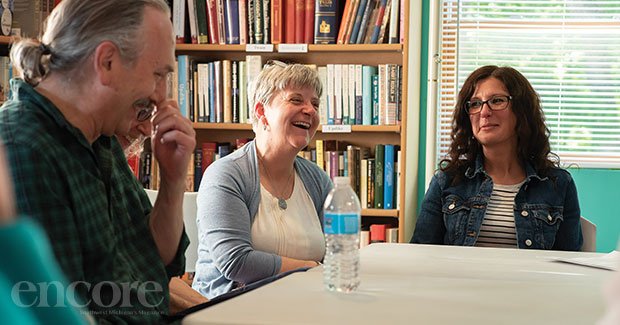 How often do you think about your own death? Unless you’ve been recently diagnosed with a fatal or potentially fatal disease, it’s safe to assume not often. Death Cafe Kalamazoo would like to change that. By offering discussions on the taboo topic of death without judgment of people’s beliefs, the monthly Death Cafe offers a space for people to come to terms with our collective and inevitable fate.

But if the name Death Cafe brings to mind a group of terrifyingly gaunt people clad in funeral blacks huddled in the dark, or shades of the movie Harold and Maude, you’d be surprised by what you’ll find the fourth Wednesday night of every month in The Annex at Kazoo Books.

Each Death Cafe meeting is unique. Over the course of two hours, the group might discuss everything from statistics about burial (in one year, the amount of embalming fluid used in the U.S. alone could fill an Olympic-sized swimming pool) to the rise of end-of-life doulas (people who advocate for the needs and wishes of the dying and help loved ones through the process as well) to how, with the industrialization of death and burials, our culture has become disconnected from the circle of life. Attendees laugh and contemplate. Many partings end with a hug.

“That’s an aspect of the Death Cafes that I didn’t expect — people are excited to be there and it is often a really fun, lively, humorous atmosphere. People are just really stoked to be there and get this out,” says one of Death Cafe Kalamazoo’s three facilitators, Alycia Lee.

The birth of Death Cafes

Death Cafes are held in 65 countries around the world with one purpose: to increase death awareness. The meetings are not meant to persuade people to believe or disbelieve in an afterlife or religion or to choose one form of burial over another. They are certainly not grief counseling, though many attendees leave feeling lighter, says Lee.

Death Cafes — or cafés mortels in French — were created by Swiss sociologist Bernard Crettaz following a Swiss tradition of science and philosophy cafés, where people gather at a local bar or cafe to eat, drink and talk about science or philosophy and expand their minds. After reading about Crettaz’s Death Cafes, Jon Underwood, a British web designer, created a website and held London’s first Death Cafe in 2011. The website (deathcafe.com) includes history, a map of past and upcoming Death Cafes around the world, guidelines and reading material.

Underwood, who died in 2017, wanted the cafes to facilitate open conversation, encouraging people to live with intention because our time here is finite.

“If you can live knowing that you’re going to die and be okay with it, you will live in a more actualized way,” says co-facilitator Sarah Field.

Death Cafe Kalamazoo began meeting in early 2018, organized by Field, Lee and Janice Marsh-Prelesnik. Each of the facilitators has had her own encounters with death that set her on a course to dig a little deeper into the lively world of death. Marsh-Prelesnik grew up on a farm, she says, which surrounded her with death early on. Lee witnessed a couple of impactful animal deaths and recently lost a friend to cancer as well. When Field was a teenager, her infant niece died suddenly. Later in life, Field experienced the peaceful death of her father from cancer.

“Death, I think it carved me out pretty deep at a young age,” Field says, “which, you know, it’s so funny and cliché about the things in life that are the most traumatic or the most difficult, how they are the most formative.”

Besides co-facilitating Death Cafe Kalamazoo, Field studies death psychology at a university in Santa Barbara, California, and is currently in the process of forming a nonprofit called Death in Company, which will serve as a database for end-of-life, burial and funeral services. In her study of death psychology, Field has found that people’s unconscious fear of death fuels other fears and anxieties.

“Death is like a huge, huge part of what motivates us or shuts us down unconsciously,” she says, “especially in this culture, because nobody wants to deal with it. We’ve lost all connection with the natural ways that we acknowledge death.”

While Field was living in Santa Barbara, a friend took her to her first Death Cafe, and after she moved back to Kalamazoo, Field attended a Death Cafe in Ann Arbor with Lee, with whom she has been friends for years.

“It’s some of the most candid conversations I’ve had,” Lee says. “There just aren’t too many times in life I feel a comfort level talking with a group like that. We try to say that it’s not therapy, but we all come away from it feeling like it is, just because we feel a sense of relief about some of the ideas and questions that we’ve had. It’s very spiritually satisfying.”

Field says the Death Cafes remind us of who we are as humans. “The human body is not disgusting,” she says. “Death is not — I mean, it is morbid, but being interested in death is not dark or dirty. It’s trying to re-naturalize it so we can remember what we really are. We’re just like animals.”

Lee, who is a part-time yoga instructor and certified in green burial and home funeral practices, says our culture currently relegates end-of-life care to the funeral and hospice industries, but she sees potential for families to return to having home funerals, which were the norm in the United States until around the time of the Civil War and continued in some families until the middle of the 20th century. Home funerals would give families more say in the process of burying a loved one, Lee says.

“There’s so much room for improvement on how we do end of life in this culture,” she says.

“I think there’s a lot of other aspects that could be brought into supporting families,” Marsh-Prelesnik says.

Marsh-Prelesnik, who was Lee’s midwife for the birth of her two daughters, was also intrigued when she heard about Death Cafes from Lee. Marsh-Prelesnik saw the gatherings as an opportunity to educate people on their options for end-of-life care. Having spent 36 years practicing midwifery, she switched gears 13 years ago to focus on the end of life. She started volunteering with hospice care through Ascension Borgess Hospital and eventually started expressive arts therapy for those in hospice and nursing homes, which she still conducts.

“(Death is) a huge time of growth for the family and the people and the caretakers and you learn a lot,” says Marsh-Prelesnik. “I feel like if you don’t understand birth and death that you don’t really understand life. You’re missing a huge part of it.”

About four years ago, she branched out into providing end-of-life-doula services. An end-of-life doula helps support a dying person in that person’s last few months of life as well as their family. You do not need to be certified to be a practicing end-of-life doula, but Marsh-Prelesnik says that in her expressive arts therapy and her end-of-life doula work, she applies the same concepts she learned throughout her 30 years as a midwife.

“It’s really about the skill of just sitting quietly,” she says, “being with a person and letting their process unfold, offering support as needed.

“I think a lot of the depression that people are having — people have always been depressed, but what I’ve noticed is that people don’t even want to think about that deep emotional stuff. If they understood more about the struggle of getting born, the struggle of dying, maybe they wouldn’t be so afraid of the struggle in the middle. Life is struggle sometimes. It just is. And so what?” 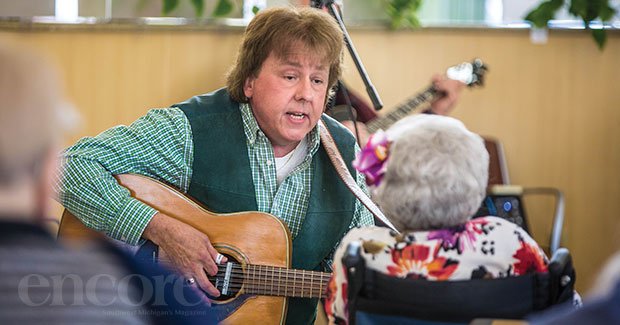