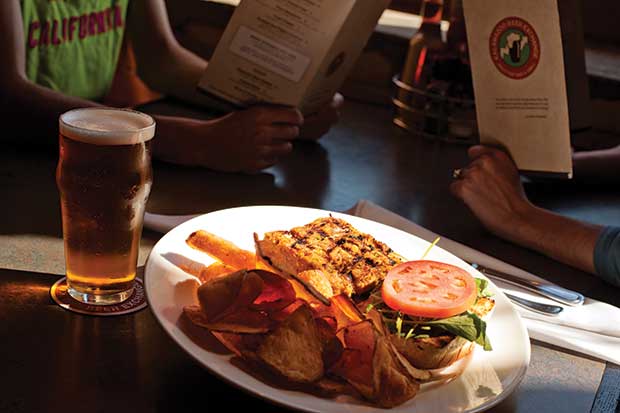 When Fuel, Kalamazoo’s only all-vegetarian restaurant, closed in June, it left a hole in the Kalamazoo dining industry.

Denise Miller, who was the head chef and owner of Fuel, is working on opening a new restaurant in Chicago, Sassafras Soul Cuisine, as part of an urban revitalization program in the Bronzeville neighborhood.

Great news for Miller and for Bronzeville, but what about Kalamazoo’s vegans and vegetarians? It turns out that Kalamazoo still has a lot to offer.

“It’s really not hard at all being a vegan in Kalamazoo,” says Rachel Kincaid, a local author who has been vegan for two and a half years. “When I first started, I lived in Boston and I thought moving here would make it hard for me, but there are a lot of places to eat.”

On the other hand, Kincaid, who dined at Fuel for brunch occasionally, says she will miss having a restaurant catering specifically to vegans.

“Sometimes when you’re vegan, people think you only like salads and carrot sticks, but you still like greasy diner food,” she says. “Those cravings don’t go away. When you wake up hung over on Sunday, you want a large, gross breakfast.”

Luckily, says Kincaid, there are other options in town, including the Studio Grill, at 312 W. Michigan Ave., which is owned and operated by the husband-and-wife team of Craig and Daphney Dotson. Daphney is vegan, and she echoes Kincaid’s sentiments.

“When I go out to eat, it’s often hard to find something that’s not a salad,” she says. “I try to offer different options because of that. The item on the menu that’s most near and dear to my heart is the pancakes. They have a nice cinnamon gingerbread flavor, and they’re dense. I call them ‘vegan junk food.’”

Dotson says that much of the time “junk food” is exactly what vegetarians and vegans want when they eat out.

“The first time I featured vegan biscuits and gravy, I used whole wheat to try and make them healthy, and people were like, ‘No. We want junk food.’”

The Studio Grill menu features a number of items that are exclusively vegan or vegetarian, but Daphney Dotson shrugs off the designation.

“Our philosophy is that food is art, regardless of eating preferences or dietary needs. I’m not into the terminology, and I hope anyone would try an item because it’s good, not because of whether or not it has meat. And we really, really encourage you to design your own items on the list – take ingredients out if you don’t want them, and add others in.”

Finding good vegan options at a place like Studio Grill might seem as unlikely as finding them at a brewery, where bar food is the typical fare, but Kinkaid says she’s also found them at the Kalamazoo Beer Exchange, at 211 E. Water St.

“The Kalamazoo Beer Exchange actually has some really good vegan options,” she says. “(It’s) one restaurant I go to because it has a good beer menu, and I have to order a salad with the chicken off of it, which is fine, but the chef at the Beer Exchange says he’s working on incorporating even more vegan options, and I really appreciate that.”

“We are one of the few places in Kalamazoo with good old-fashioned bar food that’s accessible to the savvy vegan diner, and we’re very proud of that,” she says. “Part of me wants to say that we focus hard on serving vegans and vegetarians, but, truth be told, we have a phenomenal chef who doesn’t see boundaries like that.”

Kelly says that head chef Bill Kennedy designs dishes based on whatever flavor he’s pursuing, and sometimes that effort doesn’t involve meat or animal products. Kelly, who describes herself as “100 percent carnivore,” touts the veggie burger.

Owner Habib Mandwee says he knows his restaurant appeals to vegetarians and vegans, but, like the owners of the Studio Grill and the Kalamazoo Beer Exchange, he didn’t plan it that way.

“It’s by default,” he says. “A lot of our food doesn’t have meat because Mediterranean dishes traditionally have an abundance of really good vegetables. Back home, vegetables are a meal. We don’t set out to eat vegetarian. It’s just what is there.”

Mandwee, who is originally from Iraq, says his restaurant boasts foods from countries spanning the Middle East, the Mediterranean and northern Africa, such as Lebanon, Syria, Greece and Morocco. The result is too many vegetarian and vegan options to name, including traditional fare like falafel, tabbouleh, dolmeh and hummus. One of Mandwee’s favorite vegetarian dishes is the Persian Batata.

Although vegans and vegetarians might have to keep waiting for another restaurant that caters specifically to them, for the time being Kincaid isn’t worried. Even though vegetarians and vegans choose their eating habits for a variety of reasons, including concerns for health and animal welfare or, in Kincaid’s case, to increase sustainability and combat world hunger, sometimes they’re just after some good food. “I’m not thinking about world hunger every time I bite into a sandwich,” Kincaid says. “Most of the time I just want to eat well and feel good about what I eat.” And on that front, Kalamazoo has the bases covered.

If you dig deeply into the menus of Kalamazoo’s restaurants, you find vegan and vegetarian options everywhere. Websites like happycow.net and common restaurant forums like Yelp and Google list such restaurants as Fourth Coast Café, Just Good Food and Saffron as “veg-friendly.” 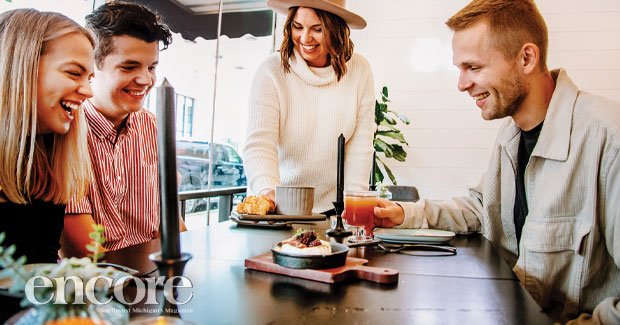